This is one of the largest pieces we have seen by Luteria Atencio outside of a museum! It is one of her tan pieces inspired by the Posuwi’i incised wares.  The early innovation in San Juan pottery was this style, although typically with a red rim and base.  The jar is polished on the rim and base.  The central area is fully designed with three bands of design.  The top has a sun and rain pattern.  The central area has very intricate clouds, rain, and lightning designs.  The complexity and variation of the design is exceptional!  The incised areas were slipped with mica which shines in the incised grooves of the jar.  It is signed on the bottom in the clay, “Luteria Atencio”. The jar is in very good condition with no chips, cracks, restoration or repair.  It is quite phenomenal in person!

Luteria was one of the original Eight San Juan potters who revived the art form in the 1930s.  She is a fascinating personality who promoted San Juan pottery and art throughout her career.  Her grandson, Mike Bird, is a well-known jeweler.  At San Juan, the Pueblo was renowned for their pottery but by about 1890 there were no potters left. In 1930 Regina Cata organized a pottery study group at San Juan Pueblo with the intent of revitalizing pottery production. The group studied ancient potsherds of wares made at San Juan in earlier times and selected Potsuwi‘i Incised Ware (1450-1500) as a basis for a contemporary pottery type. 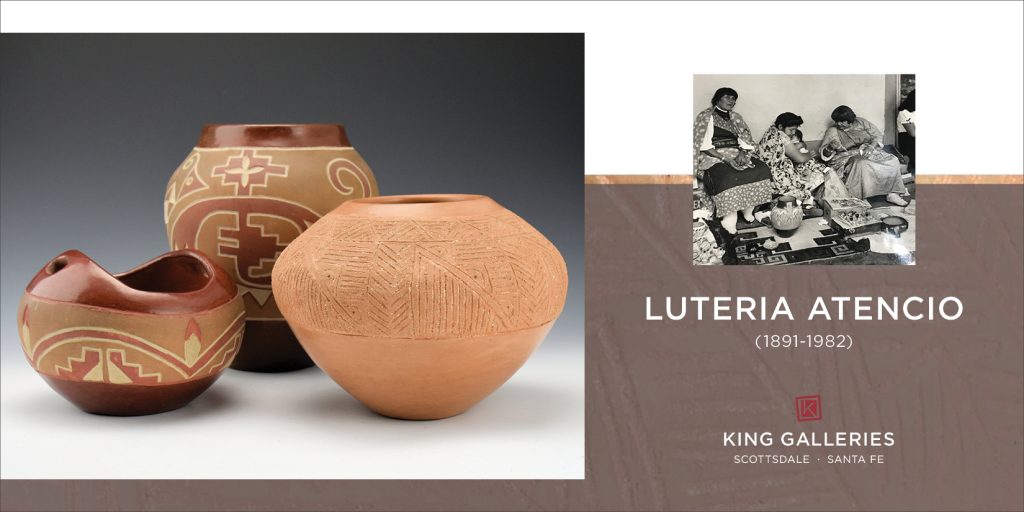 Luteria Atencio was one of the original Eight Ohkay Owingeh potters in 1930.  She was known for her intricately incised pottery.  In 1968 she helped Geronima Montoya found the O’ke Oweenge Crafts Cooperative.  By 1976 she had become blind and was no longer making pottery. She won numerous awards for her innovative pottery.  On August 26, 1961, the Albuquerque Journal wrote, “Indian Market winners, pottery Luteria Atencio of San Juan Pueblo.  Other winners Margaret Tafoya, Santana and Adam, Rose Gonzales. Lela and Luther, Lucy Lewis.”.  In 1954 the Gallup Independent wrote of the Ceremonials winners, “Second grand prize was given to Luteria Atencio of San Juan, judged for a group of pieces including “very symmetrical” burnished redware.”