Blue Corn is often best known for her polychrome pottery, she also made exquisite black-on-black pottery. She learned to make pottery from Maria Martinez at San Ildefonso. This jar is fully polished and patined with 32 feathers around the shoulder of the piece.  The shape is a classic one for Blue Corn, with the low shoulder and tall sides.  Around the neck is a mountain pattern. The contrast of the matte feathers and the highly polished surface works perfectly!  The jar is signed on the bottom in the clay “Blue Corn, San Ildefonso”.  It is in very good condition with no chips, cracks, restoration or repair. 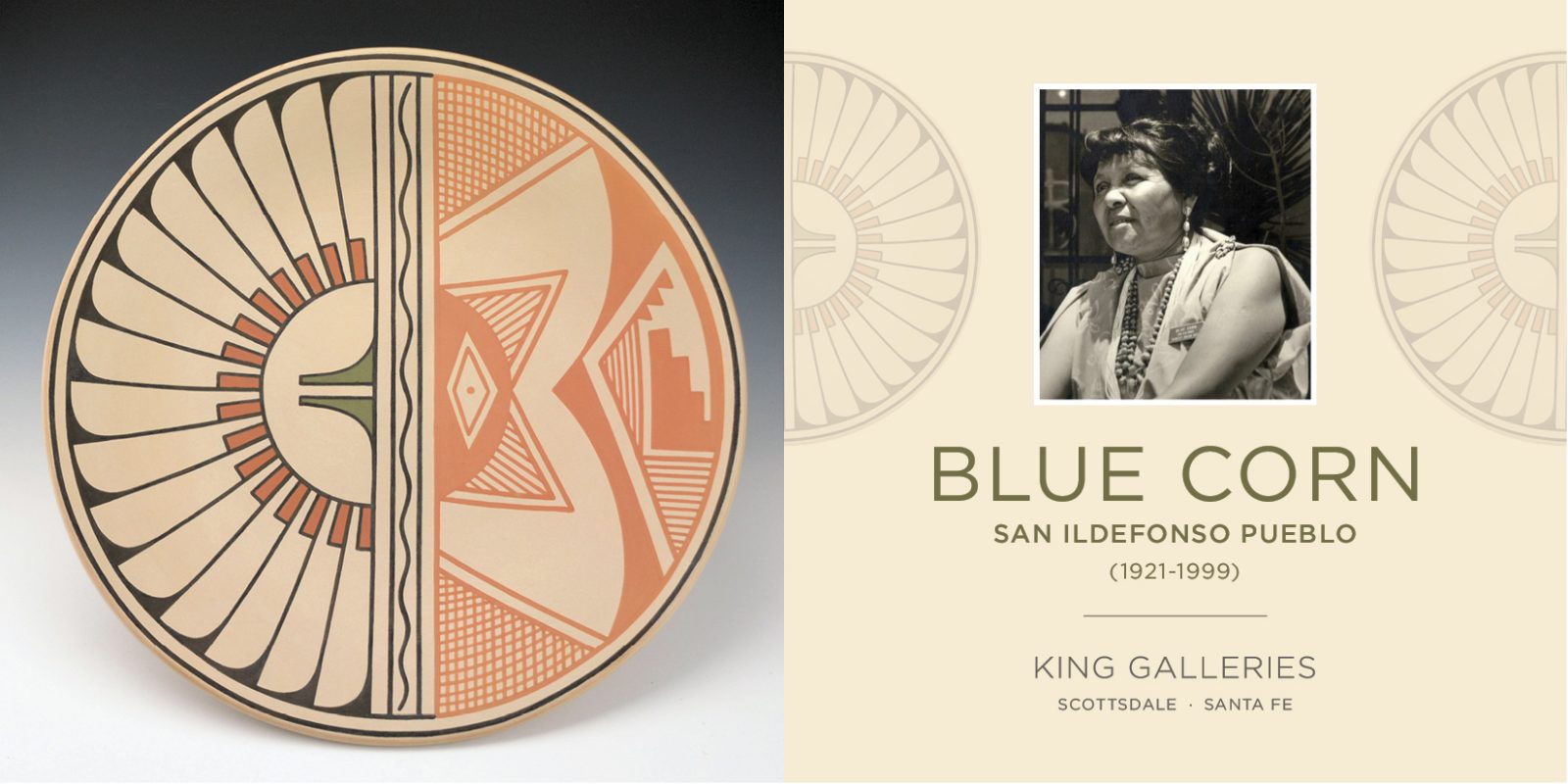 Blue Corn was born "Crucita Calabaza" at San Ildefonso Pueblo. She learned to make pottery from her mother. Blue Corn attended school at the Pueblo in her early years. She then went to Santa Fe Indian School, which was 24 miles from home. While attending Indian School in Santa Fe her mother and father died and she was sent to live with relatives in Southern California. Here she worked as a maid for a short time in Beverly Hills. At the age of 20, Blue Corn married Santiago 'Sandy' Calabaza who was a silversmith from Santo Domingo pueblo. Together they settled at San Ildefonso where she bore and raised ten children. During World War II, Blue Corn worked as a housecleaner in Los Alamos for the physicist, J. Robert Oppenheimer. She was renowned for her polychrome Blue Corn pottery but also for her distinctive blackware. During her career, she made black on black, redware and polychrome pots. In the late 1950s Santiago Calabaza quit his day job and began working full time with her, carving, painting and designing. In 1972 Joseph began working with Blue Corn after Santiago passed away. Blue Corn is especially noted for her finely polished slips and her experiments with clays and colors, creating exceptional polychrome pottery. In 1981 she won the "Governor's Award", which is New Mexico's highest artistic honor. Blue Corn Pottery was so exacting and innovative in her designs that over a decade after her passing, her pottery continues to be influential and highly sought after.  In both a testament to her skill as a potter and a reflection of her creativity, she was posthumously awarded the 2008 "Lifetime Achievement Award" by SWAIA and her work can also be found in "Legacy of Generations".