This bowl is by Ergil Vallo, also known as, “Dalawepi”.  The bowl is coil built, stone polished, and traditionally fired black.  It is fully incised with a Morning Katsina, Sunface, Mimbres Ram and Deer, Corn, and traditional Acoma patterns.  The background area is a “rainbow” of colors, for which he was known.  These were applied after the firing.  The piece is signed on the bottom in the clay, “Ergil Vallo, Dalawepi”.  It is in very good condition with no chips, cracks, restoration, or repair. 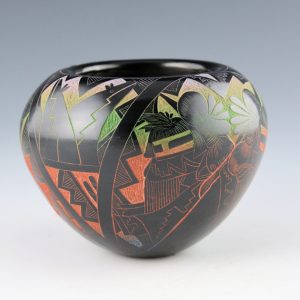 Ergil F. Vallo, Sr.  signed his pottery as "Dalawepi", which means "color of the rainbow".  He was half Acoma and half Hopi. Ergil was 21 years of age when he began creating his artwork. He was inspired to continue the family tradition of crafting art by observing many of his family members create their art. He wanted to be an active participant and add to the legacy of a long-lived tradition. Ergil primarily specialized in the incised black pottery. He used natural pollens and minerals to get the contrast in the brilliant colors on his designs which include Hopi kachinas, Mimbres animals, kiva steps and geometric designs.