This is a striking large jar by Preston Duwyenie.  The piece is coil built from micaceous clay.  The shape is a tall, elongated jar with a narrow asymmetric opening.  The jar is slipped in a micaceous clay and then fired black. The mica then gives the piece a very metallic appearance to the surface.  The silver pieces are inset into the clay after the firing.  Preston said of this style of jar:

“The imagery of the Water Drinking Maiden is clearly depicted on the tall vessel that itself contains the preciousness of water.  In the Pueblos of the Southwest there are certain dances where the women wear this elaborated headdress known as a “tablita” i.e. “Shalako” and “Butterfly Maiden” which I am alluding to with the silver pieces. The largest ingot is the headdress, the other two are the torso and legs.”

Each of the silver pieces is cast by Preston against cuttlefish bone, to create the distinctive texture.  The jar is signed on the bottom in the clay with Preston’s hallmark, which means “carried in beauty”.  There is certainly something both modern and ancient about this striking piece!   Preston is from Third Mesa at Hopi and taught ceramics for years at Institute of American Indian Art (IAIA) in Santa Fe.  He is married to pottery Debra Duwyenie and now resides in Santa Clara Pueblo.  Preston has won numerous awards for pottery, including “Best of Show” at the Heard Indian Market. 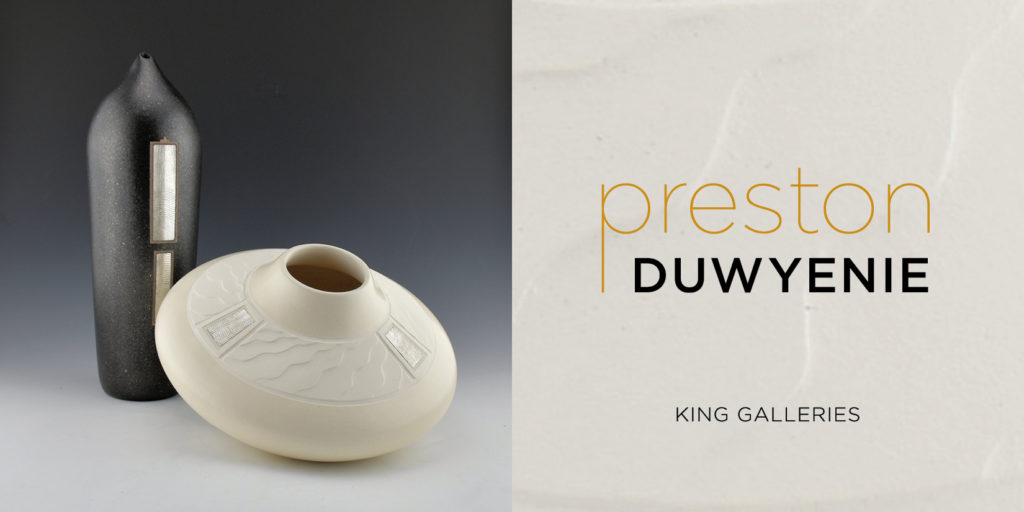 Preston Duwyenie is from Hotevilla, Third Mesa at Hopi.  He is renowned for his elegant pottery which is often highlighted with silver medallions.  He taught ceramics for years at the Institute of American Indian Art (IAIA) in Santa Fe. He is married to Santa Clara potter Debra Duwyenie and now resides at Santa Clara Pueblo. Preston has won numerous awards for pottery, including "Best of Show" at the Heard Indian Market. (Subscribe to new additions for this artist.)