This is a creative plate by Susan Folwell.  She is one of the exciting innovators in Pueblo pottery.  This plate is part of her series entitled, “Peering through Taos Light”.  The design for the jar comes from a painting by EI Couse entitled, “The Waterfall”. The front is both carved and painted. There Pueblo man is standing at the waterfall with the water trickling down. There are larger carved areas that are like droplets of water and one seems to be a reflection of the canyon at an earlier time.  The canyon wall to the left of the figure is etched with the Folwell family “x”s.  The plate also has the “x” as the stitching in leather.  Note the hand-tooled leather flowers on the plate.  They are part of a collaboration with National Endowment for the Arts artist James Jackson,  who is known for his leather.  The back of the plate has textured clay and a painted basket design in the center.  This reflects the traditional use of baskets as a base when starting pottery.  The “drops of water” see on the front, also leak through the stitching onto the back of the plate.  The plate is signed on the back, “Susan Folwell, The Waterfall”. Many pieces from this continuing series are currently on display in “Susan Folwell: Through the Looking Glass” at the Harwood Museum in Taos, NM.

“My newest pieces serve as commentaries and reflections on the classic Taos Society of Artists Work. I specifically want to focus on their portrayal of Native Women”.  Susan Folwell
Native Art Magazine, April 2018 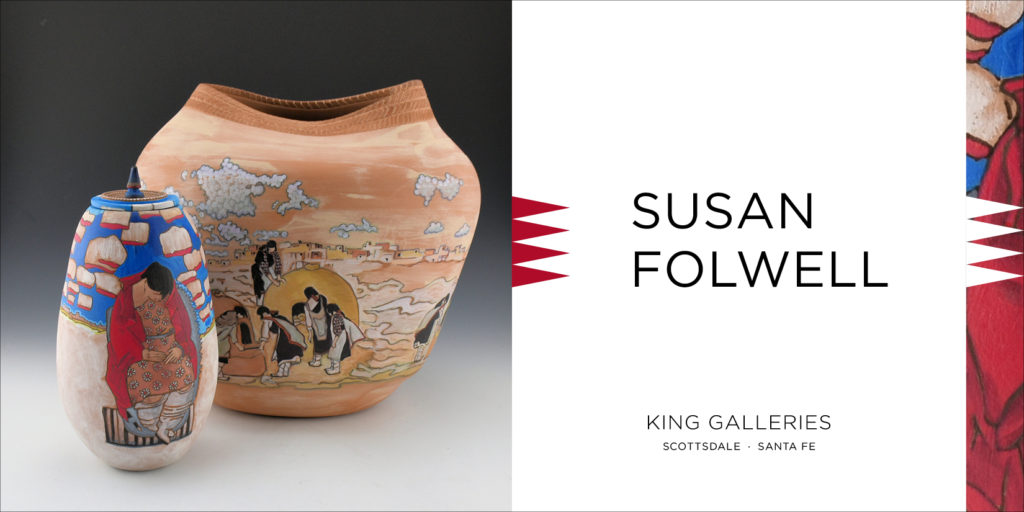 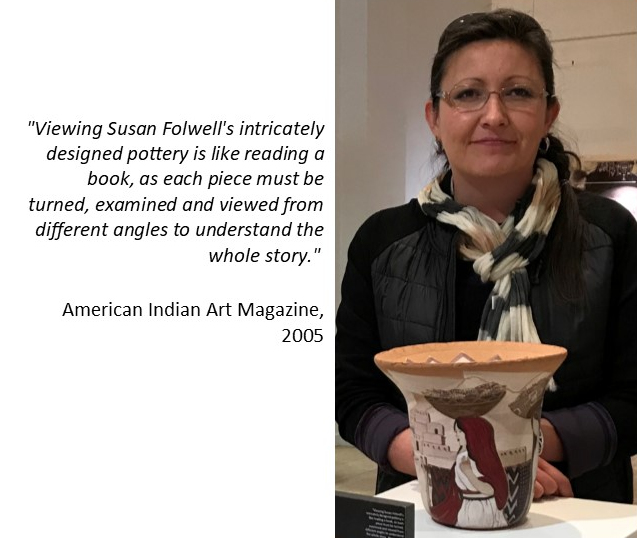 Susan Folwell is one of the exciting innovators in Pueblo pottery. Her work is native clay and inspired by traditional designs, but she is constantly experimenting with techniques and clays. She is a daughter of Jody Folwell and sister of Polly Rose Folwell. She has won numerous awards at events such as the Santa Fe Indian Market and the Heard Indian Market. She has been featured in several books, including "NDN," "Free Spirit" and others. Susan has said; "My Earliest recollection I can think of is that my mother gave me a ball of clay.  I decided I wanted to make a snake. It was a long flat tube. She said if you want people to be interested in it, it has to have some character.  I said I thought it had enough character. She said no, so she bent the tube and made it into an “S” and she pinched the nose.  I cried for like an hour, as she pinched the nose and I thought it was now a worm, she swore it was still a snake.  In the end, I was thrilled because it sold for $2.  I was hooked after that."