It’s great to have a new tile from Jason Garcia.  Jason has won numerous awards for his works in clay along with his Pueblo Revolt serigraph series.  This piece is made from native clay, painted with native clay slips, and traditionally fired.  This piece is part of his  “Tewa Tales of Suspense” series.  Each piece is inspired by graphic novels and early comic book art and the Pueblo Revolt of 1680.  On this tile the Pueblo warriors are both male and female, battling the conquistadors and the priests.  During the Pueblo Revolt of 1680 the Pueblo people, under Po’Pay drove the Spanish out of the New Mexico territory for over a decade and most of the Catholic churches were destroyed.  Jason has created exceptional detail in this piece and great coloration!   Jason’s clouds are always beautifully painted in coloration and subtlety and they always add to the intensity of the piece!   His piece is signed with his Tewa name, Okuu Pin, which means Turtle Mountain. 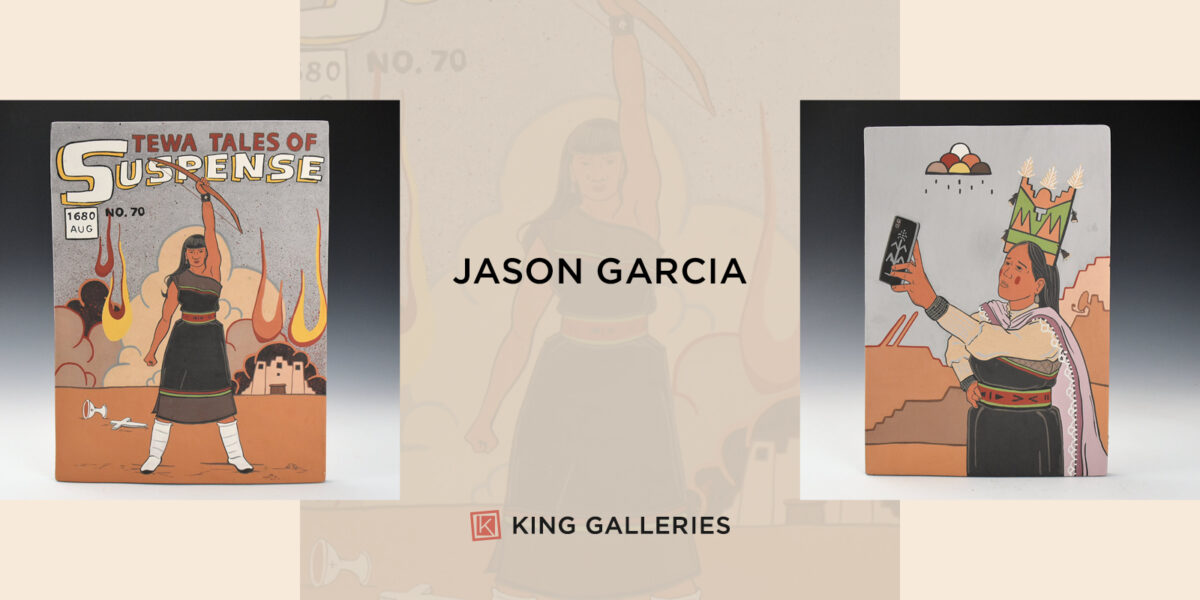 Jason Garcia (b.1973) is a son of noted potter Gloria “Goldenrod” Garcia and the nephew of Minnie Vigil, Thelma Talachy, Lois Gutierrez, and Tina Garcia. He has won numerous prestigious awards for his tiles at Santa Fe Indian Market, the Heard Museum Market. He has been featured in books and magazine articles on Native pottery. In 2007 he was a Dubin Fellowship recipient at the School of American Research in Santa Fe. Jason’s innovative style and artwork continue to make him one of the young leaders in Pueblo art. In 2016 he won “Best of Paintings” at Santa Fe Indian Market.