Tina Garcia was well known for her focus on traditional shape and plainware Santa Clara pottery. This is one of her large pieces with a double shoulder and an elongated neck.  The double shoulder on the jar is also called a “rainbow ridge”.  It has been said of the rainbow ridge:

“Sarafina was inspired by the legends of Santa Clara Pueblo, which were incorporated into her pottery. On the shoulder of her water jars, a second raised section or ‘double shoulder’ created a ‘rainbow band.’ This band was a prayer to keep the water from evaporating from the jar.” —Charles S. King, 2008, Born of Fire: The Life and Pottery of Margaret Tafoya

There are two large bear paws impressed into the clay.  The bear paw are part of a story where a bear led the Pueblo people to water during a drought.  The jar is fully stone polished and fired red.  It is signed on the bottom in the clay, “Tina Garcia”.  It is in excellent condition with no chips, cracks, restoration, or repair. 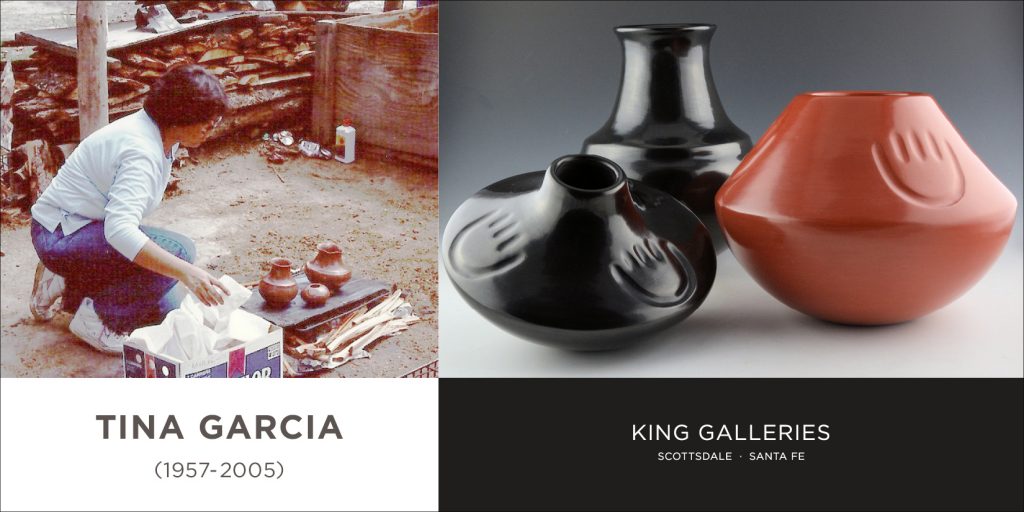 Tina Garcia was a sister of Greg Garcia, Virginia Garcia and John Garica.  She was a granddaughter of Severa Tafoya.  Tina won numerous awards for her pottery at Santa Fe Indian Market and the Heard Market. She was known for her use of traditional shapes and her exquisite polishing. Her pottery can be found at the Heard Museum, the Denver Art Museum and other museums around the country.