This is an unusual clay box by Ramona Gonzales.  Ramona was known for her delicately painted pottery.  This box is square in shape and fully polished. It has the same rain and mountain designs painted on all four sides. The lid has a stylized mountain or step pattern.  Do you see something unusual with the lid? The opening of the handle points to the short side,s not the long sides, like many other potters. This is a visual clue to Ramona’s boxes.  The signature is also her late 1920s style of signature.  It is signed on the bottom in the clay, “Ramona”.    It is in very good condition with no chips, cracks, restoration or repair. Because Ramona passed away so young, her boxes are among the most difficult to find.

There has long been a fascination with boxes, that is to say, square or rectangular clay vessels with flat, clay lids.  At the Pueblos of New Mexico, there is a historic precedent for these square-shaped pieces that were typically used for holding corn meal for Pueblo dances.  These boxes, however, typically did not have lids, and more likely, carved or raised ends.

In the 1920s there was a revival of boxes at San Ildefonso at the same time as the “new” black-on-black style of pottery.  The boxes had flat sides, but later, some were cylindrical.  They were painted on each side and they had a flat lid with a handle. The style of the handle, and its direction, were often indicative of the potter.  While some boxes may still have been made for cornmeal, most were made to hold cigarettes, small cigars, or curious, for the newly arriving tourist trade.  The potters of San Ildefonso in the 1920s were each adept at making these pieces.

Boxes are difficult to make and crack in drying and firing.  The same with the flat lids.  Not surprisingly, over the past 100 years, the boxes have not fared well as they are often cracked or chipped.  The lids are often missing or damaged.  They are not only one of the most difficult and sought-after forms, but also one that is the least resilient to time. 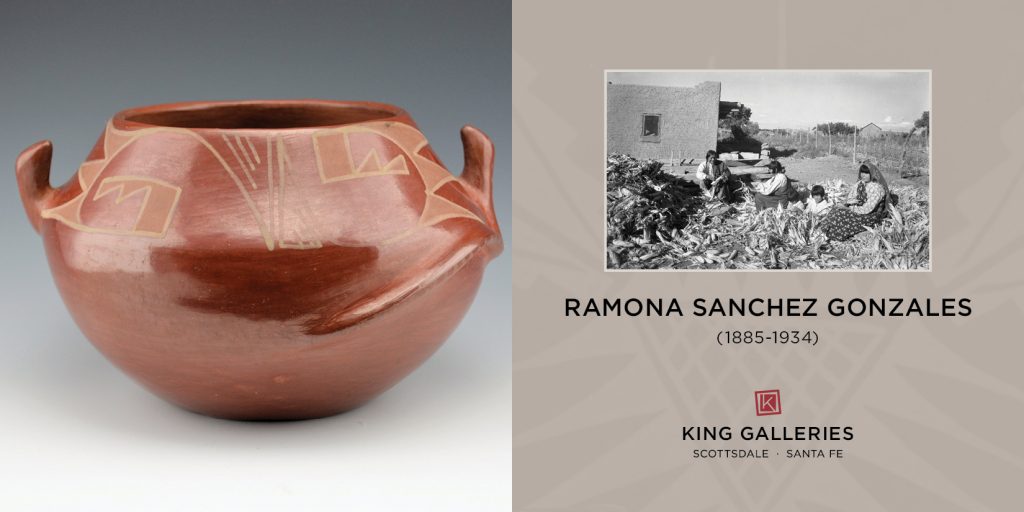 Ramona Gonzales was one of the early potters, along with Maria Martinez, to help promote the black-on-black pottery of San Ildefonso pueblo. She was the step-mother of Blue Corn & Lorenzo Gonzales and the mother-in-law of Rose Gonzales, whom she taught to make pottery. Her innovative pottery included not only black-on-black ware but also more intricate polychrome and red-on-red painted vessels. Her work is among the most difficult to find, as she signed her pieces for such a short time before her passing in 1934. Her innovative style continues in her descendants such as Tse-Pe Gonzales (1940-2000) and Russell Sanchez.