Lela Gutierrez began making pottery in the 1930s with her husband, Van Gutierrez.  After Van passed away in 1956 she continued to make pottery with her son, Luther Gutierrez. This jar is one of their classic shapes.  It has layers of design with cloud, mountain, rain, and star patterns. The colorations of the clays place it in the late 1930s or early 1940s.  The purple-colored clay was used by a variety of potters at that time. It is in very good condition with no chips, cracks, restoration, or repair. .   It is signed, “Lela Van” on the bottom. 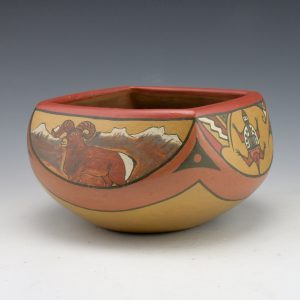 Lela Gutierrez & Van Gutierrez began making polychrome pottery in the early 1930s. There had been a tradition of doing polychrome work at the Pueblo, but few potters continued to paint in this style, and the popularity of the black-on-black pottery quickly overtook it. Lela would make the pottery, and Van would paint the designs using native clay slips. Lela and Van's pottery have influenced potters to this day, including descendant Jason Garcia, who continues in a similar polychrome pottery style, updated for the new century. Lela and Van's work can be found in museums nationwide. UPDATED NOTE:  We have corrected the birth year for Van Gutierrez to 1885 from further research through both SS and Census dates. Subscribe to New Additions for this artist