Daisy Hooee Nampeyo is one of the extraordinary Hopi-Tewa women making pottery in the last century.  She was a daughter of Annie Nampeyo Healing and a granddaughter of Nampeyo of Hano.  Her daughter is Shirley Benn and her granddaughter Cheryl Naha Nampeyo, are both potters.  Daisy spent many of her formative years with her grandmother and learned how to make pottery at a very early age.  The last photo is one of Daisy with Nampeyo of Hano.  The amazing part of her story is that Daisy began to lose her vision and had an operation to remove cataracts due to an infection.  She then attended the L’Ecole des Beaux-Arts in Paris through her benefactor, Anita Baldwin. When she returned to Hopi, she married Ray Naha, then Leo Pablano (from Zuni), and finally Sidney Hooee from Zuni.  Her life story is as fascinating as her pottery. This jar is an exceptional early piece of her work with her grandmother.  What you can’t see, but can feel (and see in person), is that the surface and the clay definitely have the feel of Nampeyo’s pottery.  It is almost the kind of piece you can imagine her working on next to Nampeyo. The bowl is tightly painted with a flowing hummingbird or hummingbird moth design.  There are the birds with their red-polished heads near the neck of the bowl.  As the piece is turned, there is a stylized version of the bird along with rain designs.  The bowl was patined with bee-weed and red clay slip.  It was traditionally fired.  It is creative in design, charming in form, and historic in appearance.  The bowl is in very good condition with no chips, cracks, restoration or repair.  It is signed on the bottom, “Daisy Nampeyo”.   Definitely a piece of history!

“Did you know the design on this bowl is usually called a “hummingbird” pattern by Hopi-Tewa potters. However, in reality, it is most likely the depiction of a hawk or “hummingbird” moth (Manduca quinquemaculata), which has a flexible proboscis.  The figure above the large eye represents the feathery antennae of the hawk moth.  It is often depcited with the datura plant on which the hawk moth feeds.” 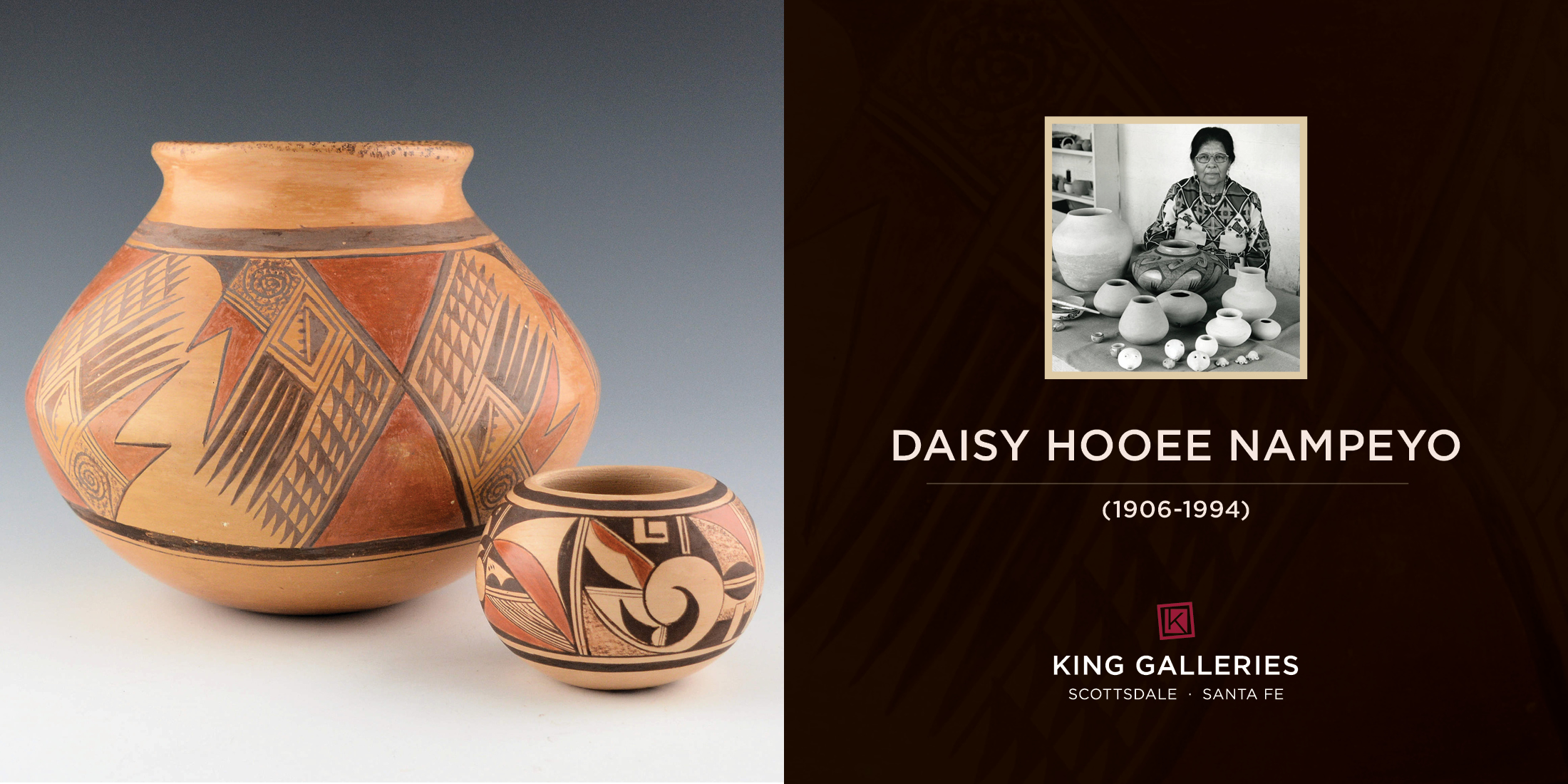 Daisy Hooee Nampeyo (1906-1994) was a daughter of Annie Nampeyo Healing and a granddaughter of Nampeyo of Hano.  Her daughter Shirley Benn and granddaughter Cheryl Naha Nampeyo continue the family pottery-making tradition.  She was born into the Corn Clan of her mother but was named Tobacco Flower after the Tobacco Clan of her father. The name Daisy was given to her by a field nurse at the government agency on First Mesa. Although she was born at Hano, the family moved to a new village called Polacca at the base of First Mesa.  Daisy spent many of her formative years with her grandmother and learned how to make pottery at a very early age. Like many starting potters, her early pottery was not the best but she had an excellent teacher in Nampeyo and soon began to create wonderful pieces and used designs from pottery shards she found at Sikyatki.

When she was still quite young, she began to lose her vision. She was determined to continue making pottery so she agreed to have an operation to remove cataracts that had developed as a result of an infection. The operation was paid for by a wealthy heiress from California named Anita Baldwin. Daisy stayed with Anita for several years while her eyes healed. She returned to Polacca during the summers.  Anita Baldwin sent Daisy to L’Ecole des Beaux-Arts in Paris to study painting and sculpture. Anita ultimately took Daisy around the world to expose her to other forms of art and sculpture.  When her mother Annie Healing’s health began to deteriorate Daisy returned to Hopi. She married Ray Naha with whom she had three children. She divorced Ray and then married Leo Poblano from Zuni. He was famous for his jewelry and Daisy began to make jewelry and carved figures along with her pottery. After Leo’s death, she returned to First Mesa to work with her sister Rachel Namingha Nampeyo. Her last marriage was to Sidney Hooee, again from Zuni. At this time she began teaching pottery-making at Zuni.