Marlow Katoney is an exceptional Navajo weaver.  His weavings have been featured in numerous museum exhibits along with being the recipient of a fellowship at SAR.  His weaving transcends the traditional regional styles.  He creates pieces inspired by stories of his own life, yet with a connection to the traditional design elements and traditional weaving techniques of Navajo rugs.  We are very pleased to represent his new work at our galleries in Santa Fe and Scottsdale.

This piece is entitled, “Static | Electric”.   It takes much of its style and dramatic coloration from Germantown and Pictorial Rugs.  The primary color is fluorescent green, which is a Germantown coloration. Marlowe said of this piece:

This piece is about when I was going to school in Tucson, AZ at the U of A School of Art.  Next to my dormitory was the School of Performing Arts.   Every day when I would go to class, there would be a student from the school of performing art who was a drag queen.  She would take on various roles, from brazen to polite, each time I walked by.  This piece refers to someone taking on many personalities, juggling them, and keeping their sanity.  The idea came from watching the Actors Studio, and how one of the actors said it takes months to take on a role. The Drag Queen popped into my mind.  It made sense how she would become so invested in her “roles” that she become that person.  It makes me think of what an artist goes through to become a role.  They have to get to a point where they can channel the character mentality.  For me, everything is narrative as a pictorial weaver.  When you get into the “role” and the characters start to speak to you.  The monarch butterfly is her own personality.  In the center is “Static” of all the different characters she is trying to juggle.”

The piece is signed into the weaving with his “zong” character.  It is a striking and creative piece that certainly captures Marlowe’s narrative in weaving. 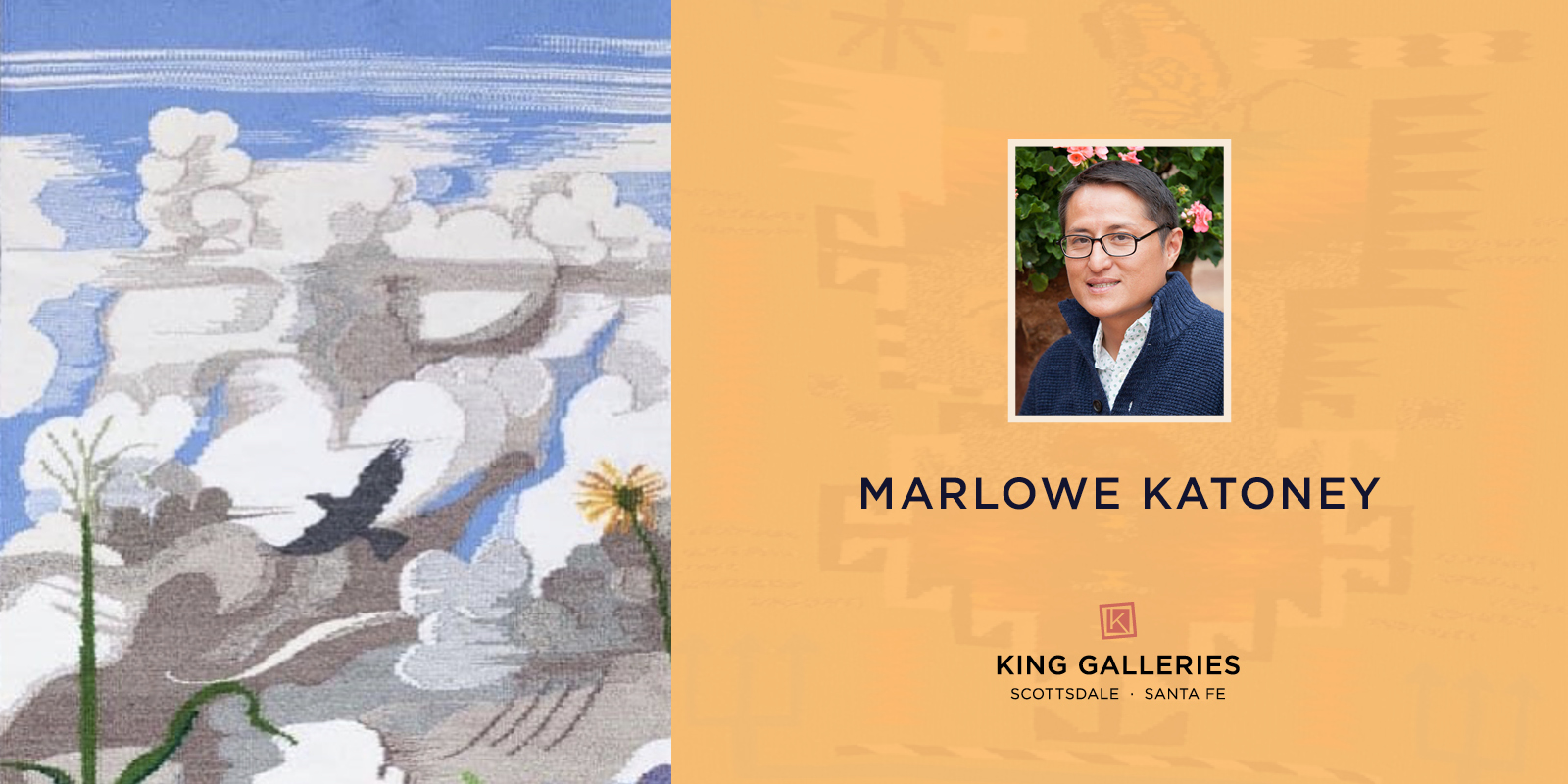 Arizona artist Marlowe Katoney (Diné) trained as a painter while studying at the University of Arizona. In 2010 his maternal grandmother taught him to weave, and his career took off as people discovered his work at rug auctions and collectors began commissioning pieces. His weaving incorporates traditional Navajo designs into contemporary pictorial. His weavings have not only won numerous awards, but also been in museum exhibitions around the country from the Heard Museum to the Tucson Museum of Art and the Museum of Contemporary Native Arts.