This is a complex large open bowl by Jacob Koopee. The bowl is coil-built and stone polished.  It is painted with bee-weed (black) and different colors of clay.  The bowl has six katsina figures around the rim. They alternate between the Grandmother Katsina and Qooqole katsina.  The Qooqoole is known as the “keeper of the key” to the kiva.  The Grandmother katsina appears at the Bean Dance each year.  They are two of the most often depicted katsinas on Jake’s pottery.  They are very delicately painted with thin lines.  What is exceptional on this bowl is not the rim, but the interior. The inside of the bowl is fully painted. There is a fine-line migration pattern along with Sikyatki birds.  In addition, there are small dragonflies.  Jake was known for his thin lines in painting and the precision and complexity of the lines in this bowl are a testament to that skill!  The bowl was traditionally fired, so there are blushes across the surface of the piece.  It is signed on the bottom with his hallmark Flute player.  The bowl is in excellent condition with no chips, cracks, restoration, or repair.   Jake won numerous awards during his career including “Best of Show” in 2005 at both Santa Fe Indian Market and the Heard Museum Market.  I was lucky to have been a pottery judge both years at both events, and it was exciting to see an artist create such dynamic work.

Men aren’t supposed to make pottery and women aren’t supposed to carve. And it’s just another world that you go deep into. My grandmother told me, ‘Well, if you’re gonna make pottery, you gotta know everything behind it, and you do know what you’re doing.  I look at the pot as traditional and nontraditional. I went into both worlds. I am well noted for making enormous pieces. I also put a lot of kachinas on my pottery. My passion of art in pottery has made me realize the importance of sharing it with others. Mainly with the younger generation.  I collect my own materials, I make my own clay, mold my pots (hand-coiled), make my own paint (from wild mustard), paint with yucca brushes, and fire with sheep manure. I will continue this tradition and keep the children and grown-ups educated on the undying art of pottery, just like my grandmothers did!!” Jacob Koopee, Jr,, Spoken Through Clay 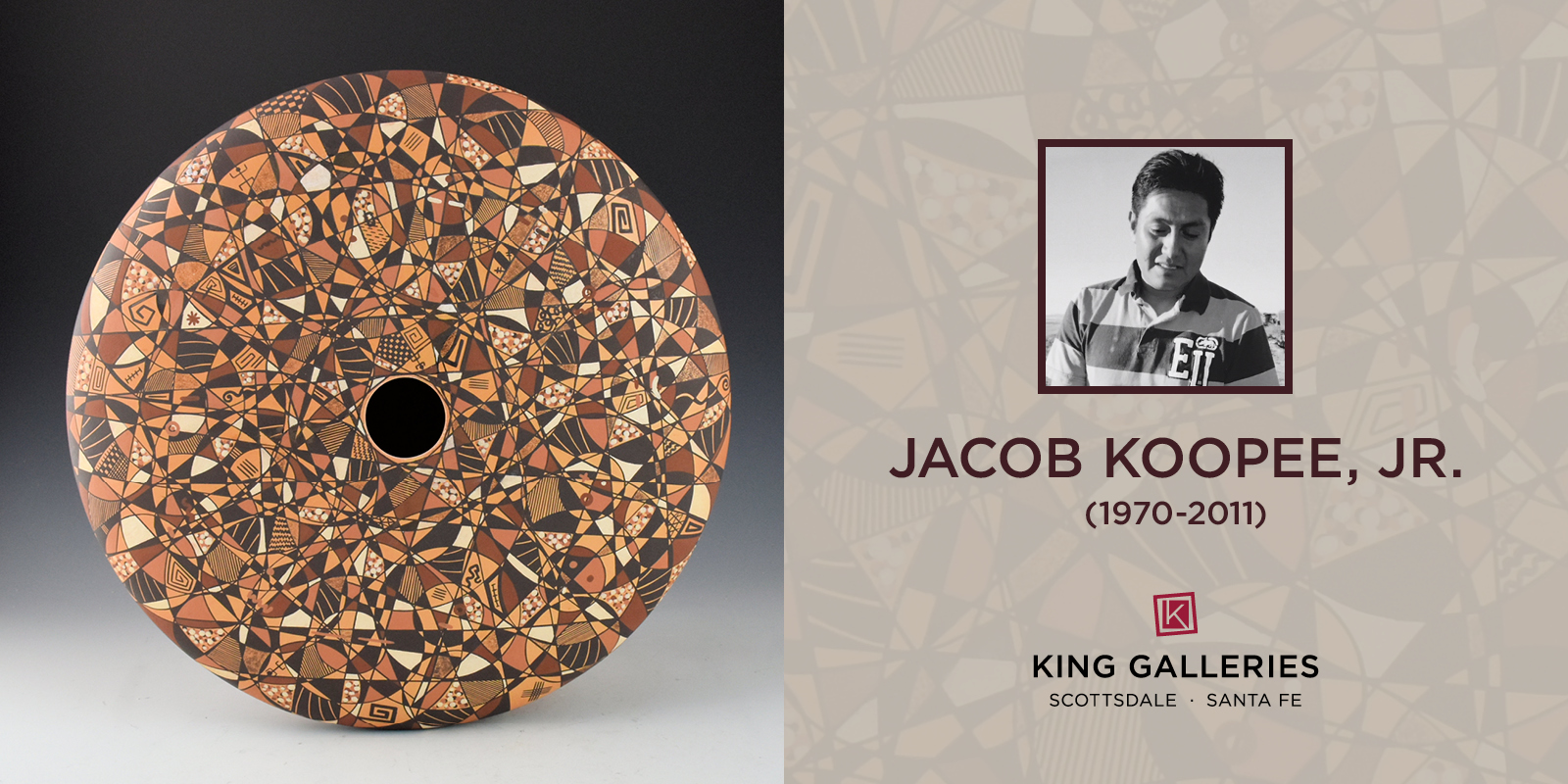 Jacob was the great-great-grandson of Hopi - Tewa Pottery Matriarch, Nampeyo of Hano.  He was also the great-grandson of Nellie Nampeyo Douma, grandson of Marie Koopee and Jacob Koopee. Sr. and Georgia Dewakuku Koopee. He was also the nephew of Dextra Quotskuyva, who inspired much of his pottery in design. His pottery was innovative and creative in design, and his precision in painting was renowned. Jake acquired numerous awards for his pottery during his career, including; "Best of Show" in 2005 at Santa Fe Indian Market and the Heard Museum Market. I was lucky to have been a pottery judge both years at both events, and it was exciting to see an artist create such dynamic work. His pieces can be found in museums around the country, and his innovative style of painting continues to set his work apart among other potters.