Drew Lewis was a son of noted potter Lucy M. Lewis.  Let me start off by saying I cant remember when we have had such a huge piece from Acoma.  The large seed bowl is 18″ wide!  In addition, it is certainly one of the most creative pieces I’ve seen by Drew.  The top half is painted with a lighning design. It is tightly painted and the designs flow across the surface of the bowl. The lid has a male figure on it, surrounded by squash, antelope, rabbit, corn, and a rainbow design.  He was made to hold a stick so it looks like he is drawing the designs.  The piece is from 1986 and it has a second-place ribbon from Santa Fe Indian Market from that year.  The original owner was a good friend of Drew’s and was said to have commissioned it and then let him enter it for Market and purchased it there.  Both the lid and the bowl are signed on the bottom in the clay. There is a dot on the top of the rim and under the lid as to where the lid should be placed.  It is in very good condition with no chips, cracks, restoration, or repair.  To say that this is owning a piece of Pueblo and Acoma history, may be an understatement.  It’s an extraordinary piece by Drew and possibly the largest piece of his career. 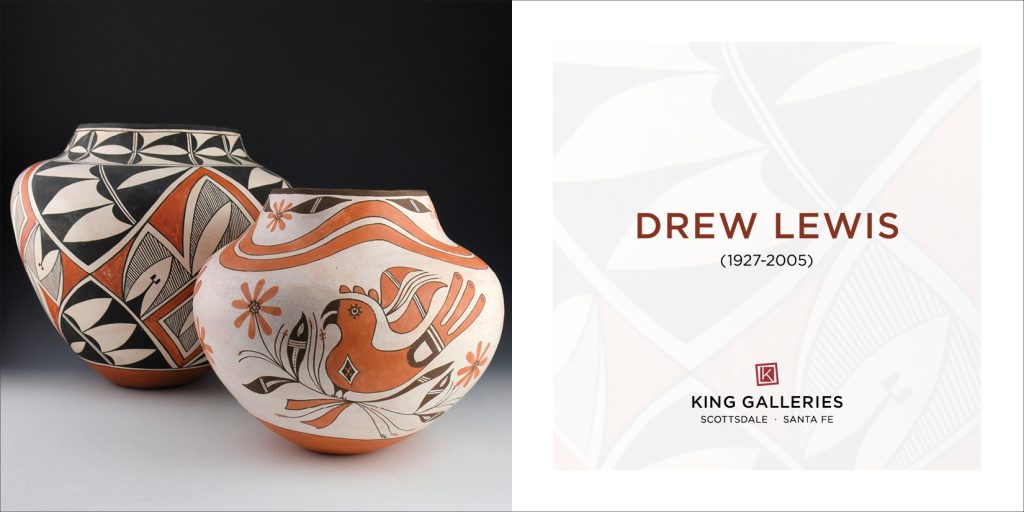 Drew Lewis was a son of noted potter Lucy M. Lewis. He was also a brother of Carmel, Dolores, and Emma Lewis. He was one of the few men at Acoma to begin making pottery in the 1970s and '80s. His work was known for its use of more modern forms but traditional designs.