This is an exceptional large jar by Maximiliana “Anna” Martinez.  She was a sister of Maria Martinez.   It is a fully polished jar and a classic shape with the low shoulder and sloping sides.  The design around the shoulder almost looks like an inverted feather, but there are step (lightning) and rain (lines) designs.  Typical of her pottery and imagery, it is tightly painted and highly polished.  It is in very good condition with no chips, cracks, restoration or repair.  It is signed on the bottom in the clay, “Anna”.  It is not often that we see pieces of her work from this period in this size and design. 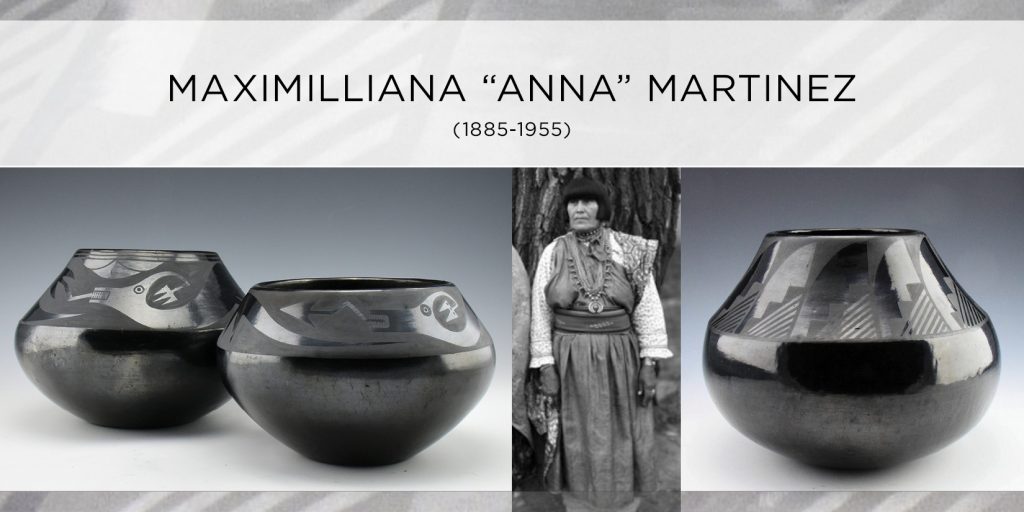 Maximiliana "Anna" Montoya was the eldest sister of noted potter Maria Martinez (1887-1980). She was married to Cresencio Martinez (1879-1918), who was a brother of Tonita Roybal. After the discovery of the process to make black-on-black pottery, Anna quickly adopted the style to her work. Cresencio painted many of their early polychrome pieces, but after his death in 1918 Anna painted her own pieces. She became an accomplished painter and Maria noted that "everyone bothered Anna to put designs" on their pottery.