Lawrence Namoki has been known for a variety of styles in his pottery.  This is a large seedpot from the early 1990s. The designs are carved into the clay and then slipped with various clay slips for coloration.  One side has a large sunface which is both incised into the clay and also slipped with five different colors of clay!  There are intricate sash designs on the sides of the Sun.  The opposite side has a Hemis Mana and a Longhair Katinas carved into the clay in relief.  Note the hands and feathers below the two figures.  The base of the seedpot is slipped so that it looks like wood.  This style was created by Lawrence Namoki as well as Thomas Polacca, and Wallace Youvella as in the 1970s Hopi men were prohibited from painting traditional designs on pottery. In response, they began to carve into the clay giving it the appearance of carved wood, much like the katsinas which men would carve.  The piece is signed on the bottom in the clay, “Lawrence Namoki”.  It is in very good condition with no chips, cracks, restoration or repair.

Lawrence Namoki is from Walpi, the oldest village on First Mesa at Hopi. He began his art career carving miniature katchina in wood. In the 1980's he began making pottery which was deeply carved and the imagery was mostly focused on Katsina figures. The surfaces were slipped and painted to give the appearance of wood. Today, his work has taken a new turn with imagery based on Hopi myths and history. He says of his pottery, "The type of artwork I do cannot be taught in any educational institute. Only a true Hopi can do what I do and he must understand the Hopi culture and the life of a Hopi to do artwork of this type. All my artwork on pottery is based on Hopi Culture and Myths.” Lawrence has won numerous awards for his pottery at events such as Santa Fe Indian Market and the Heard Indian Market. His pottery can also be found in the permanent collections of the Denver Art Museum, the Smithsonian and the Heard Museum. 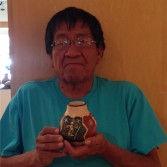