This jar by Jody Naranjo is from 2011.  It is entitled, “Ship in a Bottle”.  It is a charming piece with a polished neck and sides.  On each side is a “ship”, which is polished.  The top half is etched with birds while the bottom half is etched with fish.  All the fish and birds are matte in contrast to the polished neck and boats on each side.  The area behind the fish and birds is also designed.  The neck is polished and fully designed with Jody’s rug pattern.  It is subtle but adds to the overall impact of the piece.  The jar is signed, “Jody Naranjo” and it is in excellent condition with no chips, cracks, restoration or repair.  Jody said of her designing:

“As for the design on the top and the bottom, it was the kiva step in the beginning. My family used them but just parts of them, the top half of the design. I started making them just around the top of the pot in one row. Then it became two rows and three rows, and then I started filling in between them.  Now it looks more like a textile, and it’s a signature pattern that I do on everything.” Jody Naranjo, Spoken Through Clay 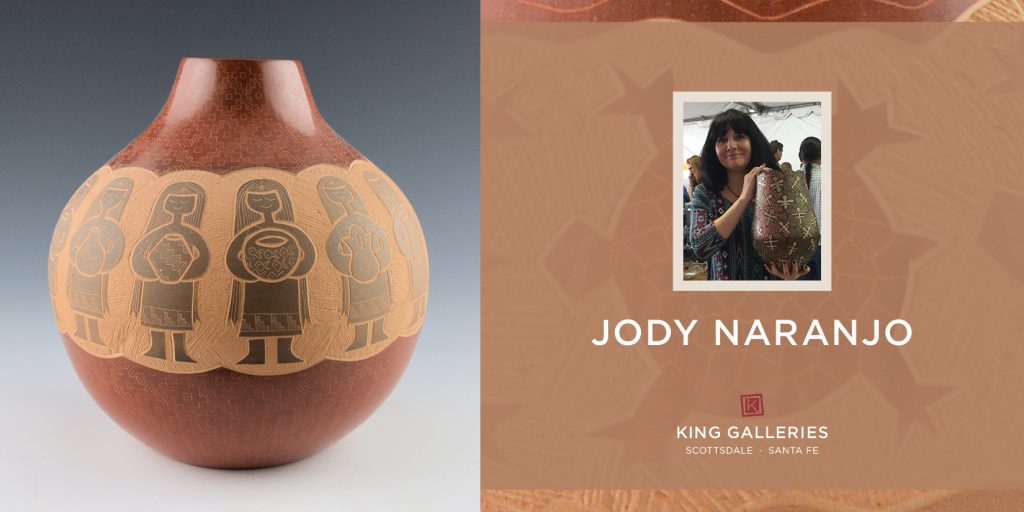 Jody Naranjo comes from a family of renown artists and potters, including her mother Dolly Naranjo, aunts Jody Folwell, Nora Naranjo-Morse and Rina Swentzell She has won numerous major awards for her pottery including "Best of Pottery" at Santa Fe Indian Market and "Best of Show" at the Eiteljorg Museum Indian Market in addition to a variety of other blue ribbon prizes. Her pottery has been featured in numerous books and it is in the permanent collection of museums worldwide.