This piece by Virgil Ortiz is inspired by the classic monos figures and their use of social commentary.  The figure is made from native clay and painted with bee-weed (black) and red clay slips.  This piece was entitled, “Smoking, Hot”.  She has a cigarette in her hand and a painted squash blossom necklace around her neck.  She is painted with a “fringe” halter top and geometric design shorts.  Her long boots are slipped with red clay.  Virgil is always able to create a commentary on people and society through his clay work and the monos figures.  The Monos figures were originally made at Cochiti Pueblo in the 1880s as a cultural response to the arrival of people on the railroads. The figure was made in 2009.  It is signed, “Virgil Ortiz”.  It is in excellent condition with no chips, cracks, restoration, or repair. 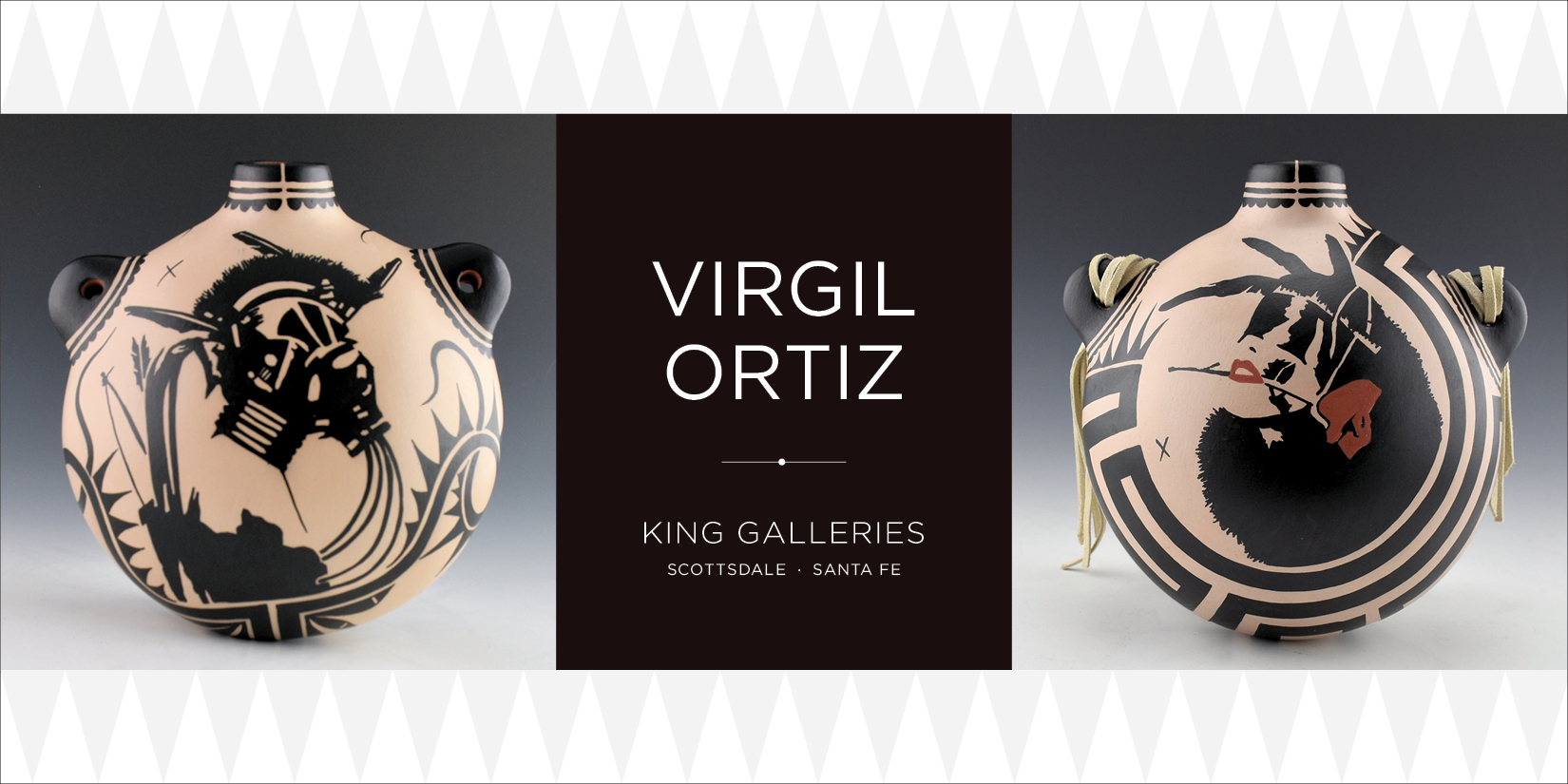 Virgil Ortiz is one of the most innovative potters working today. He is a son of noted potter Seferina Ortiz and grandson of Laurencita Herrera. His sisters Janice, Inez, and Joyce are also potters and his niece, Lisa Holt. He encourages his nieces and nephews also to continue making traditional pottery. His work has been featured in numerous museum exhibits nationwide, and he is also known for his fashion designs. He has won multiple awards at Santa Fe Indian Market, the Heard Museum Indian Market, and other events. His pottery can be found in museums worldwide. “The thought has never crossed my mind to be anything other than an artist and fashion designer. Art is in my blood”, says Virgil Ortiz, a Cochiti Pueblo Native. Sought by celebrities, royalty, and collectors, American Indian artist Virgil Ortiz artworks move into a new era combining art, décor, fashion, video, and film. Hailing from a family of celebrated Pueblo potters.  From the National Museum of the American Indian in New York, and Denver Art Museum, to the Hertogenbosch Museum in The Netherlands, and Foundation, and Cartier’s Paris, France.  Virgil Ortiz’s exquisite clay works are exhibited worldwide. Born in 1969, the youngest of six children, Ortiz grew up in a creative environment.  Storytelling, collecting clay, gathering wild plants, and producing figurative pottery was part of everyday life. His grandmother Laurencita Herrera and his mother, Seferina Ortiz, were both renowned Pueblo potters.  “I didn’t even know it was art that was being produced while I was growing up,” he remembers. Virgil Ortiz, who works and lives in Cochiti Pueblo, New Mexico, has worked very hard and has had a few lucky breaks.  His efforts have propelled him to a preeminent place among contemporary Native artists. After a highly successful collaboration with fashion mogul Donna Karan, he developed boldly patterned textiles based on his graphic decorative painting.  Ortiz launched his fashion line. His designs are captivating, provocative, and edgy, thus creating a high demand. His sharp laser-cut leather jackets, swinging taffeta skirts, cashmere sweaters, and silk scarves echo the Pueblo pottery's voluminous contours and sinuous motifs. He showcases the richness of indigenous, high fashion, and compelling storytelling of Pueblo culture and history. Virgil Ortiz debut Colorblind, his all-new T-shirt collection blending art, vibrant colors, and graphic images.  Each of which portrays his interpretation of the historic Pueblo Revolt of 1680 – the First American Revolution. “I want to pay tribute to our great leader Po’pay and ancestors that lived and walked on our lands, and respect that their spirit will live on through me.” Creating a global awareness of Pueblo culture is reflected in the design components that reach past a traditional Ortiz sculpture.  His art form delves into an untapped age of décor elements that honor a prosperous civilization with skill and vision.  Ortiz also designed 'Indigenous Imprints'®, a carpet collection designed exclusively for Aqua Hospitality Carpets. This collection consists of twenty unique patterns.  His design concepts are a fascinating balance between contemporary and traditional for guest rooms, corridors, and public spaces in some of the most exclusive hotels and resorts worldwide. 'Indigenous Imprint's® is a natural progression toward leading-edge furnishings and adornment that capture the elegance and spirit of Ortiz’s inspiration. Beyond the notoriety of his artistic talent, Ortiz’s professional agenda centers on a lifelong dream to create opportunities for children in his tribal community that reflects his ancestors' legacy. “It’s important to recognize that Pueblo communities are very much alive.  They have a vitality level that speaks to generations of strength, persistence, brilliance, and thriving energy. I have something vital to do before I go. I want to preserve my culture and inspire our youth to accomplish whatever it is they dream of being.” – Virgil Ortiz