This is a stunning gunmetal fired box by Russell Sanchez.  The shape is inspired by the historic San Ildefonso boxes from the 1920’s.  The box is fully polished and fired a gunmetal coloration.  On two of the sides, there are mountain lions etched away.  Each mountain lion has an inset piece of Lone Mountain Turquoise.  On the ends are mountain designs with inset hematite beads.  Around the base are two bands of hematite hei-shi beads.  The surround a checkerboard band which is matte and mica slipped.   The lid is a mountain lion lying down and it is fully polished while the base of the lid is mica.  The style of the mountain lion is reminiscent of the stone mountain lions in Bandolier (see last photo).  Russell says here that the mountain lions represent the twin war gods who protect the village. The box has both a striking historic appearance and a contemporary feel.   The box is signed on the bottom, as is the lid. 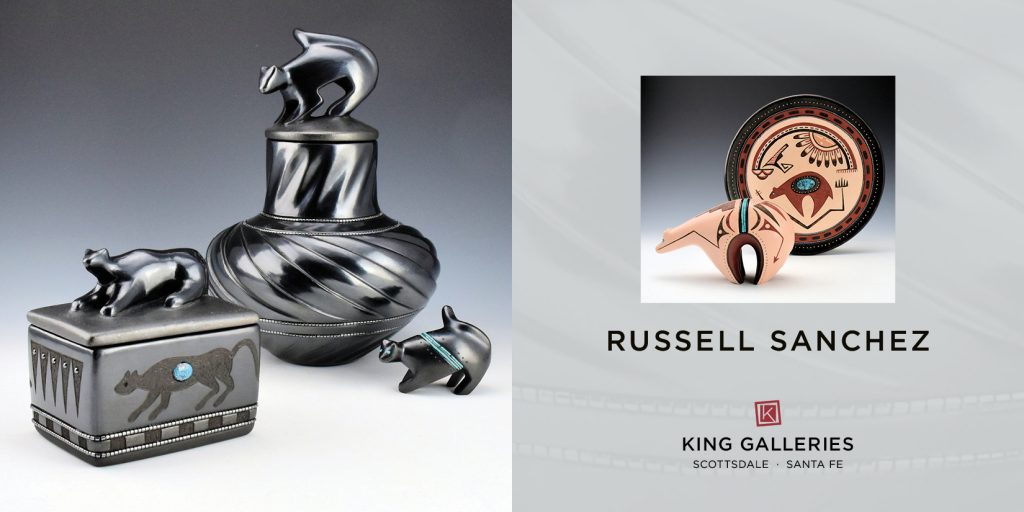 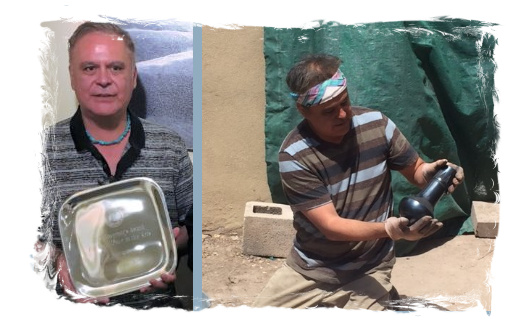 Russell Sanchez (b. 1963) continues to be one of the master innovators in Pueblo pottery. Each piece he creates is perfectly hand-coiled, stone polished, then etched, inlaid, designed, and fired with utilizing traditional Native American pottery methods. Russell learned to make pottery from his great-aunt, noted potter and pottery matriarch Rose Gonzales (1900-1989.) He started making pottery at the early age of 12 years old on the San Ildefonso Pueblo. Russell has received numerous awards and recognition for his pottery throughout his career. Including such distinctions as 'Best of Division' at both the Santa Fe Indian Market and the Heard Indian Market. In 2007 Russell's art was presented in the feature article of the Fall issue of Native People's Magazine. In 2011, Russell was awarded the exclusive 'Tony Da Award' for Pottery in Santa Fe. Most recently, Russell was a recipient of the 'New Mexico Governor's Award for Excellence in Art 2017.  In 2019 he won "Best of Pottery" at Santa Fe Indian Market.  At the same time, he was involved in a major exhibition of historic San Ildefonso pottery at the Museum of Indian Arts and Culture in Santa Fe, NM.  His work remains on a continued path of excellence and creativity. (Subscribe to new additions for this artist.)