Mae Tapia was known for her intricately etched miniature pottery. She was a daughter of potters Joe and Santanita Suazo.  Her sisters include Martha Suazo (the wife of Art Cody Haungooah), Margie Naranjo, Candelaria Suazo, and Shirley Duran.  This is a tall seed jar.  It is fully polished and fired black.  There is a medallion with an etched Yei figure.  It is surrounded by rain and cloud designs.  The medallion area is sienna while the rest of the piece is a deep black.  The sienna is created by adding heat to the area after firing.  The jar is signed on the bottom, “Mae Tapia”.  It is in excellent condition with no chips, cracks, restoration, or repair.  It has an interesting provenance, as it was originally purchased at the Popovi Da studio in San Ildefonso in 1992.  The little tag on the bottom was the original inventory tag with code and date, so I left it on. 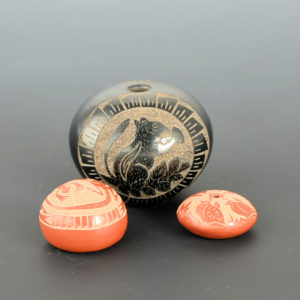 Mae Tapia was a daughter of noted potter Santanita Suazo. She was known for her miniature pottery and use of Mimbres inspired designs. She won numerous awards at Santa Fe Indian Market, Gallup Ceremonials and other events.