Thomas Tenorio is from the Aguilar family of Kewa Pueblo.  Amazingly, he taught himself to make pottery!  This jar is from the late 1990s when he first started making pottery.  The bowl s coil built and the interior is fully carved!  There is a central medallion with rain designs and four sections with Kewa style birds.  The outer rim has a plant design.  The various colors on the bowl enhance the carving and the design.  The piece is signed on the bottom, “Thomas Tenorio”.  It is in excellent condition with no chips, cracks, restoration, or repair. 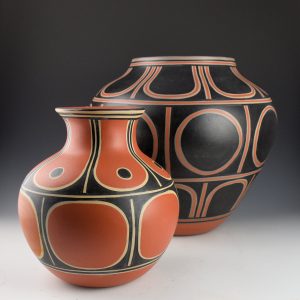 Thomas Tenorio is from the Aguilar family of Kewa Pueblo. His name in Keres is U-Nah-Thee-Wah. When he began making pottery he felt that the ancient traditional methods of pottery making was dying within his pueblo so he was inspired to try and resurrect the long lived legacy. Thomas taught himself to make traditional pottery by reading textbooks, conducting one on one interviews with other pottery makers and research. He has won awards at Santa Fe Indian Market for his large scale pottery.