Minnie Vigil is renowned for her polychrome pottery.  In the 1980’s she created a distinctive style of pottery using different clays to create colorful designs on her pottery.  However, in the 1970’s she was known for her black-on-black pottery. The jar has a feather design around the shoulder.  They are a stylized design with a rounded edge.  The jar was traditionally fired and it is in very good condition with no chips, cracks, restoration or repair.  It is signed on the bottom, “Minnie”.  She is a sister to potters Gloria Garcia (Goldenrod), Lois Guiterrez, and Thelma Talachy and an aunt to Jason Garcia.  Her mother was Petra Gutierrez and her grandmother was Pasqualita Gutierrez. 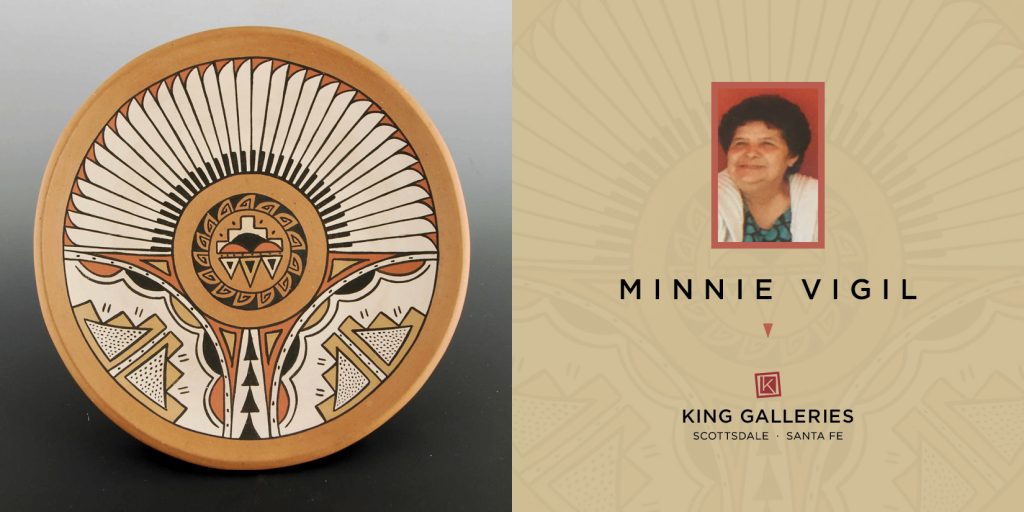 Minnie Vigil is a daughter of Petra Gutierrez and a sister to noted potters Gloria Garcia (GoldenRod), Thelma Talachy and Lois Gutierrez. Her son Tim “Sunbird” Vigil and daughter Annette Vigil also made pottery in the 1980s.  Minnie is known for her polychrome pottery and the use of numerous clay slips to create the colors. She has won numerous awards at events such as Santa Fe Indian Market but today makes few pieces of pottery.