This is an extraordinary piece by Nathan Youngblood.  It is one of his few boxes and this is one of the only ones with a double lid!  The box itself is round and fully carved with a water serpent. The avanyu (water serpent) encircles the entire piece.  The lid is fully carved and polished tan.  Tan is one of the most difficult colors to achieve in Pueblo pottery.  Why?  It is water instead of a clay slip that is used to polish the piece.  Polish too hard and it is streaky, and not hard enough and it is dull.  When a piece is traditionally fired it also takes in more smoke which changes the color.  Finally, the second “lid” is carved and slipped with mica.  The story on the piece reflects both the color and designs.

“The circular box is carved with an avanyu.  It encircles the entire piece and the body is made up of various water designs  The lid is fully carved and looking down on it, it represents the land around above and surrounding the waterways of the avanyu.  I used the tan to represent the color of the earth.  There is a single hole in the lid, which represents the connection between the land and the water below. I made a “lid” which sits in the hole and it is a carved to represent a tree. It is bringing the water up from below to grow.  This is the connection of water, land and life.”  Nathan Youngblood

All three pieces were traditionally fired. The box and “tree lid” are fired black.  It has a wonderful coloration which is “water like” in appearance.  The lid is tan, which is always difficult to polish and fire.  This piece has perfect firing and the result is a caramel coloration, which is always so rich and distinctive for the tan fired vessels.   The pieces are signed with Nathan’s name and his signature of three deer tracks.  They represent his name in Tewa, which means “Deer Path”. 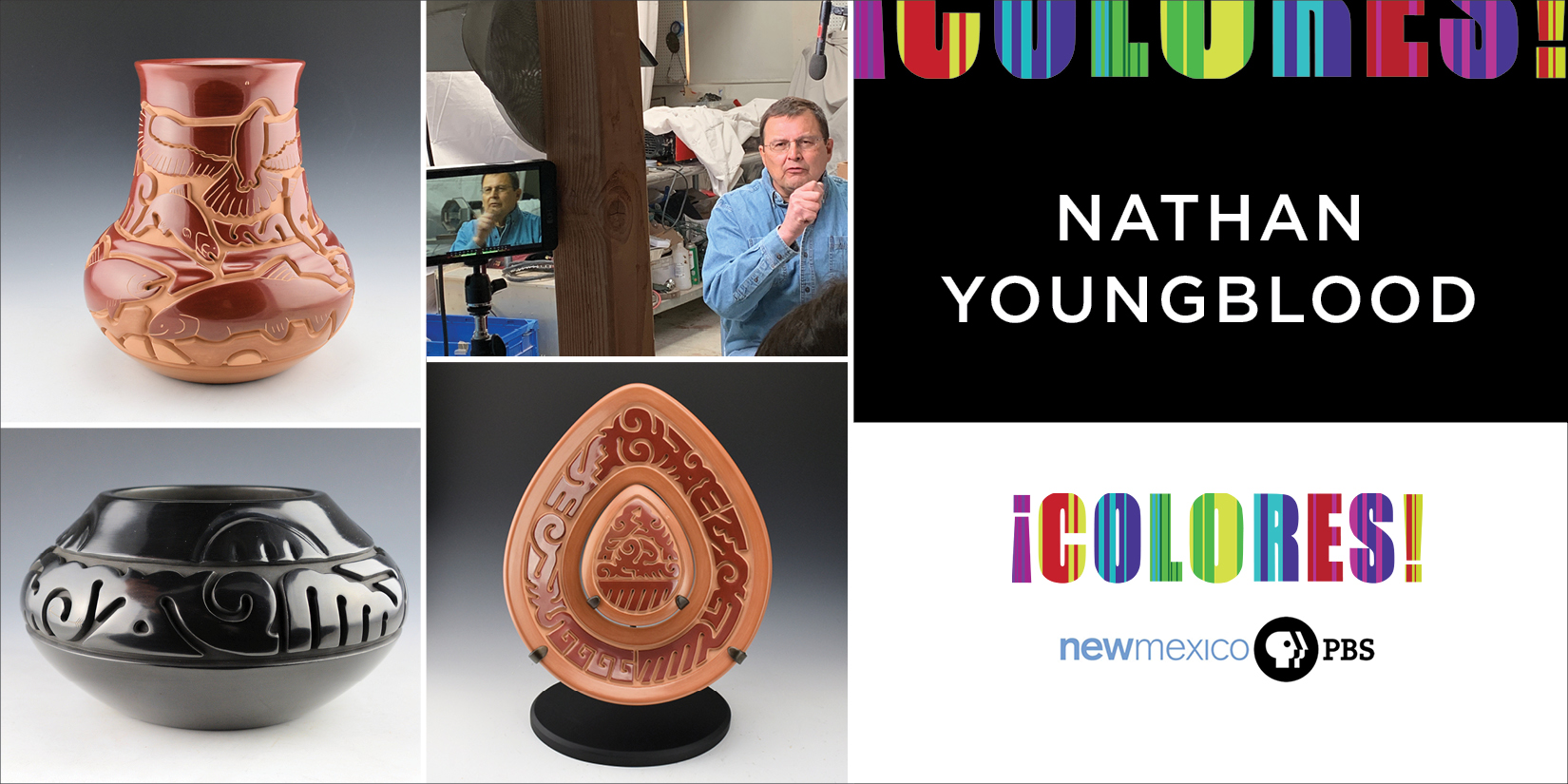 Nathan Youngblood is the grandson of noted potter Margaret Tafoya and the son of Mela Youngblood, Nathan has a traditional legacy of highly polished deep carved pottery.  In 1976 he moved in with his grandparents and began an intense apprenticeship making pottery under their guidance.  Attention to the small details was also imparted to him by his mother and grandmother. The precision of his work is particularly evident in his forms, which have near geometric perfection in shape and symmetry.  Nathan says, “I realize I don’t make pots, I’m just involved in the process. The clay does what it wants to do, goes where it wants to go.  I stick my hands in the clay, and where it goes, I follow.”

Nathan Youngblood's clay art has evolved dramatically throughout his career.  His early work focused on classic Santa Clara shapes and designs. In the early 1990s, Nathan re-examined his experiences with art from around the world and how it could be incorporated as part of his designs.  His love of Asian ceramics influenced how he designed his pottery and how he utilized matte and polished surfaces to emphasize form.  The designs seemed to be more complicated, less linear, and more ethereal in concept.  He “opened the door for other potters to use clay as a vehicle for their personal and cultural experiences.”

Over the years Nathan has won over 140 awards for his pottery. He is one of only a handful of Santa Clara potters who use natural clay slips to create color contrasts of red and tan in his pottery.  This combination of polished red and tan sections with matte or micaceous surfaces has become the new Santa Clara “polychrome.”  Throughout his career, he has continually built on the lessons learned from his mother and grandmother. This legacy has created a solid foundation for the evolution of his pottery, and “he has set the bar high for any potter to balance creativity, innovation, and technical expertise.