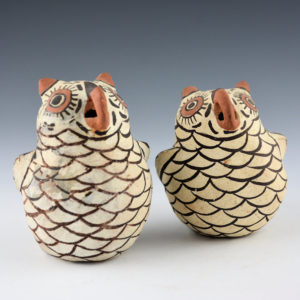 Nellie Bica is considered one of the most famous Zuni potters of the mid-20th century. She is noted for her pottery owl figurines. In 1917, Nellie learned to make pottery: "My mother's youngest sister taught me when I was in my teens. Owls were the first potteries I made. That's the way they taught them in those days. I always put babies on my owls. I think I was one of the first to make owls with legs. Now my daughter and three granddaughters make them, too."
After the passing of Tsayutisa and Catalina Zunie, Nellie Bica helped keep pottery making alive at Zuni. Quanita Kalestewa, her daughter, said that Nellie used to fire her pottery early in the morning, "just when the sun rises." Nellie taught her daughter to pray when gathering clay and making pottery.