His art in clay was an immediate success.  By 1972, just a year after he began his full-time pottery career, his works were selling fast and for significant prices.  Ray Manley was quoted at a show in 1972: “I was tenth in line when they let us into the show.  By the time I got there, two people were already writing checks – one for $2,800 and another for $3,000 – for Lonewolf’s pots.”.

By 1974, his clay work was selling so quickly that it inspired him to make his first bronze.  Not only was it to be his first bronze casting, but he may be considered one of the first Pueblo potters to begin casting their clay work in bronze.  It was not until 1978 that Tony Da made his first bronze, “Pueblo Amities”.   The first piece by Joseph was entitled, “Territorial Rights” and was cast in 1974.  The piece was an immediate success and sold out quickly.  It was followed up with an additional 5 different bronzes through 1980.  The edition size of the bronzes varied, although the series he cast in 1978 were each an edition of 16.  There were a few variations within some of the castings when he used silver and gold plating as part of the series.

While “Territorial Rights” was fully cast, many of the others did not have the full edition cast.  They remain unique pieces in part of the amazing story of this influential artist.  Below each of the various bronzes made by Joseph Lonewolf, along with the year, edition size and any additional commentary or information about the piece.

“Joseph decided to create a bronze plate because it was a type of work he had never tried before and he thought it would be interesting to try and do something in bronze.  The bronze is a 12-inch plate done in bas relief in a natural wildlife scene.  It depicts a male quail standing on a longhorn skull among a weed patch.  The male quail is singing out his song to proclaim his territorial rights.  Therefore the name of the bronze plate is “Territorial Rights”.  There will only be sixteen of these plates made and the mold will be destroyed.  The first six of the issue are already pre-sold sight unseen.  The original plate Joseph carved out of clay and the mold was taken from this”.

“Lonewolf” was created to be released in conjunction with the book, “The Pottery Jewels of Joseph Lonewolf” in 1975.  The wolf was cast in three different manners and included limited-edition versions of the book (either hard or leather-bound).  I’m not sure if any of the editions were fully cast.  While the gold version was advertised (see below) as 14K Gold, I believe it was actually gold plated.  The only one I have ever seen is one that I purchased from Theresa Lonewolf and I remember her saying it was gold-plated.

This piece was advertised to be cast in “brown patina, silicon bronze, sterling silver, and white bronze”.  I’m not sure if the intent was to have 60 of each or 60 total using the different materials.

I did find a profile sheet from the Lonewolf gallery which noted that all the editions were sold out with one White Bronze remaining.  It would make sense that there were 15 of each style, making for a total edition of 60 (note added 3/19/2020)

These series of three silver cast vessels were featured on the back of the book, “The Pottery Jewels of Joseph Lonewolf”.  I’m not sure if more than one of each was ever cast.  In 1998 I spoke with the owners of Dandick Publishing (who published the Pottery Jewels book) and they noted that they had the molds and could cast them.  However, they were not available at the time and I have never seen them in person. 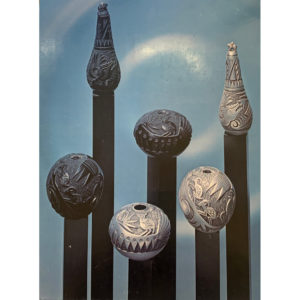 In 1978, Joseph created three pieces of jewelry.  They were taken from the casting of “Pronghorn”.

“Each jewelry design, created in a limited edition of 18 karat gold by means of the “lost-wax process” has a symbolic meaning.  The earring “Mimbres Bee” represents sweetness.  The pendants “Flute Player” and “Butterfly” denote leadership and beauty, respectively.  The elaborate detail and meticulous artistry of the jewelry emphasize the exceptional quality for which Joseph Lonewolf is renowned”.

The three pieces of jewelry were cast from the butterfly, bees, and flute player on the “Pronghorn” bronze (above left).  The three pieces were advertised together and are shown above (right).  I have only seen two of the butterfly pendants, but not either the Bee earrings or Flute Player pendant in person.

18K Gold “Butterfly” Pendant by Joseph Lonewolf, front and back.

The 1976 Indian Pueblo Cultural Center coin/medallion in a presentation box.

There is an accompanying card to the coin which describes the designs on both sides as follows:

“This commemorative coin captures both the spirit and essence of Indian Pueblo life.  Co-designed by famed pueblo artists, brother and sister, Joseph Lonewolf and Grace Medicine Flower, the specially commissioned coin symbolizes the wimple and virtuous community underpinnings for which these people are widely known.

The commemorative side, reading “Indian Pueblo Cultural Center – 1976” and designated by Grace as “A Stairway to Progress”, attests to the magnificence of Pueblo arts and crafts.  Joseph Lonewolf’s interpretation on the obverse side comprehends the universe itself in metaphoric storytelling.  At the center of the universe depicted by the outside circle and having no beginning and or end, is a fledgling eagle – a symbol of Indian Youth – and the earth where the youth is born.  Paralleling the eagle’s head is the serpent of the Rio Grande.  The arrow-shaped “Breath of Life” emitting from the serpent’s mouth infuses the sphere with energy and represents life everlasting.  Radiating from the fledgling are feathers depicting the traditional pueblo ways of life.  The fledgling eagle clutches several feathers, to which he will cling forever as his grip is strong.  Feathers emanating from the earth are the Pueblo paths of life – one of which the eagle must choose.  The feather in the coin’s lower portion suggests graduation in rank, or promotion in the Indian vernacular.  The scene is further energized by a dual bolt of lightning which, although not entirely translatable into English, alludes to the individual’s self-respect and dignity.  If the electrical force of the bolt is should ever dissipate, the eagle would lose his cherished traditions.  But if it remains intact in his universe, as a part of the nucleus of life, the eagle will not suffer the loss of his sacred Indian heritage.”

I believe this is the first comprehensive review of the bronzes and jewelry of Joseph Lonewolf.  Any additional photos or information that can be added are welcome.  Please contact me at kgs@kinggalleries.com.