Understanding the signed pottery of SaraFina Tafoya from 1933 to 1949

Sara Fina Tafoya (1863-1949) is among the most renown of the early Santa Clara potters. She was the matriarch of a dynasty of potters, included among her children were Camilio Tafoya, Margaret Tafoya, and Christina Naranjo. Beginning in 1924 Sara Fina was one of the first pueblo potters to begin “carving” into the clay to create designs in her pottery. She was masterful with her forms, where the simplicity of the shape, especially with her larger vessels such as the storage jars, did not require additional design. Part of her genius was adding elaborate shapes for the handles and unusual indentions such as the “raindrop” rims. These created special features readily identified her pottery.  It is certainly a testament to her skill is that few Pueblo potters today are able to create either pottery of such size or with such complicated additions such as her handles.

Sara Fina did not sign her early pottery.  She spoke Tewa and Spanish (not English) and was not known to be able to write.  The purpose here is not to focus on pottery attributed to her, but to focus on the much rarer signed pieces.  Signing pottery began around 1921 at San Ildefonso.  It took off quickly there and spread to Santa Clara in the late 1920s.  Because SaraFina could not write, it was certainly someone else who was signing her pottery.  Most likely, it was her son Manuel, who also often helped her with the painted designs on her pottery.   By 1933, the scale and size had downsized from the massive pots of her early years.  However, at 70 years old, that she was still making pottery is certainly a testament to her tenacity and skill.

In the 1930s, the pottery was most likely still all made by SaraFina.  The shapes are reminiscent of her earlier pottery, but just on a smaller scale. The designs may have painted by her son, Manuel.  However, they may also have been sketched out by SaraFina herself.  There is a marked difference in design and style between those pieces attributed to Manuel and those attributed to SaraFina.  Grace Medicine Flower also noted that her father, Camilio Tafoya, also said that he painted some of the designs on SaraFina’s pieces.  As with much of the pottery from the 1920s to 1960s, it was certainly a collaborative affair. 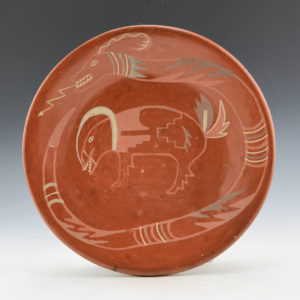 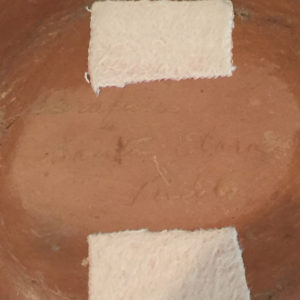 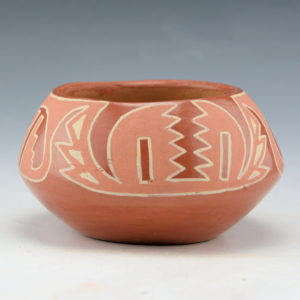 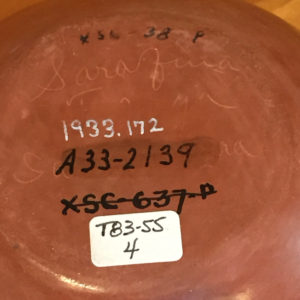 Style in Form and Design

The size and designs of signed SaraFina pottery are unique. They are modernistic, fanciful and much more creative than much of the other painted Santa Clara pottery of the time.  There are pueblo designs and naturalistic imagery that is now rarely seen.  The variance of colors is also exceptional 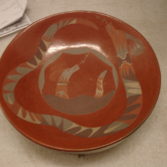 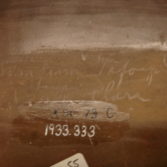 In order to have a better sense of when the signed pieces were being made, it is best to start museum collection and pieces with firm acquisition dates.  The Denver Art Museum has a signed polychrome plate by SaraFina from 1933 (collection number 1933.333).  It is signed “Serafina Tafoya”.  There are none at MIAC, NMAI or the Heard Museum.  The Museum of Northern Arizona has several smaller signed pieces in their collection.  In the evolution of her signed work, the polychrome pieces were made in the 1930’s and the carved pieces later.

The era of signed SaraFina pottery probably lasts for about ten or fifteen years at the most.  In that time period, it is very difficult to estimate the number of pieces which were made.  What is easy to estimate is their scarcity today.  They are typically smaller in size, which is probably a reflection of the economic times of the Great Depression, World War II and SaraFina’s advancing age.  The unusual polychrome designs are often not considered “traditional” Santa Clara patterns and so were not easy to identify by collectors. The black pieces were unusual shapes, again, not the more classic forms.  All these factors create a series of unfortunate occurrences in which the pieces have not survived well over time.  The scarcity of them in museums is a further reflection of how few were collected at the time they were being made. While several hundred were certainly made over the years, today it would be difficult to put together a compendium of at least 100 of these pieces.  While there always seems to be more ‘attributed’ pieces to SaraFina, these are certainly the only definitive signed works and reflect an

“The literature which mentions Sara Fina usually spells the name Serafina or Sarafina.  Several pieces of her later work have been found which have been signed a plurality of ways including Serafina, Sara, Sera and Sarafina.  Margaret is adamant about the correctness of the double name…claiming Sara was the name given by the godmother and Fina by the godfather.” (Margaret Tafoya” by Mary Ellen and Lawrence Blair, 1986).  The signatures certainly vary over time but the script remains nearly the same for all the painted and plainware vessels.  They are typically signed into the clay over a slip of matte clay.  This is also consistent in style with the signed pieces by Margaret Tafoya of the same time period.

This is probably the earliest of the signed signatures.  There is a swipe of clay over the polished surface and then the signature is signed into the clay.  The “T” in Tafoya is, block lettering, not cursive. 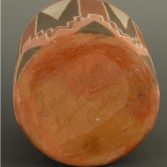 This is the most common signature.  It is found on red polychrome vessels (i.e. with painted designs) and also on black vessels.  The black pieces are typically unpainted but have unusual forms.The “T” in Tafoya is, block lettering, not cursive. 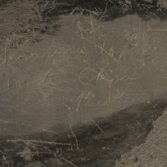 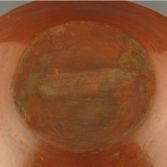 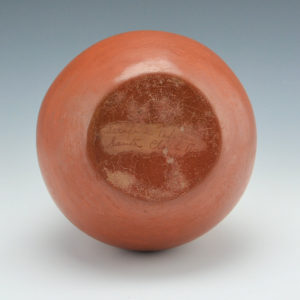 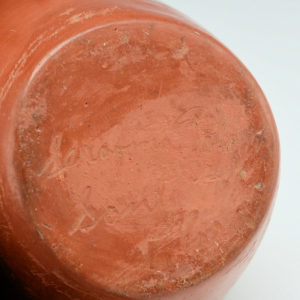 This is a variation of the “Serafina” signature without the “Tafoya” last name.  It is on a black-on-black plate.  The signature has the typical matte background slip with the name signed into the clay.

This signature includes polychrome and blackware pottery.  There is a cursive “T” for “Tafoya”. This signature is found on carved and plainware bowls.  There is a cursive “T” for Tafoya. This signature is probably the latest period of her signed work.  It is found primarily on carved pottery.  This signature does not include her last name. Copyright King Galleries and Charles S. King. No reproduction is allowed without the written consent of the author.

What’s Next? A Call for More Pictures of Signed SaraFina Pottery!

This is the first attempt to understand the style and signatures of SaraFina Tafoya.  After 20 years I have only managed to find about 20 signed pieces from which to extrapolate any information.  I would be glad to add more signatures and styles of vessels to the information above if anyone wants to send along photos of work in their collection. The more information that is available, the better we can understand this fascinating period of work by one of the great Santa Clara potters.

Photos of pottery and signatures can be emailed to me at the gallery.  kgs@Kinggalleries.com