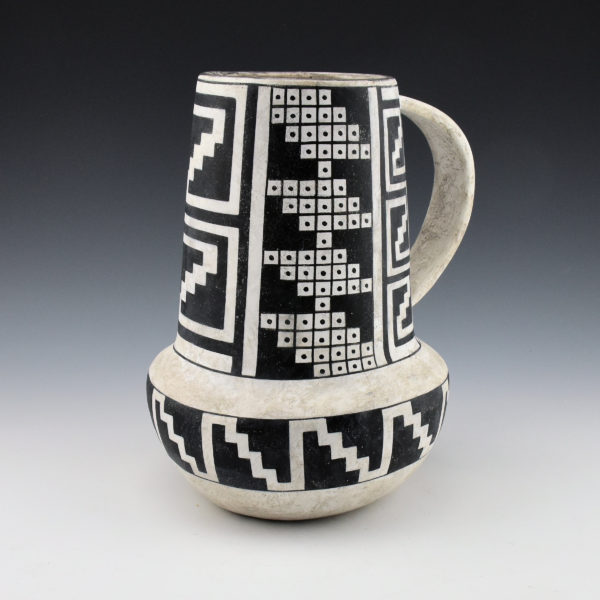 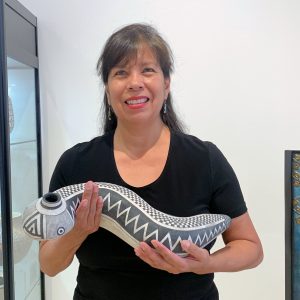 Lorraine Gala Lewis is Laguna, Taos, and Hopi. She attended IAIA (Institute of American Indian Art) and studied under Ralph Pardington, Otellie Loloma (Hopi), and Manuelita Lovato (Santo Domingo). In 1987 she began working with Nathan Begaye. He mentored her in the traditional style of pottery and figurative forms. She became friends with western artist Bill Freeman who inspired her to learn about pre-contact pottery forms. Lorraine says, “I delved into this and began collecting materials, visiting museums, and viewing private collections, focusing on works dating from 850-1200 AD. Studying these early art forms led to rediscovering our ancestral lands; these visits enhanced my creativity. The stories of our early paintings, petroglyphs and rock carvings made me pay closer attention to detail. The work is a true reflection of self: what was felt by that individual at that time in the environment. There was a continuous cycle of creating. Our earliest potters captured expression in distinctive shape and form. The evolution of work was a reflection of the archaeological changes in lifestyle during periodic phases. This is detailed in the usage of composition and design. Techniques became more refined and increasingly sophisticated which really captured my attention.  I share these re-creations with respect in hope of preserving a pottery culture that existed hundreds of years ago. Through conservation, there is a need to educate and teach others on the care and appreciation of our natural and cultural resources. With these replications, I try to capture the aesthetic beauty and individuality of each piece.” 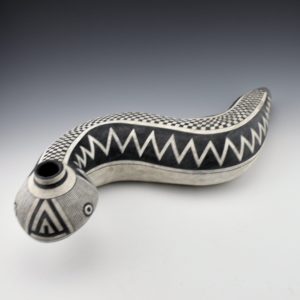 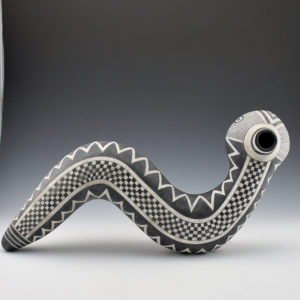