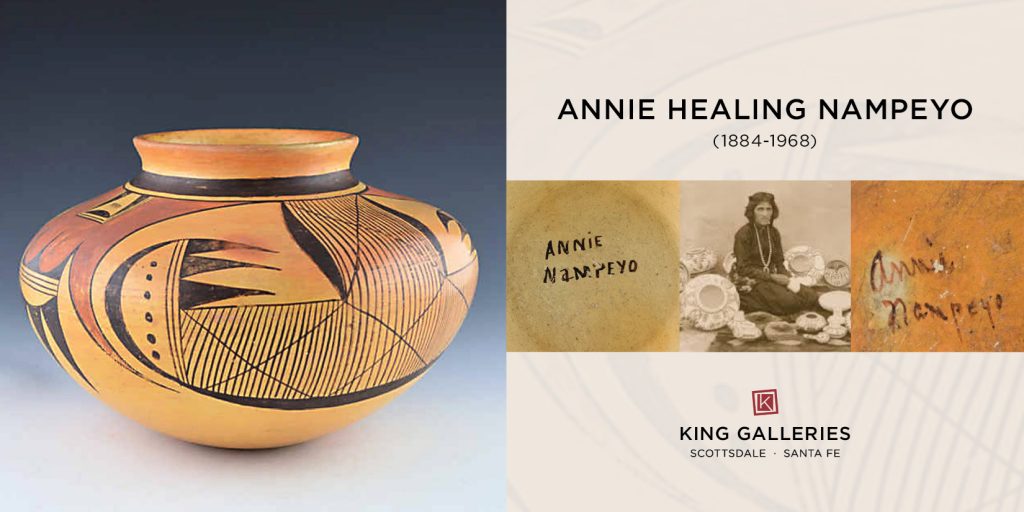 Annie Healing Nampeyo (1884-1968) was Nampeyo's first child. She was the mother of Rachel Nampeyo, Daisy Hooee, Fletcher Healing and Beatrice Nampeyo. Her name in Tewa was “Quinchawa”. As a child, she was sent to the boarding school at Keam’s Canyon. After returning home after her first year at boarding school, her new name was “Annie”. Annie was married around the age of 16 to Willie Healing. His Hopi name was Ipwantiwa, but his name was changed at school to Willie. His last name was the English corruption of his mother's name Heli. Annie potted with Nampeyo for many years and much of her work is indistinguishable from her mother's. According to Nampeyo biographer Barbara Kramer, Annie was Nampeyo's silent but visible partner in pottery making. However careful study has been able to differentiate several design styles between Annie and her mother. She preferred to paint black and white on red. Also, her work was more delicate than her mother's. The first piece directly attributed to Annie was in 1912 by artist and anthropologist William Leigh. Annie continued to make pottery until the 1930s when she could no longer make pieces do to her arthritis.