Kevin Trancosa was from San Felipe Pueblo. He had a very short career making pottery from 1990-97. Each piece was coil built and made using clay from San Felipe Pueblo. He began with red micaceous clay and then started to work with a white micaceous clay. His exceptional designs and forms were exceptional. He won numerous awards during his lifetime and his work can be found in museums nationwide. His peak in making pottery was from 1996-8 and there remain few of his important pieces which still come back to the market. 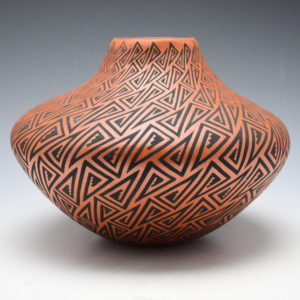