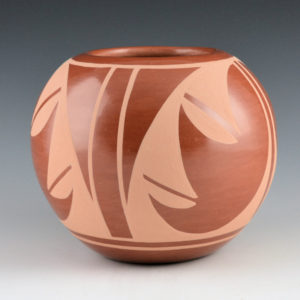 Albert & Josephine Vigil worked together on their pottery. They began making pottery in 1945. Josephine made the pottery and Albert painted the designs. Albert Vigil (1927-2009) was a nephew of Maria Martinez. He was also the son of noted San Ildefonso painter Romando Vigil, one of the members of the San Ildefonso School of watercolor artists and also know for his work with Walt Disney Studios. Josephine Cordova Vigil (1927-2001) was from Taos Pueblo and she moved to San Ildefonso when she married Albert. Josephine learned pottery making by watching her aunts-in-law Maria Martinez, and Maria's sister Clara Montoya, who are considered San Ildefonso Pottery Matriarchs. Maria Martinez taught Josephine how to coil-shape the clay and Clara Montoya taught her how to polish the pottery before it was designed or painted.  They began making pottery in 1945.  Josephine and Albert used the traditional methods of hand-coil, polishing, and traditionally open fired pottery.