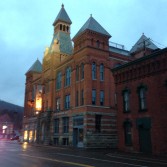 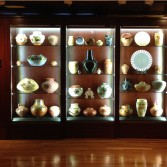 The Rockwell Museum in Corning, NY seems a bit of an out of the way place to find some amazing Pueblo and Tribal pottery.  However, their new exhibition, “On Fire!“, which features primarily pieces from the Cameros Collection, has some breathtaking pieces.  The original installation and collection was documented in the book, “Crafted to Perfection”.  I still HIGHLY recommend this book, as there are some good photos and lots of good biographies.  However, the pieces in the collection have expanded since then and the Rockwell has also taken an initiative to add to their permanent collection.

So, after having a couple of  opportunities to lecture on Pueblo pottery and this collection, I thought it might be interesting to point out “5 Reasons to Visit the On Fire! Exhibition”.  There are certainly more than 5 pieces of interest in this exhibit of nearly 100 pieces of pottery.  It was hard to select just five and it certainly leaves out some major works. Hopefully these are enticing enough!   As well, you can click here and see all the pieces in the exhibit! 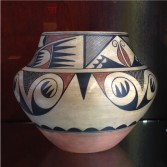 After all these years you would think that “another Maria” jar would be boring.  Wrong!  This polychrome jar by Maria and Julian from the 1920’s is one of the most exciting I have seen in years.  The imagery around the neck has the butterfly and bear paw designs along with incredibly intricate fineline patterns.  This is simply Julian’s painting at its most refined.  Around the shoulder are Hopi inspired bird wing patterns.  Julian (and other early San Ildefonso potters) was fascinated by Nampeyo and Hopi designs, and it is certainly evident here!  The shape is a classic water jar by Maria, with the round shoulder and sloping neck used to create the perfect “canvas” for the painted designs.  There is a vibrancy and energy about this jar that keeps it relevant nearly a century later. 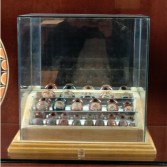 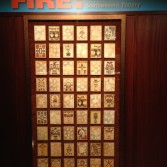 It is not often that we see Pueblo artists who make a group of pieces that are intended to be presented as whole.  First is a group of 15 pieces by Joseph Lonewolf form 1973 and it is a series of miniatures. He intended to have them displayed as a group and the capture the variations in size, color and designs of  his early “Pottery Jewels”.  The second group is one by Jacob Koopee.  It is a series of 54 tiles! They are displayed so that that they alternate between traditional imagery and tiles  with miniature “hand prints” on them.  It is a stunning installation!  It is fascinating to look at both of these from the artist perspective, as they were looking to create a larger artistic vision from their work, beyond the size of a single vessel.  Interestingly, this is the only set  of miniatures by Joseph Lonewolf in a museum collection (he only made 5 sets), and the same is true of the group of tiles by Jacob Koopee! 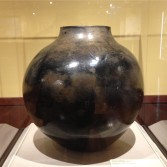 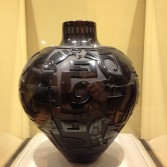 Few potters have been able to work in such a large scale to create coil built storage jars.  Both of these pieces are over 17″h!  This exhibit has two major pieces, each nearly a century apart and both reflective of the time and the potter.  The large black storage jar by Sara Fina Tafoya has stunning surface, with variations in color from black to brown. The firing techniques of a piece from the early 1900’s was part of what created this coloration. There are also bear paws impressed into the clay around the shoulder.   Tammy Garcia created an equally timely interpretation of her storage jar  in the early 2000’s.  Here the jar is elaborately carved with Koshari figures and a water serpent.  The complexity of design is as engaging as the form.  Seeing these two massive vessels from four generations apart, is definitely exciting! 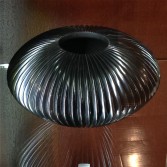 It’s not the largest piece in the exhibit, or the most complex.  However, there is always something visually stunning about the 64 rib melon bowls that Nancy is able to create.  This piece has straight ribs which are perfectly carved and polished. There is a fluidity in the form and a visual excitement from how the light hits the piece, that makes one stop.  It may seem old fashioned to say it, but it is amazing that this is made by hand! 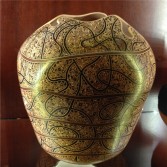 Les created a series of these intricate “mosaic” vessels which were intricately painted with fluid lines and tiny designs.  Inspired by both Rondina Huma and Dextra Quotskuyva’s “shard vessels”, these pieces create their own inspirational path.  This piece has an opening which is as organic as the lines flowing around the surface of the piece.  Les said that he is no longer making these pieces and the last one he did in the series he entitled, “I’m done”.  Just one more reason to see one of these pieces in person!