For collectors of Inuit prints the high point of each year is the release of the Cape Dorset Annual Print Collection.  The prints are produced in editions of fifty each, though on rare occasions one or two prints are done in a run of one hundred.  Cape Dorset has consistently been able to attract and maintain a large group of international collectors and anticipation is always high when each year’s collection is released in October.  The quality of Cape Dorset prints is always artistically exceptional because of the willingness of the artists and printers to embrace creative and technical innovation and experimentation.  The 2018 collection contains thirty-four works in a variety of print media – stonecut, stonecut & stencil, lithography, etching and aquatint, etching, acquaint and hand painting, and etching and Chine-collé.  The 2018 collection contains a diverse range of imagery: animals (owls, caribou, walruses, bears, a raven, a fox and a caterpillar), barnacles, kelp, a telephone pole with wires as well as works that are surreal or whimsical and one showing the transformation of a boy into a seal.

Deciding which works to acquire is always a challenge.  From one year to the next I never know what will attract me.  It might be a scene from Inuit life, a surreal work, or one that is whimsical.  If asked whether I like images of animals my first impulse would be to say that I don’t.  However, that would not be true.  Although I avoid overly sentimental representations of animals, various and sundry creatures are represented in my collection.  It’s a matter of a particular work having a unique charm.

Whether or not I buy a piece greatly depends on my immediate intuitive response to it; analysis comes later.  I can say in all honesty that I never know what will attract my attention.  Lately, I am mostly drawn to abstract works rather than those that are representational.  However, I sometimes surprise myself by choosing works that exemplify common themes and practices.  That was the case with the 2018 Annual Cape Dorset Print Collection.  However, the overriding factor is that the pieces selected must be artistically significant.  As with most collectors, money is always a consideration and I am only able to acquire a few prints from each year’s collection.  After repeatedly looking at the 2018 offerings, the first elimination narrowed my choices to four prints (ironically all images of animals): Lively Caribou by Axangayuk Shaa and Defiant Caribou, Rearing Caribou, and Mighty Bear all by Quvianaqtuk Pudlat.  Each of these works epitomizes the Cape Dorset printmaking practice of isolating one iconic image of Arctic wildlife on the page. 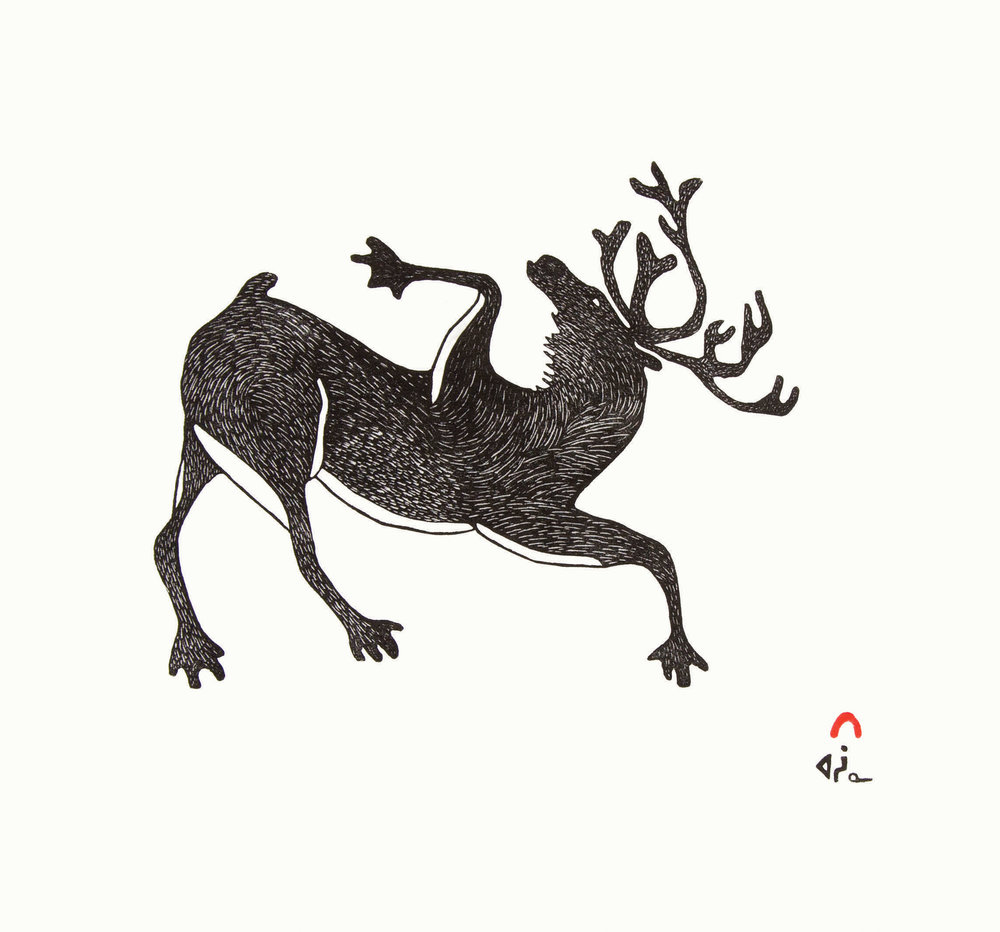 Reminiscent of the work of Kananginak Pootoogook, Lively Caribou immediately attracted my attention.  It is a strong image done in black with a hint of white on a pure white page.  What initially drew me to this work, the resemblance to prints by Kananginak, in the end led me to reject the piece.  However, it is the unusual position of the animal’s front leg that was the deciding factor.   It just did not appeal to me. Defiant Caribou is another strong print.  Presented predominantly in black, the image is printed on a light blue page, which also highlights the animal’s antlers and hooves and the lines created on its body to suggest fur.  I was originally attracted to Defiant Caribou, but I found the creature’s face disturbing since it appeared skeletal.  Although I am often drawn to dark subjects, after a great deal of consideration, I decided against acquiring this print. 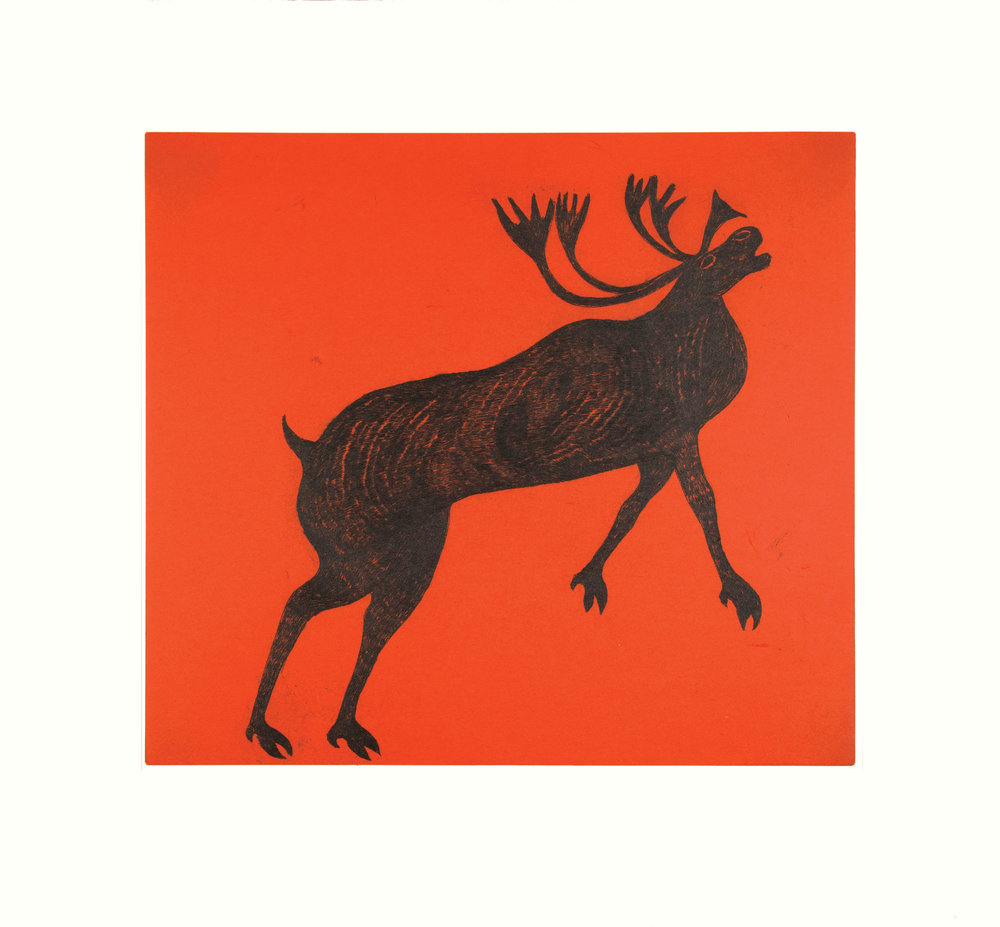 Because of the predominance of red, Rearing Caribou is visually powerful.  The animal is drawn against the color in black, creating a stark contrast.  However, for my taste, the red overpowers the work and I decided against it. Ultimately, of the four prints being considered, I chose Mighty Bear by Quvianaqtuk Pudlat.  As I repeatedly looked at images of the thirty-four works offered in the 2018 collection this is the one that I could not get out of my mind, which is always an indication that such a work is the one that should be acquired.  As is often the case with Inuit prints, the image of the animal dominates the page.         Whether or not, the artist created an accurate or fanciful representation of a bear is open to interpretation.  I have seen other works that have portrayed yellowish polar bears.  This color is caused by environmental pollution, causing the animal’s fur to become discolored.  On the other hand, the bear may simply be pure fantasy on the part of the artist.  Over the years, a number of other Cape Dorset artists have created prints in which the color of the animals they portrayed had no relationship to reality.

The 2018 Cape Dorset Print Collection contains many works that are brilliantly executed as well as visually strong.  This is usually the case with Cape Dorset prints.  Such excellence is a joy but, except for the very few for whom money is no object, it makes it difficult for collectors to winnow down so many fine works to a final few choices.  I always find the process difficult, frustrating, exhilarating and extremely satisfying.

All collections are idiosyncratic; no two are alike.  Each reflects the tastes, personality, interests, and artistic biases of the collector.  Some collect in a consistent vein acquiring art by favorite artists, pieces that typify an artist’s output or works on specific themes.  My process is more complicated, especially with regard to prints.  Since I have an overview of the history of the Cape Dorset Print Collection, I often acquire works that are atypical because I feel they are artistically significant.  Choosing from among so many fine prints in the 2018 Cape Dorset Print Collection was difficult.  Lively Caribou, Defiant Caribou,  and Rearing Caribou are all incredible creations and it was hard to eliminate them.  However, after a great deal of careful deliberation, I feel that Mighty Bear is the best fit for my collection.

To see all of the prints in the 2018 Annual Cape Dorset Print Collection, go to the link below and scroll down.