When most people think of Native American art I doubt petroglyphs or other forms of rock art come to mind.  However, these ancient markings are important to understanding much of the Native art that followed, including that produced in the contemporary era.  Rock art is mysterious, mystical and mesmerizing.  What makes it so fascinating is that there are no definitive answers with regard as to what they mean.  For this very reason, some people are put off by this ancient art form.  They just don’t know what to make of it.  One of the best places to learn about rock art, particularly petroglyphs, is the Deer Valley Rock Art Center, located just fifteen miles north of downtown Phoenix.

Although there are rock art sites scattered across the United States, especially in the Southwest, what makes Deer Park Rock Art Center unique is how the subject is approached.  For those willing to take a little time and make a bit of an effort, Deer Valley Rock Art Center is the perfect primer for rock art, giving explanations, particularly for petroglyphs, by means of wall texts and photographs before the visitor ventures out onto the desert to view the real thing.

The main section of the Deer Valley Rock Art Center building presents “Leaving Marks: The Rock Art and Archaeology of Deer Valley,” a permanent/ongoing exhibit.  Wall texts give important information on the Hedgpeth Petroglyph site, just outside, and on the various types of rock art: Petroglyphs are created by cutting into a rock surface using a rock tool with images pecked, scratched or rubbed into the rock; pictographs are produced by painting images and designs onto a rock surface using paints made with natural mineral pigments; geoglyphs, also known as intaglios, are formed by moving stones or earth to form an image (usually referred to as an effigy) or design; cupules, perhaps the most enigmatic rock art, are concave depressions that are pecked into a rock surface and are considered a type of petroglyph. 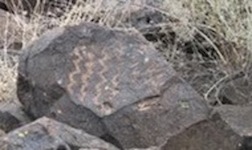 Thousands of years ago, people came to what is now called Deer Valley because of Skunk Creek, which once flowed for a good part of the year.  This water source and the plant life it supported attracted animals which, in turn, drew humans to the area.  Archaic People were the first to arrive some 7,000 years ago.  Nomadic hunters and gatherers, they lived on game and wild plants.  Although they made baskets, they did not produce pottery.  Petroglyphs made by the Archaic People consist of circles, circle clusters, concentric rings, grids, zigzags, parallel wavy lines and ladder and rake shapes. 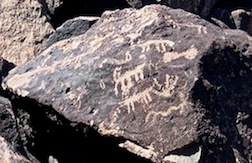 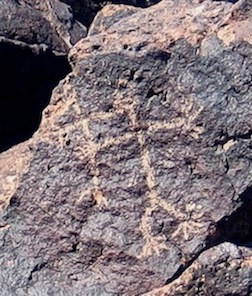 The Hohokam (100 BC – 1300 AD), who arrived in the area next, were one of the major ancient cultures of the Southwest.  Whether this group grew out of the earlier Archaic People or migrated from another area, perhaps Mexico, is hotly debated.  The Hohokam made sophisticated jewelry, striking pottery, built platform mounds, had extensive trade routes, and farmed extensively using a complex system of irrigation canals.  They cultivated corn, squash, a variety of beans and also utilized wild plants as well as game and fish.  The Hohokam mostly inhabited an area that is present-day Metropolitan Phoenix though there were some settlements well beyond the Valley of the Sun.  Petroglyphs  attributed to the Hohokam tend to be less geometric and more representational, though abstracted.

There is also evidence of the Patayan culture (AD 500 – 1550) at the the Hedgpeth Hills site.  This group inhabited parts of Arizona, California, Baja California and from prehistoric Lake Cahuilla, predecessor of the smaller, modern-day Salton Sea, to the Grand Canyon.  The Patayan were highly mobile and, although they took advantage of wild game and seasonal plants, they also did some farming.

The Hedgpeth Hills Petroglyph Site has 1,571 documented carvings pecked into 579 black basalt boulders.  For some people it is a disappointment that, although there is a large number of petroglyphs, the majority of them are not visible to visitors.  However, the Deer Valley Rock Art Center and the petroglyphs it preserves can best be understood as an introductory course on how to find, look at, and appreciate Native American rock art.

The boulders at the Hedgpeth Hills site face east.  It is known that rock art sites as well as the placement of individual markings were chosen carefully so the location of the site has significance.  It is believed that in attempting to interpret specific petroglyphs their relationship to others that are nearby must be considered.  Although petroglyphs cannot be deciphered like hieroglyphics, it is clear that they do convey meaning, expressing ideas such as religious beliefs, messages, nearby resources, and astronomical data.  Some may have served as a warning of local dangers or to indicate territorial boundaries.

Rock art sites, including Hedgpeth Hills, were used over thousands of years with successive generations of artists adding their work to “the gallery,” thus complicating our understanding of this art.  The Archaic People were in the Hedgpeth Hills area some 2,000 to 7,000 years ago while it is believed that the Hohokam and the Patayan arrived sometime between 600 to 2,000 years ago.

Before venturing out onto the desert to see the petroglyphs, visitors, especially those with children, should stop into The Green Room, another permanent/ongoing exhibit.  Here families can discover information on the people, plants and animals that inhabited the area for thousands of years as well as learn facts about cultural traditions.

The petroglyphs are accessed via a quarter mile path that has eleven numbered markers that correspond to a free guide.  Along the way, visitors can consider what life was like for the people who once lived here since there are desert plants to be viewed and, with luck, creatures such as quail, squirrels, rabbits, coyotes, foxes and a variety of birds and lizards.

The Deer Valley Logo and the petroglyph that inspired it.

Locating petroglyphs is a skill that takes time, patience, concentration and, of course, good eyesight.  Many of the carvings are close to the trail but others can be seen through strategically aimed “viewing tubes”.

The major concentration of petroglyphs begins at marker #6.  Among the images in this area is one portraying two antelope bucks apparently at a standoff.  This petroglyph became the design for the Deer Valley Rock Art Center logo.      At marker #8 the viewing tube focuses one’s eye on three designs that are in close proximity to each other – a sideways big horned sheep, an image resembling a key and concentric circles – all dated to different time periods.  Tests indicate that the sheep was created between AD 1,000 and 1225, the “key” 1,000 to 3,000 BC, and the circles AD 650 to 900. 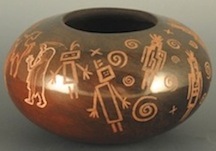 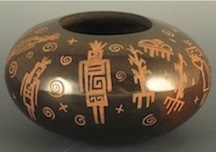 Some may wonder about the relevance of rock art to the modern visitor, asking why they should care about this ancient art form.  The Hedgpeth Petroglyph Site is considered a sacred place by the Akimel O’odham and the Tohono O’odham, who are most likely descendants of the Hohokam, as well as by the Yavapai,, Hualapai, Havasupai, Maricopa, Quechan, and Mohave, whose ancestors were the Patayan.  Furthermore, petroglyphs have influenced Native American art from ledger drawings in the 19th and early 20th centuries to contemporary ceramic art.  Although we many never know the complete significance of every rock art image, some contemporary tribal members have suggested interpretations based on cultural traditions.  Native American rock art is part of our national heritage and, as such, it should be protected, preserved, studied and appreciated.  The Deer Valley Rock Art Center is a leader in these areas.

All photographs of petroglyphs by Jeff VanDyke.

For more information on rock art see the following: