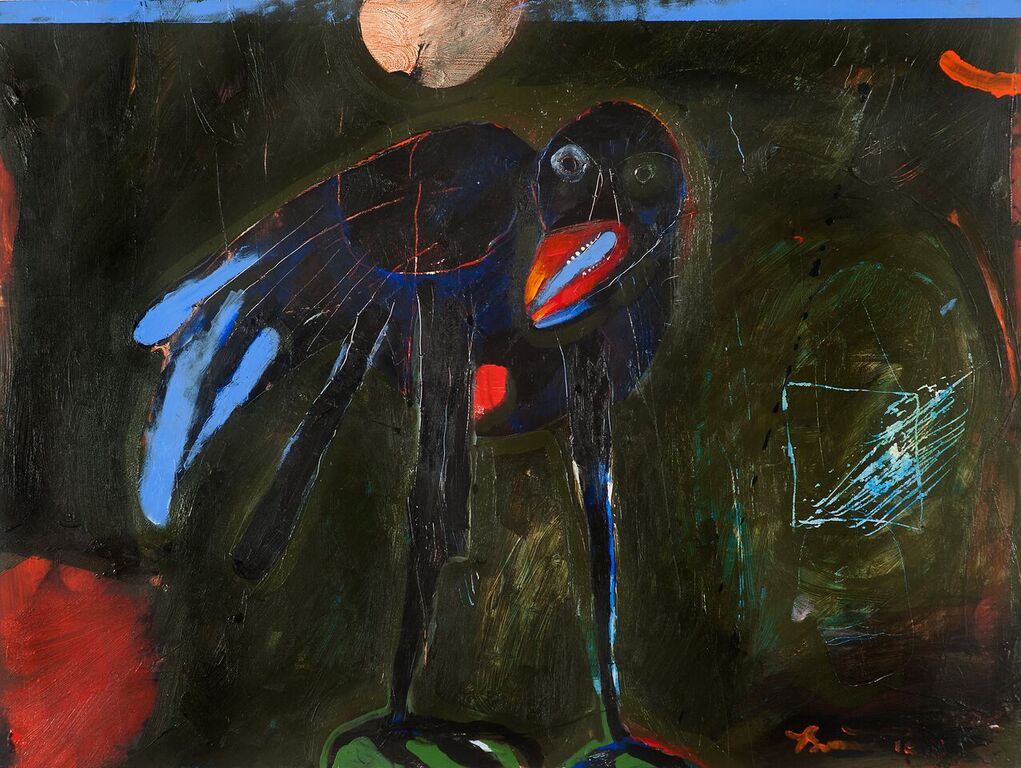 When the work of contemporary Native artists is presented it is usually exhibited with historic Native works rather than with the art of other contemporary American artists.  There are changes afoot in the museum world but all too often the work of contemporary Native artists is either excluded or exhibited separately from the established American art cannon, thereby casting Native artists as “other.”  Doing so assumes that Native Americans have no connection to modern American culture, which couldn’t be further from the truth.  Over the years, I have discussed with a number of Native American artists the fact that they are caught on the proverbial horns of a dilemma: If they reference their culture in their work it is dismissed as “ethnic art” and if they don’t, their art is denigrated as inauthentic. 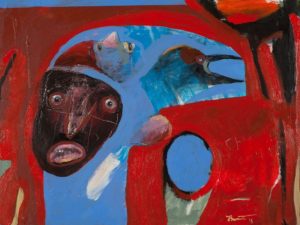 Not long after it opened, I visited the new Whitney Museum of American Art  in Manhattan and was astounded that the work of only one contemporary Native  American artist, Jimmy Durham, was represented.  Complicating matters is the fact that whether or not Mr. Durham actually is Cherokee is highly contested.  I kept thinking to myself: Where is Rick Bartow, Emmi Whitehorse, Sonya Kelliher-Combs, Jaune Quick-to-See Smith, Shan Goshorn, and Sarah Sense, Edgar Heap of Birds, and so many others I could name? Many voices make up the United States but only a few are being widely heard. 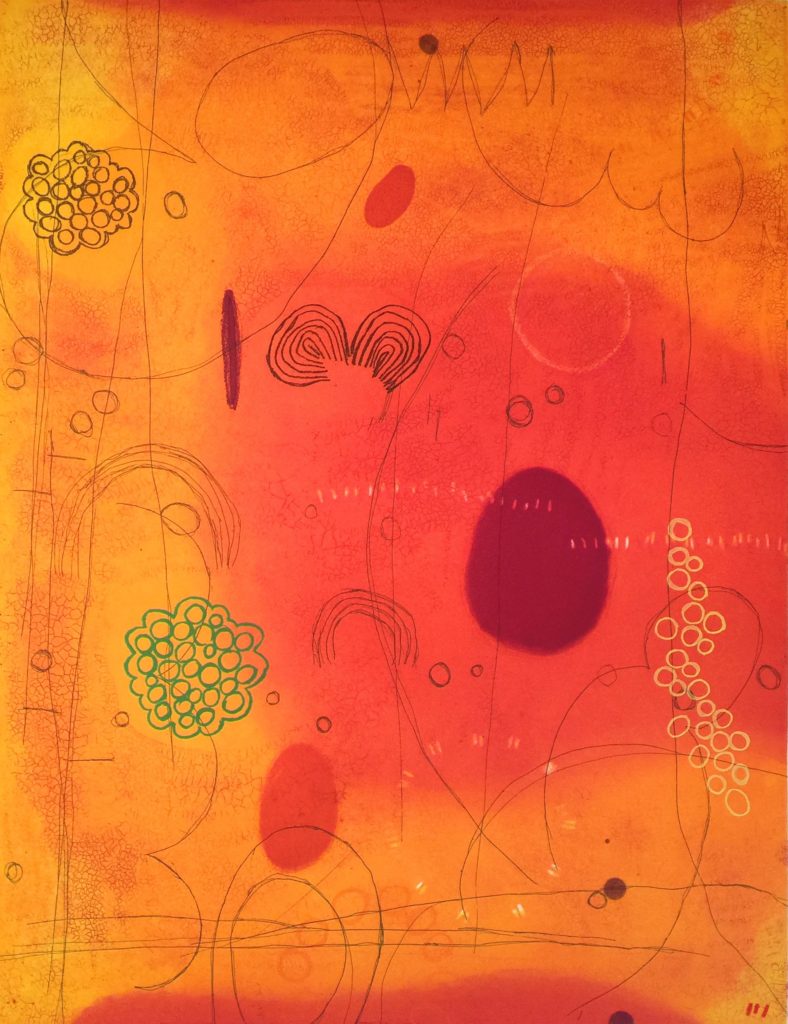 I often wonder what the goal is when museums present a survey of American art.  I have always assumed that it was to showcase great works by artists of varying backgrounds, reflecting the many cultural groups that make up our country.  Why then are Native American artists so often excluded from the conversation?  I’ve yet to receive a reasonable answer. 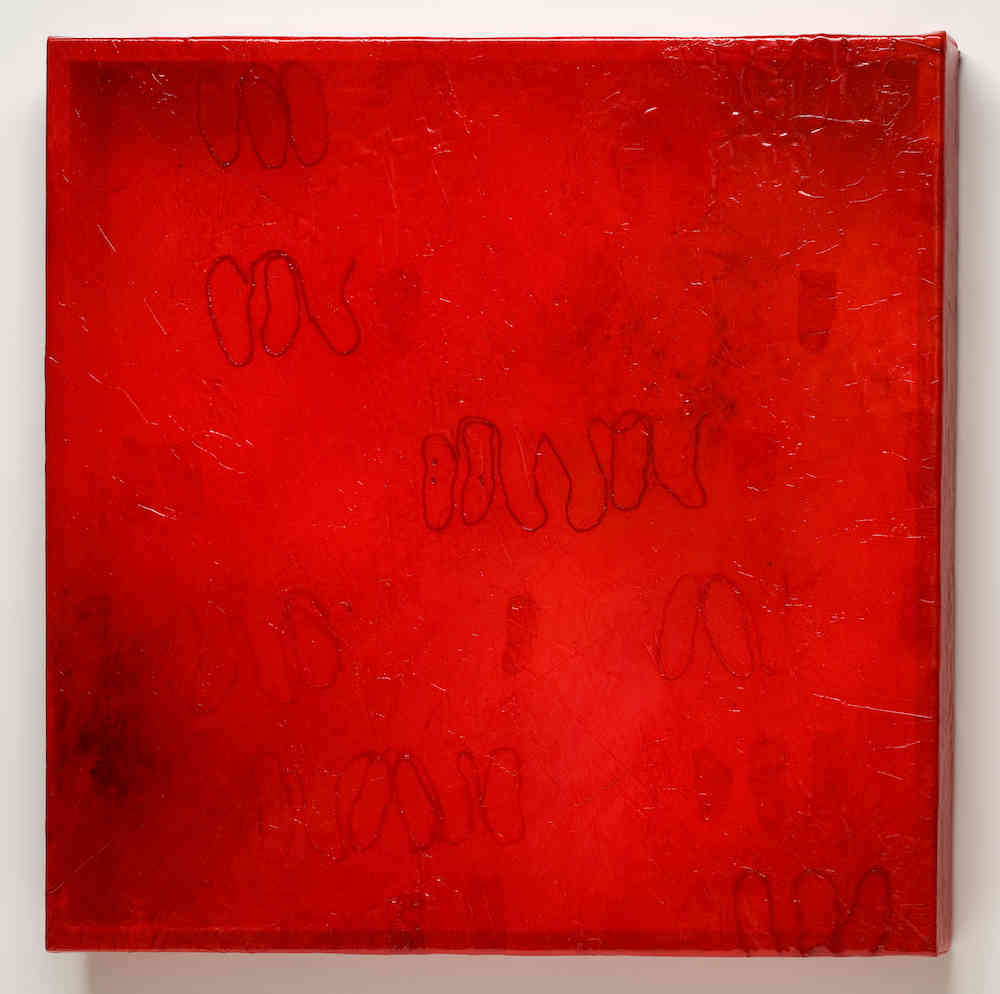 The source of the problem, in my opinion, is deep.  Recently, I attended a panel discussion at a Manhattan art gallery that has specialized in contemporary American art since the 1970s.  The focus of the conversation was the New York art scene over the past forty years.  I found the underlying premise myopic since the presumption was that during this period art was being produced solely in New York and, perhaps, Paris.  After the discussion I was introduced to the moderator who is also the owner of the gallery.  When he learned that I collected art by contemporary Native artists he only said one word: “Navajo!”  Though I said nothing, I was shocked by this contemporary art expert’s lack of awareness and the narrow breath of his knowledge.  His expertise appeared to be limited to artists who had lived and worked in Manhattan’s East Village.  Furthermore, most of the artists on the panel seemed focused on fact that it is difficult for artists to live in Manhattan because of the high rents and they seemed to believe that they could not create their art anywhere else.

After the discussion, I wondered how many other “art experts” had little or no knowledge about the work of contemporary Native American artists.  It seems to me that they are trapped in the outmoded idea that “Indian art” is more craft than art, that it is rigidly traditional, and that it never changes.  In the minds of many, there is a great divide between art produced by living Native American artists and American art. 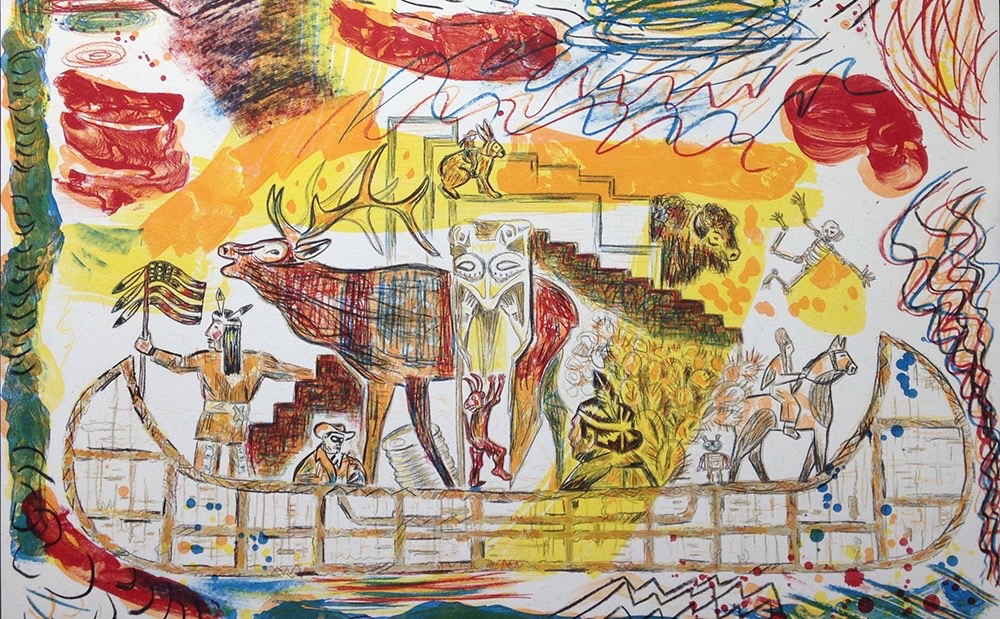 Even the fabled Metropolitan Museum of Art falls short with regard to exhibiting the work of contemporary Native American artists.  Despite its vast holdings, only two small rooms are dedicated to Native American art and when I lasted visited there were only two contemporary works on display, both of which were traditional in nature.  Overall, these galleries create the false impression that Native American creativity ended sometime in the mid-twentieth century.  There is also no indication that the work of contemporary Native American artists is rich and varied and that much of it is decidedly non-traditional.  To The Met’s credit, when “The Plains Indians: Artists of Earth and Sky” was presented the work of contemporary Plains Indian artists was included.  However, it was located in the very last room of the exhibition, leading some to feel that this section was “tacked on” as an afterthought.  Although Jaune Quick-to-See Smith’s work  was included in “The Plains Indians” and is in the Met’s permanent collection, I had never before seen it exhibited at the museum.  Ms. Smith’s work is also in the permanent collection of  the Whitney Museum of Art and the Museum of Modern Art in New York but I have never seen it presented at either institution. 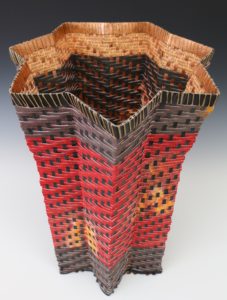 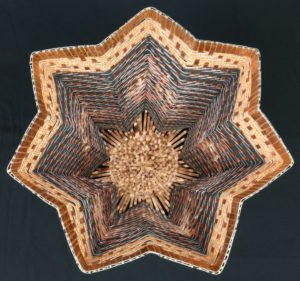 The Fire Within (Interior). 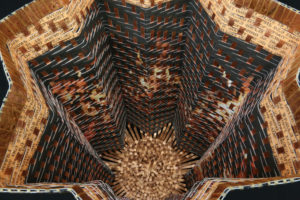 Photos courtesy of the artist.
The Fire Within (Interior).

Fortunately, more and more museum curators and directors are coming to realize that the term American art is much broader and more complex than they had previously understood.  Perhaps the problem lies with education.  In the past, few, if any, college art departments offered classes in Native American art or included it in survey courses.  On the rare occasions that it was presented, the focus was invariably on the traditional arts.

There is no question that Native American art had a profound influence on 20th century art.  In the 1940s “The Indian Space Painters,” such Will Barnet, Steve Wheeler, Barnett Newman, Perter Busa, and Howard Daum, took inspiration from Northwest Coast art; from the late 1940s to the early 1950s a number of the Abstract Expressionists such, as Jackson Pollock and Richard Pousette-Dart, were stimulated by a diverse range of Native American art; and, later in the century, Pop artists Roy Lichtenstein and Andy Warhol created works incorporating a wide variety of Native American symbols and motifs.  Imagine how exciting it would be if the work of “The Indian Space Painters,” the Abstract Expressionists, and Pop artists were exhibited with Native works that inspired them or if the work of contemporary Native American artists were presented along with that of their non-Native counterparts.

However, in spite of the impact Native American art has had on American art of the 20th century relatively few people know this fact because it is only minimally acknowledged in most encyclopedic museums if it is mentioned at all.  When it is exhibited, the work of Native American artists is treated as if it exists in some sort of vacuum, separate from the work of American artists of other races and ethnicities.  Usually, to see Native art one must go to a museum specializing in Indian art or to an ethnographic or Natural History Museum. 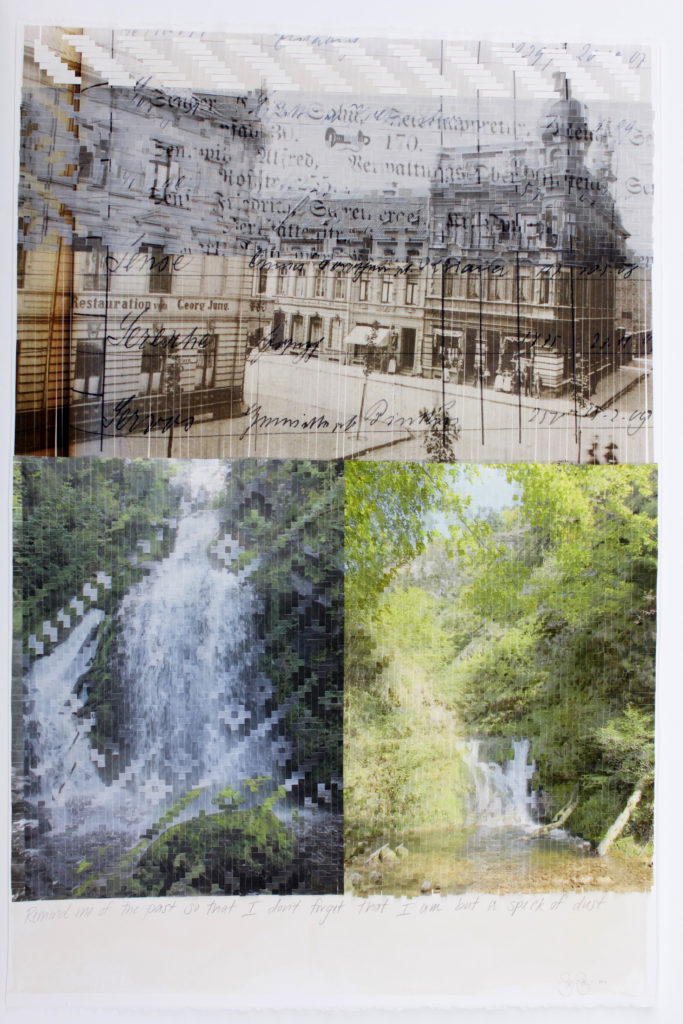 Collection of E. J. Guarino.  Photo courtesy of the artist.

At the Indianapolis Art Museum the art of Native America is confined to two small galleries, off in a corner, separate from other American art.  The most modern Native American works on view are by Maria Martinez and Lucy Lewis. As for art produced by contemporary Native American artists, the impression is that it just doesn’t exist.

The Indiana University Art Museum in Bloomington, Indiana offers a vastly different approach to the exhibition of art by contemporary Native American artists.   At the very end of “Art of the Western World: Early Medieval to the Present,” a permanent exhibition, the work of George Segal, Sol Le Witt, Barbara Hepworth, Donald Judd (all identified in the wall texts as American), is presented with Sage and Sweetgrass, a painting by Jaune Quick-to-See Smith (also identified as American).  The curatorial notes explain that the artist was born on the Flathead Indian Reservation in Montana. The Indiana University Art Museum is an exception but it should be the norm.

Museums do not relegate the work of American artists of other racial and ethnic backgrounds to separate galleries and artists such as Andy Warhol (Slovak-American), Kara Walker (African-American) and Yasuo Kuniyoshi (Japanese American) are all usually simply referred to as American, usually with an explanation of their heritage in wall texts. 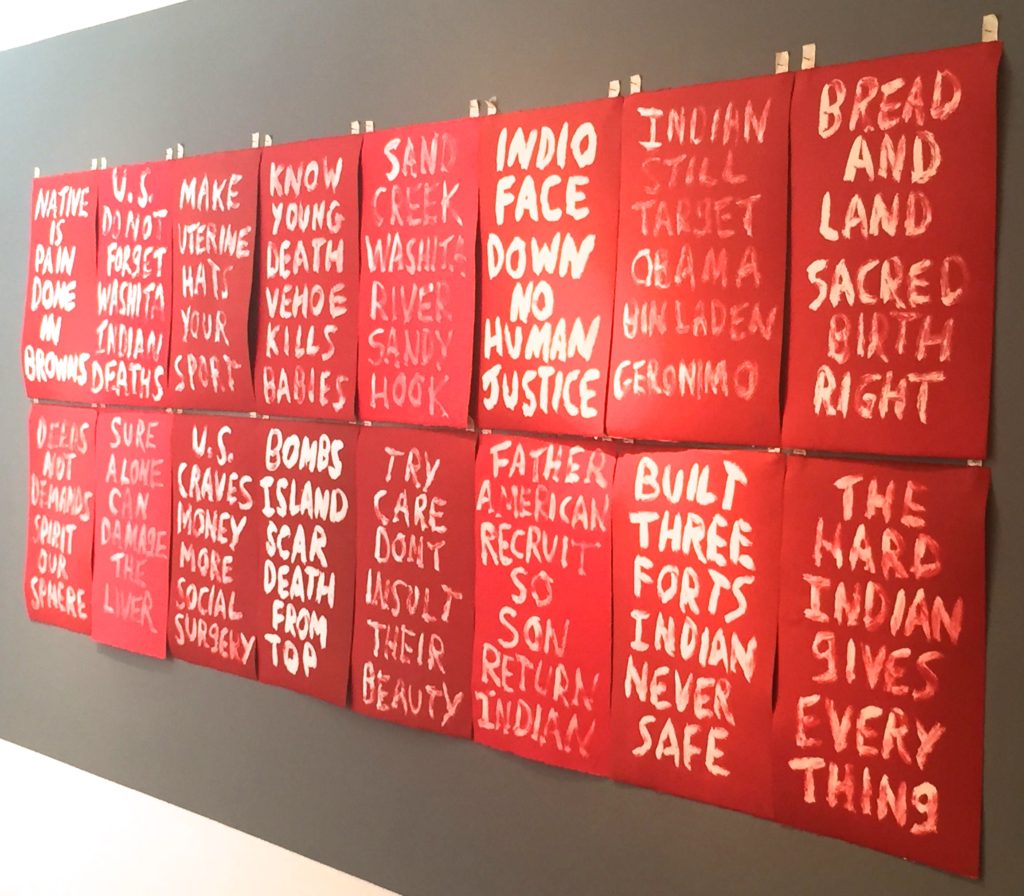 Native Americans, in particular artists, are as engaged with the contemporary world as much as any other group.  Like other artists, Native artists live contemporary lives and their art reflects as much.  They have been exposed to a wide range of cultures, concepts, media, and materials which is evident in what they create but it is only recently that the perception of Native American art as something eternally fixed and separate has begun to change.  One of the leaders in this effort is the Denver Art Museum.

When “Super Indian: Fritz Scholder, 1967 – 1980” opened at DAM the exhibition was not presented in the museum’s American Indian galleries but in those dedicated to modern and contemporary art.  Furthermore, following its Denver debut, the show traveled to the Phoenix Art Museum and the Nerman Museum of Contemporary Art rather than to those dedicated exclusively to Native American art.