Chase Kawinhut Earles is one of the leading Caddo potters working today.  He’s not just a revivalist but creating his own modernist versions inspired by historic Caddo pottery.  Many people are more familiar with the forms and techniques of Pueblo pottery from the Southwest.  Caddo pottery creates a new learning curve.  Caddo pottery was created between 800 and 1800 and had incredibly diverse forms and designs.  In terms of land area, it ranged from the Mississippi region to present-day Oklahoma and Texas.  For an artist like Chase, this provides a lot of history to pull from for making his pottery.  So why look to the future? Chase had an idea that referencing futuristic shapes, such as those from Star Wars, would provide a reference point of understanding.  Looking at the pairs he created, it is easy to see how well this concept works.

Indigenous Futurism is a mode of artistic creation that has found a voice in Native Art for about the past 20 years.  Artists like Virgil Ortiz, Ryan Singer, and even Al Qoyawayma have taken full advantage of stepping out of the safety zone of their more traditional art.  Over the past several years credit must also be given to museum exhibits at the Museum of Northern Arizona (The Force is with Our People) and IAIA Museum for Contemporary Native Arts for Native Futurism (Indigenous Futurism) exhibits.  Chelsea Herr has written, “Indigenous Peoples, and more specifically Indigenous Futurists do not appropriate from the dominant culture.  Rather, they Indigenize the world of popular culture and science fiction.  The artists strategically employ recognizable characters, environments, themes, and dialog from such ubiquitous franchises as Star Wars.  Sometimes subtly, sometimes explicitly, these artists Indigenize pop culture worlds not just with the visible presence of Native figures, but also with Indigenous cultural narratives, ceremonial and kinship systems, and modes of knowledge production.” (Indigenous Futurism, 2020).  Furthermore, Chase’s use of Star Wars as the reference point is not just about form.  He has found something deeper through the process.  Chase wrote with passion about the creative results of working on this body, a project there seems simple at first but resulted in a more profound understanding of the work within the Indigenous Futurism world. 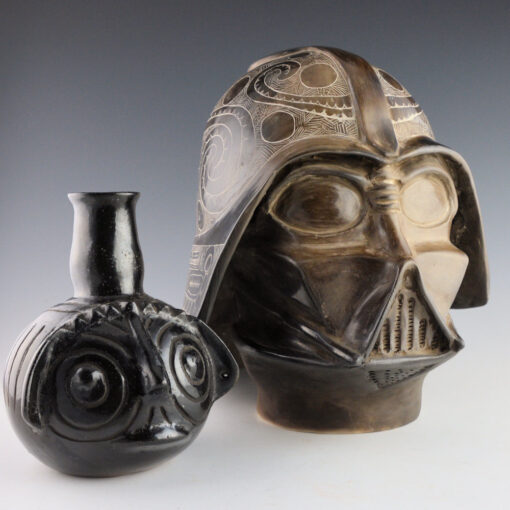 Do You Know Caddo?

Many don’t know about the Caddo. We are an ancient moundbuilding tribe whose identity came into focus around 800 AD but were in the same place before that for eons.  We were known across the country and across the oceans for our pottery. We were one of the largest and strongest and most influential tribes just west of the Mississippi. The state of Texas comes from a Caddo word meaning ‘allies’. But then we almost disappeared as the result of disease and displacement.

Our pottery was extremely skilled crafted.  It was often created to represent revered items and animals within our natural world, in our stories, and in our cultural knowledge. People today call these effigy pots.  That is most probably a colonialistic term when, in short, they are vessel sculptures of the world around us. They represented everything from the history of our people, to ceremonies, to the balance we believed was important in governing.

The “disappearance” of our people was first manifested by diseases that were brought by the explorers.  That killed the vast majority of our tribe, followed by the settlers’ encroachment and ultimately removing us from our homeland. This has the effect of destroying the majority of a tribe’s cultural identity, lifeways, and knowledge. Then came the modern era’s erasure of Native presence in the mainstream and the separation of our people from communal life.  Our people never had a chance to create our traditional sculptures and pottery showing our current lives, environment, and culture. That is what I aim to do. Indigenous Futurism gives me a way to modernize Caddo pottery.  By using science fiction as a foundation, such as Star Wars, it creates an additional immediate familiarity for the viewer.  Each piece becomes a means to create awareness of our people, culture, and finally creating a more complex narrative. This medium speaks to many aspects of our tribe’s existence from creation to contact, from our native beliefs and knowledge to our destruction and revival.

I use popular culture and mainstream science fiction to create new Caddo effigies and pottery in order to carve out a space to rebuild Caddo pottery and our cultural survival. It gives my work a new voice that can reach even more people and also simultaneously be understood more easily by either subverting or enhancing the pop culture narratives. It also gives me a way to break away rise above the noise of our often appropriated cultural art, undermined not only by systemic erasure but by our own Southeastern Native artists struggling to understand their own long-oppressed culture.

In my first Indigenous Futurism pieces, I sought like many before me to subvert the narrative on pop culture, science fiction, and Natives, and to show the difference between appropriation and Indigenization. 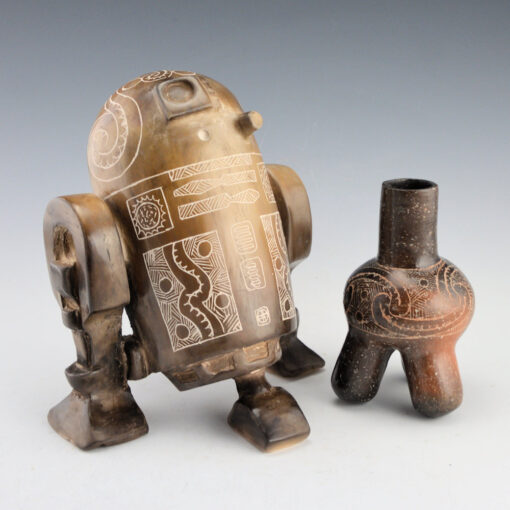 I saw R2D2 as a healer, BB8 as a trusted companion whose entire life is a constant cycle like that of the rolling water of Caddo knowledge. They are adorned by our Caddo iconographic and design language as if they were born into that world or one that will be. 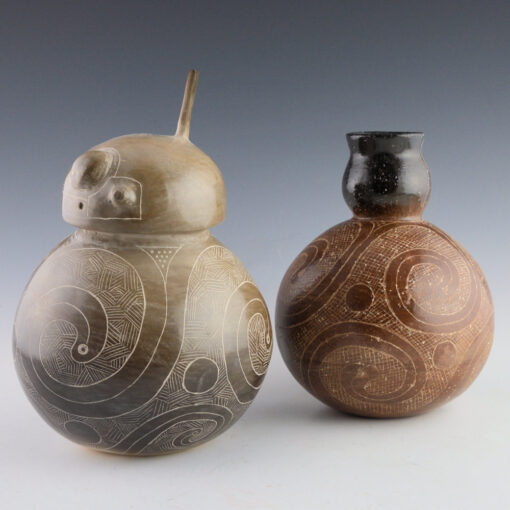 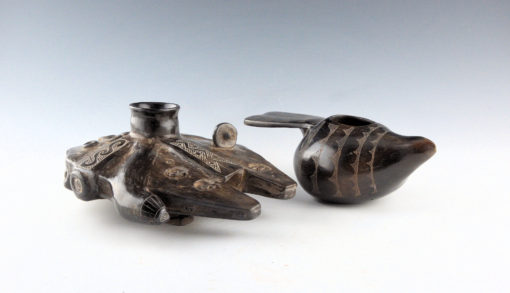 I built a clay millennium falcon as a powerful animal to be revered.  As for Darth Vader was he an oppressor, or was he misunderstood? 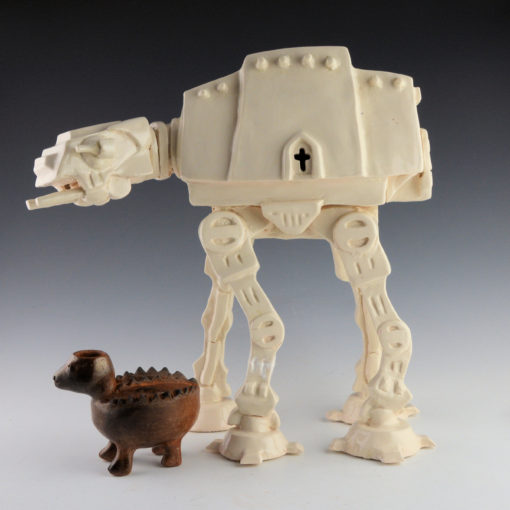 And finally, the Imperial Walker as the Oppressor come to proselytize and convert us Caddos from already believing in one God, to believing in their God. These Caddo effigies are now the first modern-day interpretations of the culture and environment we live in. I use “First” a lot in things I describe or announce in my art and cultural activity. This is to erase the colonial’s “rebranding” of everything they said they did without recognizing we did it first. We were already here. That is why I “First” things so often. To help show the public that the Caddo are still here and still creating and pushing the creative edge for the future of not only my tribe but all Native art.