One of the earliest catalysts of my passion for Native art was the Brooklyn Museum.  It was there, in the early 1980s, that I first saw the pottery of Lucy Lewis, an event that set me on a journey of over thirty years collecting ceramic art created by Native artists.  That experience was also the springboard for my eventually acquiring a wide variety of Native American art.  Because of the Brooklyn Museum, my curiosity was aroused with regard to Northwest Coast art as well as art created by the ancient Paracas, Nasca, Chimu and Inca cultures of South America.  In retrospect, my first visit to the museum probably planted the seed for my future trips to the Southwest, Washington State and Alaska and also to Mexico, Peru, Bolivia, Ecuador and Chile.  Over the years, I have returned to the museum to marvel at its exceptional permanent collection of the Indigenous arts of the Americas as well as to see special exhibitions.

However, during a recent five year period almost no Native art was on view, something that confused and troubled me.  The opening of “Life, Death, and Transformation in the Americas,” a spectacular ongoing exhibit, set everything aright.  The reason Native art had been absent was made clear: the museum had been in the process of re-envisioning its presentation of the Native art of the Americas.   The concept of presenting all non-Western art together on the first floor has been abandoned.  The permanent collection galleries at the Brooklyn Museum had been structured so that the public first encountered “primitive art” on the first floor and then ascended through various cultures and civilizations until reaching the apex – European and American art – on the upper floors.  This is no longer the case.  Because the museum’s holdings are so diverse, art by Indigenous North, Central, and South American artists can be viewed in relationship to work produced by artists of other cultures and time periods.  According to Nancy Rosoff, Andrew W. Mellon Curator of the Arts of the Americas, and Susan Kennedy Zeller, Associate Curator of Native American Art, one of the goals of the museum’s staff is to eliminate artificial art historical divisions in the presentation of artworks.

The Indigenous art of the Americas can be seen in two spectacular and very different exhibits: “American Identities: A New Look” and “Life, Death, and Transformation in the Americas,” both of which are on the fifth floor.

“American Identities” is organized around eight themes: From Colony to Nation; A Nation Divided: The Civil War Era; The Centennial Era, 1876–1900: Tradition and Innovation; Everyday Life; Expanding Horizons; Inventing American Landscape; Making Art; and Modern Life.  The introductory wall text sets the tone with the following statement: “In an effort to broaden conventional notions of what constitutes ‘American‘ art, we have also included Native American objects . . . .” 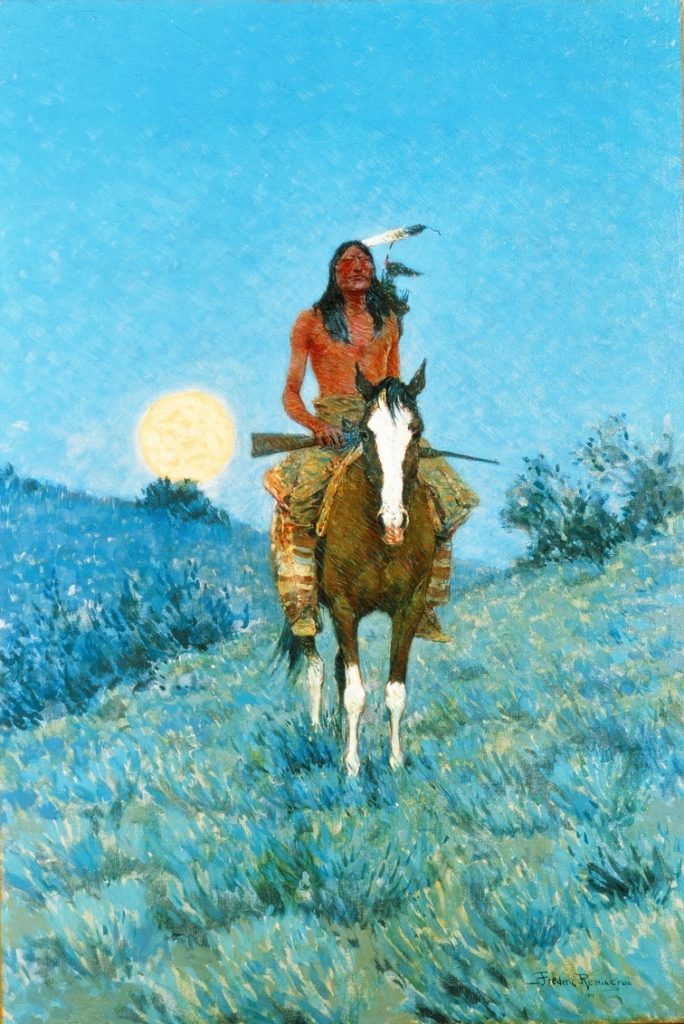 The nearby “Life, Death, and Transformation in the Americas” affords visitors the opportunity to appreciate art by Native North, Central, and South American artists of various eras from a very different perspective than that of “American Identities.”  In “Life, Death, and Transformation” the work of Native artists is presented in conversation with that of other Native artists.  Museum-goers are given the opportunity to immerse themselves in this very special art that is unique to our hemisphere.

The introductory wall text sets forth the overriding theme that the exhibit “explores some of the ways in which Native peoples of North, Central and South America, past and present, have expressed their beliefs about the world around them.”   According to Nancy Rosoff, “The themes of the exhibition are universal and cross various cultures.”

The show opens with a Huastec stone sculpture (Mexico, circa 900-1250 C.E.) of a man carrying a skeleton on his back and closes with the equally dramatic 19th century Kwakwa̱ka̱’wakw Thunderbird Transformation Mask from British Columbia.  In between visitors are treated to over one hundred masterpieces, twenty-one of which have never been seen by the public. Other highlights are a ceramic Storyteller figure by Helen Cordero (1987); Making Babies for Indian Market, a 2004 ceramic sculpture by Roxanne Swentzell; a Paracas ceramic funerary mask of the Oculate Being; two Heiltsuk cedar house posts; the justly famous “Paracas Textile;” and a Coclé gold plaque with an image of the Crocodile Deity.

Entering “Life, Death, and Transformation in the Americas,” the visitor immediately encounters a life-size Huastec Life-Death Figure.  The sandstone sculpture of a man carrying a human skeleton on his back powerfully captures the interconnected concepts of life and death that played such an important role throughout Mesoamerica.  The human figure, representing life, is portrayed as the wind god, Ehecatl-Quetzalcoatl, creator of humankind; the skeletal figure with a protruding heart, suggestive of human sacrifice, symbolizes death.  The skeleton wears a collar and skirt decorated with a half-circle motif associated with the sun and Venus, the morning star.  Ears of corn which, like the sun and Venus, are references to agriculture, fertility, and life decorate the sculpture’s arms and legs.  One of the masterpieces of Indigenous American art, the Huastec Life-Death Figure is a fitting introduction to the works that follow.

Photos courtesy of the Brooklyn Museum

In a nearby showcase, museum-goers are treated to two exceptional examples of ceramic sculpture: Helen Cordero’s Storyteller and Roxanne Swentzell’s Making Babies for Indian Market.  These two works bridge the 20th and 21st centuries.

The work of Helen Cordero is deeply rooted in Pueblo traditions.  When the artist created her first storyteller in 1964 she was drawing on the Cochiti tradition of ceramic figures called monos, which in the 19th century caricatured Hispanics, Caucasians, and Navajos as well as Mexican circus performers.  The term mono, Spanish for monkey, was originally used to denigrate these works as mere tourist art.  Cordero raised the form from folk art to fine art through her intelligence, wit, and exceptional craftsmanship.  The size and decoration of each figurine varies as does the amount of children around the storyteller.  The storyteller on view is possibly the last one made by the artist.  Like all of the artist’s sculptures, this one is hand modeled and unique.

Exhibiting Roxanne Swentzell’s Making Babies for Indian Market next to Helen Cordero’s Storyteller is a brilliant curatorial choice since the contemporary piece humorously references the earlier work, which became an iconic symbol of Native American art and culture.  Swentzell’s sculpture draws on the storyteller tradition but gives it a cynical interpretation.  The “babies” of the title symbolize the pots that are produced for collectors and various Indian art markets as well as Native creativity, which is often appropriated and misrepresented by mainstream culture.  The piece represents a Pueblo woman in traditional garb, balancing a pot on her head from which two babies emerge while two others, already born, sit on her shoulder and lap.  This large, complex, hand-formed sculpture is a masterpiece of ceramic art. 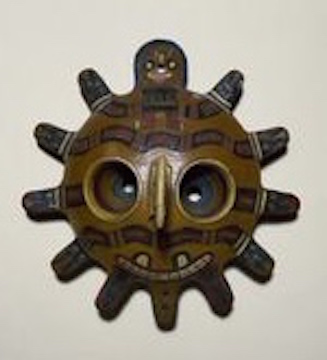 In the case to the left of Helen Cordero’s Storyteller is a ceramic mask by an unknown Paracas  artist (dating from between 300 B.C.E. and 100 C.E.) that is equally as spectacular as the modern ceramic works.  The piece, which doesn’t look as if could be worn on the face, most probably adorned a mummy bundle.  This mask, from the South Coast of Peru, represents a mysterious deity referred to by scholars as the Oculate Being because of its strange, oversized eyes.

Further on stand two Heiltsuk house posts, which are visually imposing and powerful works of art.  Part of a set of four, they exemplify the Brooklyn Museum’s philosophy of incorporating Native voices through art.  Since the posts were owned by the Heiltsuk Eagle Clan of Yálátli (Goose Island), Susan Kennedy Zeller elicited information about them from Harvey Humchitt, chief of the clan and asked his permission to share it with the public.  The large, beautifully carved cedar house posts depict the Heiltsuk creation story, which is on a wall text nearby. 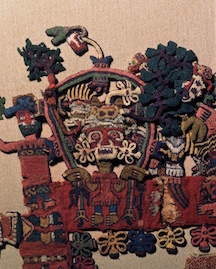 Photo courtesy of the Brooklyn Museum.

Dazzling in its beauty and artistry, the “Paracas Textile” is justly one of the most famous pre-Columbian Andean textiles in existence.  This masterpiece was actually made by the Nasca, another ancient Peruvian culture, rather than by the Paracas people.  Most likely worn during religious ceremonies, this exquisite mantle is decorated with ninety figures many of which have been interpreted as humans impersonating gods so as to be intercessors between the earthly and  supernatural realms.  Other imagery illustrates Andean animals, wild as well as cultivated plants and trophy heads depicted as germinating seeds, which suggest the cycle of life and death.

Worn as an ornament attached to clothing, the Coclé plaque with an image of the Crocodile Deity is one of the more spectacular gold artworks on view.  Worshipped in Panama for over a thousand years, this strange being was probably associated with water, power, and death as well as with the sun and fertility.   The central figure is surrounded by smaller crocodiles and the design of the border suggests the protective pointed scales on the animal’s back.

The Thunderbird Transformation Mask in the exhibit’s final gallery was worn during Winter Ceremony potlatches during which the wearer, whose body was covered with a cape or feathers, opened and closed it to great dramatic effect.  Closed, the mask portrays a bird’s head with a large yellow beak but, when the dancer opened it, the head and large beak divided to reveal a bird with outstretched wings.  The piece is also highly decorated with images of the sisiutl or lightning snake.   This large, complex mask is a tour de force.

The Namgis clan of the Kwakwa̱ka̱’wakw believe the Thunderbird to be an Ancestral Sky Being that created thunder by ruffling its feathers and lightning by blinking its eyes.  The Namgis tell of a time when a human was turned into a halibut and the Thunderbird descended from the heavens to help him.  Afterward, Thunderbird removed his headdress and winged cape and appeared as a man.  The Thunderbird Transformation Mask was used to dramatize and illustrate this story.

“Life, Death and Transformation in the Americas” and “American Identities” are not static.  Some of the pieces are frequently rotated out of each exhibit and are replaced by equally remarkable artworks, giving museum-goers a reason to return.

Those thirsting for more can see other examples of the Indigenous arts of the Americas in the Luce Center for American Art, which is also on the 5th Floor.

The Brooklyn Museum should be on everyone’s Must See List – New Yorkers and visitors alike.  In addition to the Indigenous Arts of the Americas, its encyclopedic holdings encompass Ancient Egyptian and Near Eastern art; African, Islamic, Chinese, Korean, Indian and Southeast Asian art; American, European and Contemporary art as well as 18th through 21st-century Decorative Arts.  The museum also offers exciting, cutting edge exhibits such as the recent “ Killer Heels: The Art of the High-Heeled Shoe.”  An easy subway ride from Manhattan via the 2 or 3 line, a visit to the Brooklyn Museum can be combined with the glorious Brooklyn Botanical Garden, which adjoins the museum, as well as with other cultural attractions.

The author would like to than the following Brooklyn Museum staff for their invaluable help with this article: Nancy Rosoff, Curator of Arts of the Americas; Susan Kennedy Zeller, Associate Curator of Native American Art; Sally Williams, Public Information Officer; and Brian Bentley, Curatorial Assistant, Arts of the Americas and Europe.