In all of contemporary Inuit art, there is no one quite like Shuvinai Ashoona.  Celebrated for her dark sense of humor, Shuvinai (as she is known to gallerists and collectors) has staked out a territory that is all her own.  By juxtaposing the familiar with the bizarre the artist creates a disturbing sense of disorientation in the viewer, which gives much of her work a surrealistic quality.  Often, she creates fantastical landscapes that seem to have emerged from the mind of Rube Goldberg, but much of her work is filled with her unique brand of humor and idiosyncratic symbols that clearly mean something to the artist, but often defy interpretation.  Over many years, Shuvinai has slowly but steadily increased her collector base through drawings and prints that are bold, frequently puzzling, and finely executed.  Almost all of her work has a strange and subtly disquieting quality, including her landscapes, which at first viewing appear to be faithful renderings of nature.  Shuvinai’s world is one that is mysterious, strange, and highly personal.  As an artist, she clearly creates from a contemporary sensibility, but her art combines the realities of modern life in the Arctic, aspects of Inuit culture, and personal symbolism. 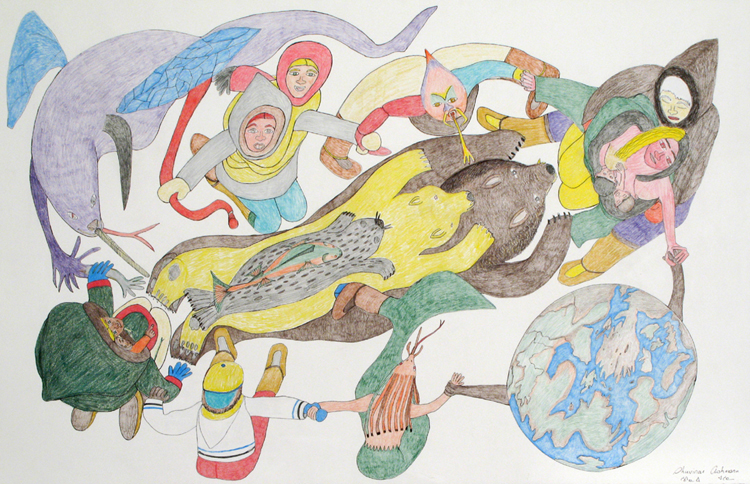 Composition (People, Animals and the World Holding Hands) is filled with Shuvinai’s unique imagery.  Richly symbolic, the piece expresses the artist’s desire for harmony among all living beings. The drawing shows humans holding hands with a mermaid, animals, and a personified planet Earth.  They form a circle around two dead bears and a dead seal, animals that give their life so humans may live.  In the circle an Inuit man supports the body of a bare breasted woman with two toned hair so that she can grasp the World’s hand.  The group also contains a bizarre purple creature with a forked tongue.  As is the case with much of Shuvinai’s work, what it represents is anybody’s guess, but it adds to the overall surrealistic tone of the drawing. In her singular style, Shuvinai makes a profound statement in a colorful and charming way. 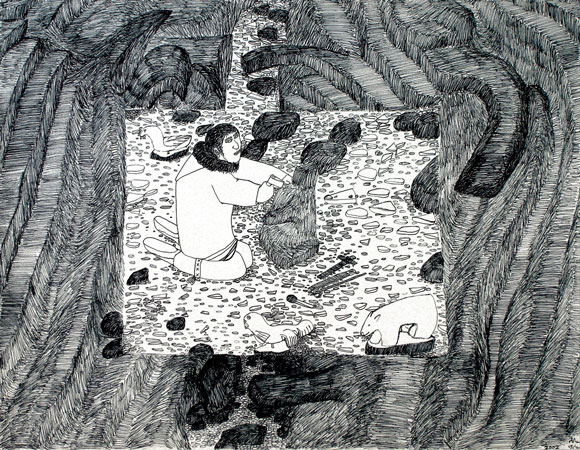 Often, Shuvinai creates bizarre landscapes that have a phantasmagorical quality.  Although at first glance Composition (Sculptor in Landscape) may look straightforward, upon closer inspection, the setting in which the artist has set her figure is decidedly one of her own imagining.  The world that has been created is obsessively detailed.  The earth is drawn with hundreds upon hundreds of dark lines.   Into this scene, Shuvinai places a figure that seems superimposed.  In essence, she has produced a drawing within a drawing.  The area of the work that contains the sculptor is much lighter than the rest of the piece.  Clearly, Shuvinai is spotlighting the figure and the importance of what he is doing.  As he creates a new carving, the sculptor is surrounded by finished works – a bear, a seal, a bird – while nearby lie his tools. 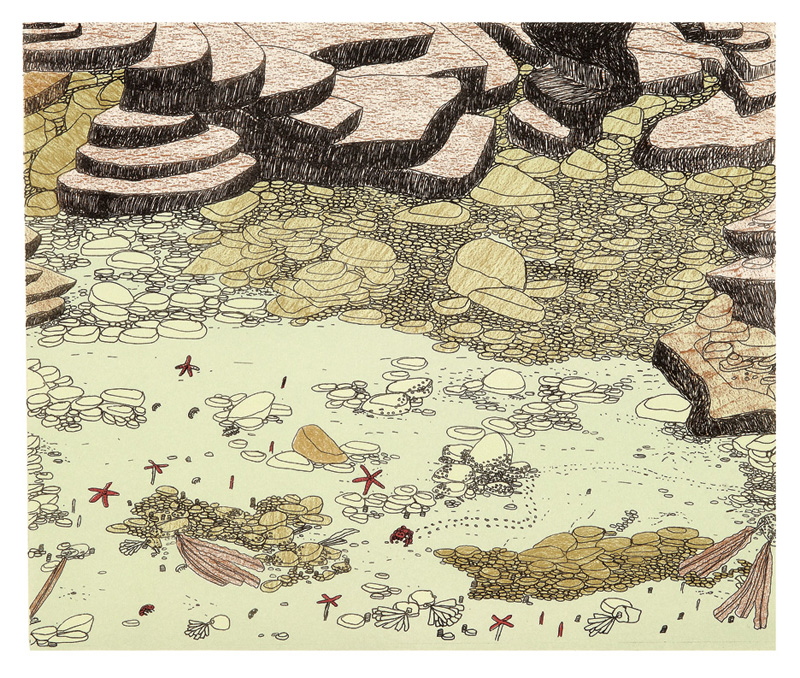 In Tidal Pool Suvinai Ashoona has once again created a distinct world.  While the sea creatures may look as if they have been realistically depicted, they have a strange, whimsical quality.  The delineation of the rocky terrain is similar to that in Composition (Sculptor in a Landscape) and all of the stones, down to the smallest, are detailed with great exactness.  Except for the red star fish, the scene is rendered in soft hues.    The artist is not trying to recreate a tidal pool on paper but, instead, is giving the viewer her response to this wondrous marine habitat.

Aujaqsiut Tupiq (Summer Tent) is daring in a number of ways.  Beyond the boldness of the tent’s placement on the page and the fact that it comprises most of what the viewer sees, the artist has made a number of other audacious choices.  With repeated viewings it becomes clear that there are many aspects to the work’s appeal.  It is obviously representational and yet it contains elements of the abstract, which add to the tension within the piece.  Also, the muted tones give the print a richness that is comforting and in contrast to a subtle detail that creates an air of mystery: a figure is either entering or leaving the tent, but the viewer cannot see a face. The person’s gender and purpose are intentionally kept from us and it is unclear whether what we are seeing is mundane or ominous.  Such enigmas are typical of much of Shuvinai’s work. 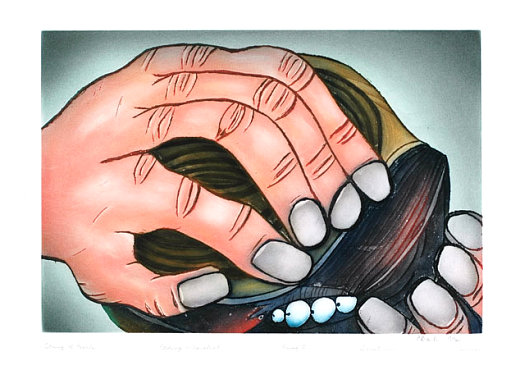 It can’t be denied that Shuvinai has a distinctive (some would say twisted) sense of humor, which is clearly on display in String of Pearls.  Large hands, which dominate the page, pry open a clamshell.  Of course, pearls are found in oysters, not clams, but that doesn’t matter to Shuvinai. It is just part of the fun.  Also, these little treasures are not found already strung.  To add to the humor of the peace, the artist has the pearls look like eyes that are peering out of the shell at the viewer.

Quilt of Dreams draws on the textile tradition of recording with fabric. However, Suvinai uses the print medium to show us her personal vision rather than to document past events or create abstract patterns.  Many of the images in the piece refer to earlier works created by the artist and represent portraits, landscapes, still lifes as well as imaginary worlds filled with strange symbols and weird creatures. The unusual choice of colors adds to the print’s somewhat unsettling quality.  It is certainly not what we have come to expect when we think of quilts.

Although the nude has had a long history in the Western art cannon, it is rare in the work of Inuit artists.  This subject matter is avoided out of fear of disapproval since Western Judeo-Christian ideas about nudity and sexuality have long been ingrained in the Inuit psyche.  Throughout history artists have used the nude to explore sensuality, power, gender relations, and religion, as well as sexuality.  Some have offered us the human body to contemplate as the most perfect example of beauty – Creation’s masterpiece.  Like their peers, contemporary Inuit artists are claiming their right to explore any aspect of the human condition they choose, including the human anatomy.  In Composition (Woman), Shuvinai offers the viewer the image of a nude woman modestly covering the intimate parts of her body with her hands.  Although the artist has done a number of nudes, it is unclear whether the image is a portrait or if it is imaginary.

In Composition (This is Me in My Coat of Many Colors) the artist has chosen to create a self-portrait.  The work is rather straightforward, as self-portraits go.  In referring to the piece, Shuvinai stated, “I made this sweater by knitting long pieces of colour and then I sewed them together.”  Clearly, she was so proud of the sweater that she decided to commemorate it in a drawing that is done in her usual colorful and charming style.   As with Composition (Woman), the artist chose paper that was forty inches long by thirteen inches wide, not a typical size for Inuit drawings.  The artist has produced a number of works on paper with these dimensions.  Pat Feheley (owner of Feheley Fine Arts, which specializes in Inuit art) has dubbed them “ribbon drawings” because of the unusual length of the paper on which they were created. 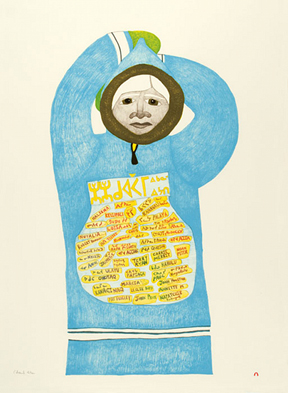 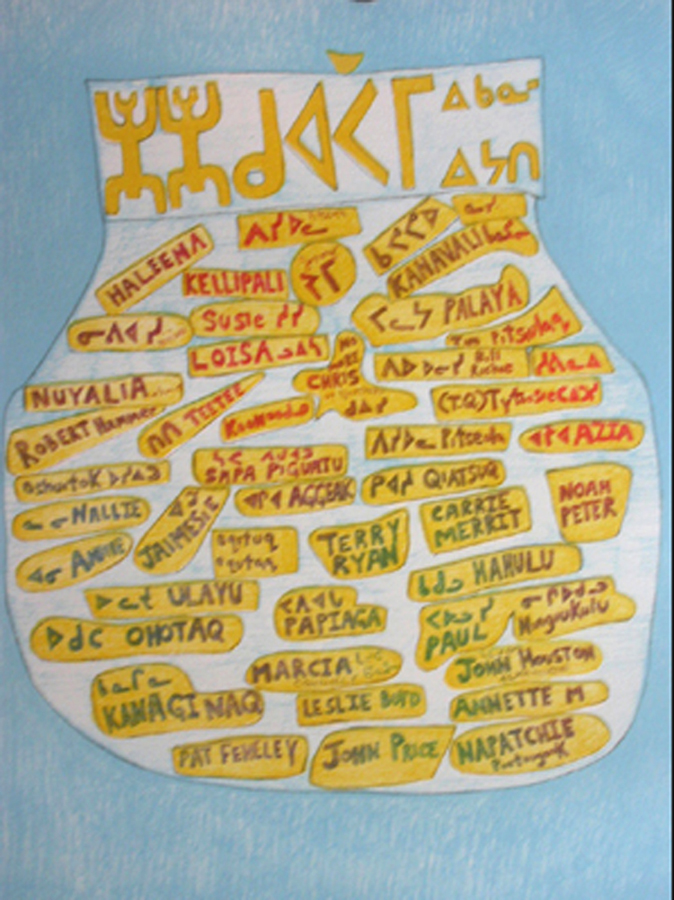 Tribute is a fascinating print on many levels. It is visually arresting because of the sweep of the figure’s arms, the striking face, and the use of the color blue. The piece is a self-portrait in which the artist has chosen to indicate that she “carries” what is essentially the history of modern Inuit graphics by placing on her clothing the names of promoters (such as James Houston and Terry Ryan), artists (including, Kananginak Pootoogook and Napatchie Pootoogook), gallery owner Pat Feheley, collector John Price, and others who have all contributed to making Cape Dorset graphics what they are today.  Shuvinai is aware that she is where she is as an artist because of many people and she clearly wished to honor them. 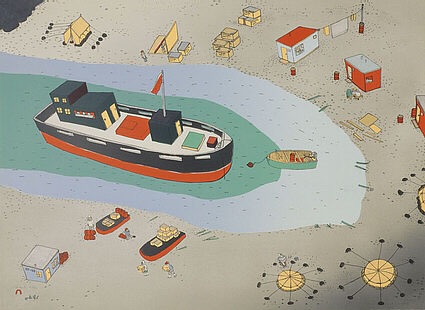 Shuvinai has done a number of prints similar to Summer Sea Lift, but in black-and-white.  Besides the striking use of color, the artist has chosen an unusual perspective – high above the scene.  Some scholars believe that Inuit artists often choose an “aerial” view when creating landscapes because they draw at tables, looking down at their work rather than using an easel, which would change their point of view.  Summer Sea Lift documents the arrival of a ship that will supply the necessities of the community until the following summer.  Shuvinai shows the summer tents in tan and the more permanent wooden structures in red and gray.  She also uses the color red to draw the viewer’s eye to the supply ship and to the smaller vessels, which are used to ferry goods to the shore. 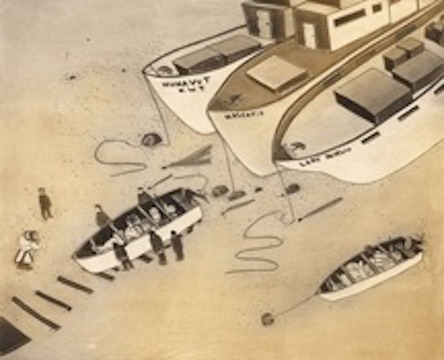 Because of it’s subject matter, Low Tide is a wonderful companion piece to Summer Sea Lift, especially since both have similar aerial view points.  The work shows three supply ships stuck on the sand, but the sepia tone gives the work an added dimension, suggesting nostalgia and hinting at the long days of summer sunlight.  Of the three ships, the Nascopie, which is in the middle, has entered into Cape Dorset lore, engendering prints and drawings by a number of artists. 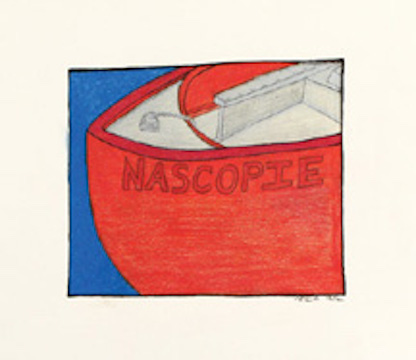 Sometimes Inuit artists record episodes which, though seemingly unimportant to outsiders, have had a major impact on their community.  The sinking of the S. S. Nascopie was just such an event.  This steamer had been used by the Hudson’s Bay Company as a supply ship since the beginning of the previous century, delivering provisions throughout the Far North.  On July 22, 1947, it hit a reef off Cape Dorset, but did not immediately sink.  The community spent a great deal of time removing the ship’s contents before they were lost.  For people who received goods from the outside world only once a year, the ship’s loss was historic.  The Nascopie took a long time to sink, allowing people in the community to return to it again and again to collect everything that was salvageable.  Although this incident occurred before she was born, Shuvinai obviously heard about it from elders and referenced it in a number of works.  It was clearly etched into the minds of Cape Dorset residents since, besides Shuvinai, other artists such as Napachie Pootoogook, her aunt, and Kananginak Pootoogook, her uncle, made reference to the sinking of the Nascopie in their work as well. 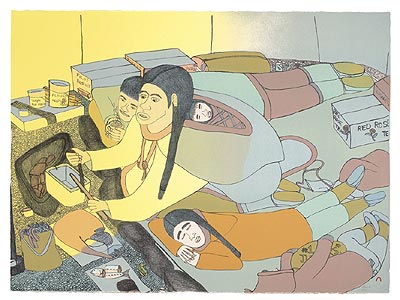 Arctic Evening glows with familial intimacy and is filled with wonderful details.  While their children sleep, a father sips tea and his wife, a baby on her back tucked in her amautik, tends a kudlik, or oil lamp.  Surrounding the family are their supplies: Red Rose Tea, Pilot Biscuits, cigarettes, salt, flour, sugar, baking soda, and toilet paper.  Before the mother is a cut up fish and other seafood.  The yellow hue that dominates the foreground suggests warmth, perhaps emanating from the kudlik.

Whether she creates phantasmagorical images filled with strange beings and symbols, surreal landscapes, a depiction of life in the Arctic, or portraits (real or imaginary), Shuvinai’s style is unique and is clearly identifiable to anyone familiar with her art.  Often, works that first appear to be solely representational, on closer inspection, turn out to have an abstract or surreal quality.  Although much of Shuvinai Ashoona’s work is unsettling, a great deal of it is infused with the artist’s individual sense of humor.  She is the very definition of idiosyncratic.  Hers is a unique voice that continues to draw collectors to her fascinating prints and drawings.