The Oregon Coast is rugged and visually stunning.  It is also rich in history, though much of it lies just below the surface of what the average visitor sees. There are tantalizing clues, however, in place names such as Clatsop, Nehalem, Tilamook, Coos Bay, Yachats, and Coquile, all of which are taken from Native American tribal names and languages indigenous to the area.  Clearly, the history of the Oregon Coast is more than what meets the eye and with a little bit of effort, it is possible to uncover it.

I’ve had the good fortune of visiting the region three times and I have become so enthralled with Oregon’s coast that I am already planning a fourth trip.  Over the years, as I’ve walked along the area’s many beaches I have marveled at the bounty that is readily available – sea urchins, clams, mussels, crabs, seabirds and their eggs, fish, seaweed, sea and land mammals, as well as berries, bulbs, roots, and seeds.  Today, tourists flock to Cannon Beach, a haven for the affluent, as well as to Seaside, Manzanita, Lincoln City, Florence, and other coastal resort towns.  However, long before Europeans reached the Pacific Northwest Native American peoples were living and thriving on the Oregon Coast.  This history has mostly been “buried” under what came afterward – Westward Expansion and all it entailed. 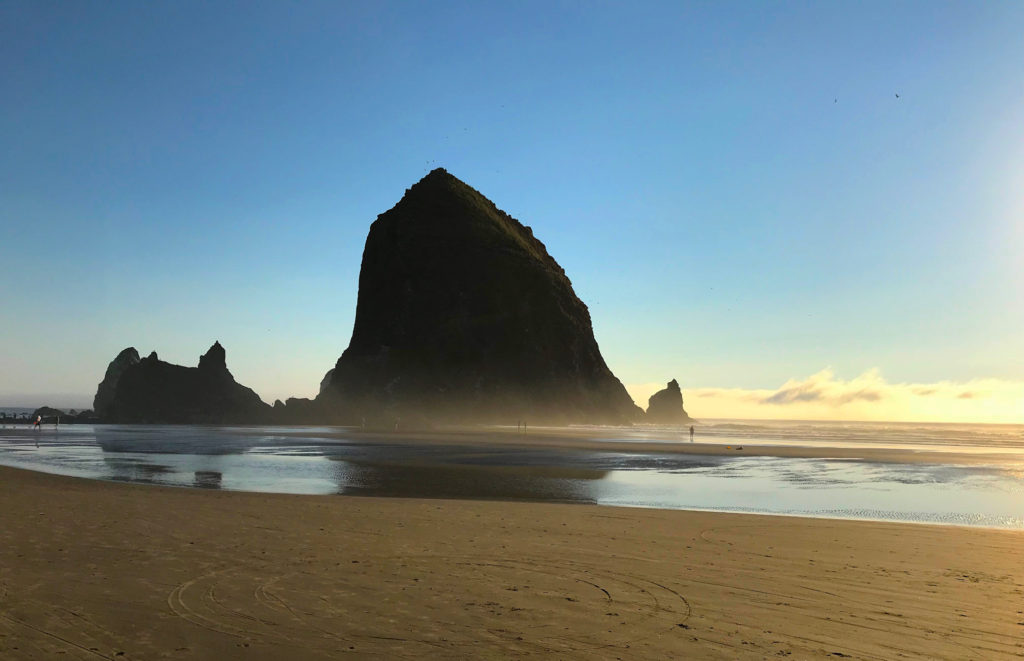 Compared to other parts of the country, the history of Oregon before the arrival of Europeans has received little consideration.  The Southwest has probably received the most attention from historians and archaeologists and when the Pacific Northwest has been considered the focus has usually been on the Native populations of Washington State, British Columbia, and Alaska.  However, there is a rich vein of history to be mined in Oregon, particularly the coast, for anyone interested in knowing what came before the expensive houses, restaurants, hotels, shops, tourists attractions, and roads that now cover the landscape. 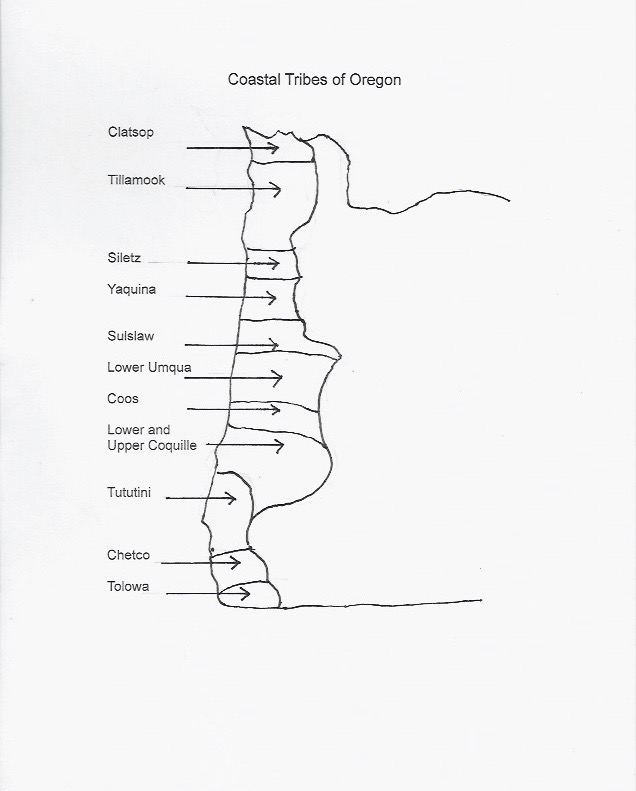 Tribes of the Oregon Coast.

A diversity of Native groups lived along the Oregon Coast and flourished on its bounty. The Clatsop, and Tillamook homelands stretched from present-day Astoria to Lincoln City.  Farther south dwelled the Siletz and the Yaquina near bays that are today named for them.  The homeland of the Siuslaw and Lower Umpqua ranged from Haceta Head south to the dunes near what is today Reedsport.  The Hanis Coos, the Miluk Coos, and the Upper Coquille lived around Coos Bay while the Lower Coquille were located around lower Coos Bay.  Villages of the Coastal Rogue tribe, also known as the Chetco and Tutuni, and the Tolowa extended as far south as present-day northern California.  Although these groups spoke a variety of languages, they all depended on the nearby sea and forests for survival and drew most elements of their cultures from them.  For the most part, the coastal tribes were cut off from one another because of the ruggedness of the landscape. They were also isolated from inland tribes by the Oregon Coast Range. This series of mountains extends more than 200 miles north and south and is thirty to forty miles wide.  Some elevations are as high as 4,101 feet above sea level with average elevations around 1,500 feet. 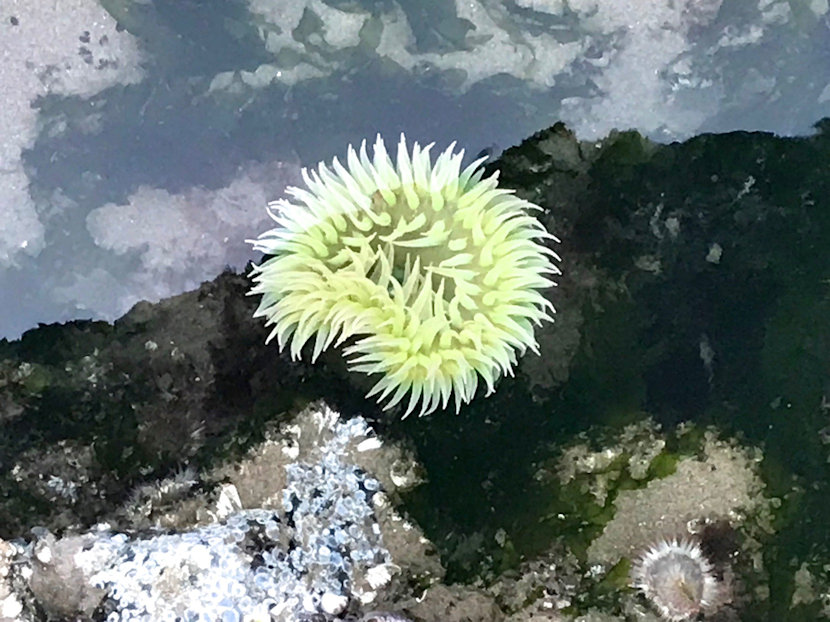 The tribes of the Oregon Coast were not nomadic.  They built their villages near rivers and estuaries since doing so afforded shelter from storms as well as offering access to a wider variety of foods and building materials.  Trees such as the Western Red Cedar were used to fashion canoes, house boards, mats, boxes, clothing, and utensils.  Although the various tribes tended to be isolated from one another, trails along the beaches served as trade routes, allowing them at various times to participate in extensive trade fairs held on the banks of the Columbia River.  The trade network stretched for many thousands of miles – as far north as the Arctic, inland to the Great Prairie, west to the Hawaiian Islands, and south to California and beyond. 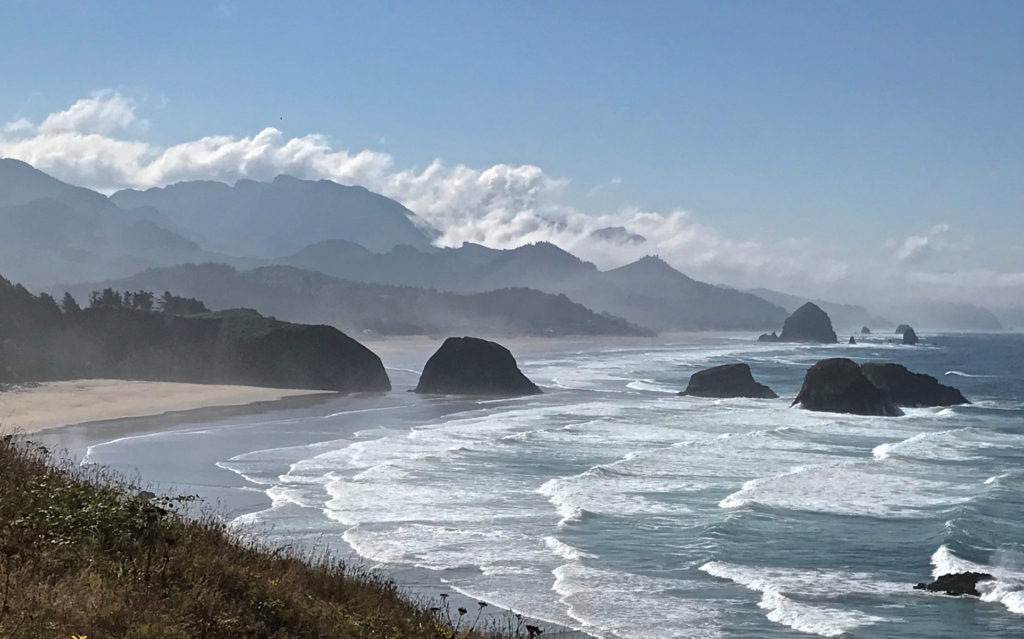 The original inhabitants of the Oregon Coast lived in a variety of structures from cedar plank houses to those that were semi-subterranean.  In general, agriculture was not practiced simply because there was no need to do so.  Nature provided all that was needed in terms of food, clothing, and dwellings.

In 1700 the Oregon Coast was hit by a devastating earthquake followed by a massive tsunami.  Although it is not known how many people were killed, the coastline, estuaries, and other low-lying areas were dramatically changed.  Houses, food stores, nets, fish weirs, canoes, tools, and utensils were washed away and natural resources destroyed. 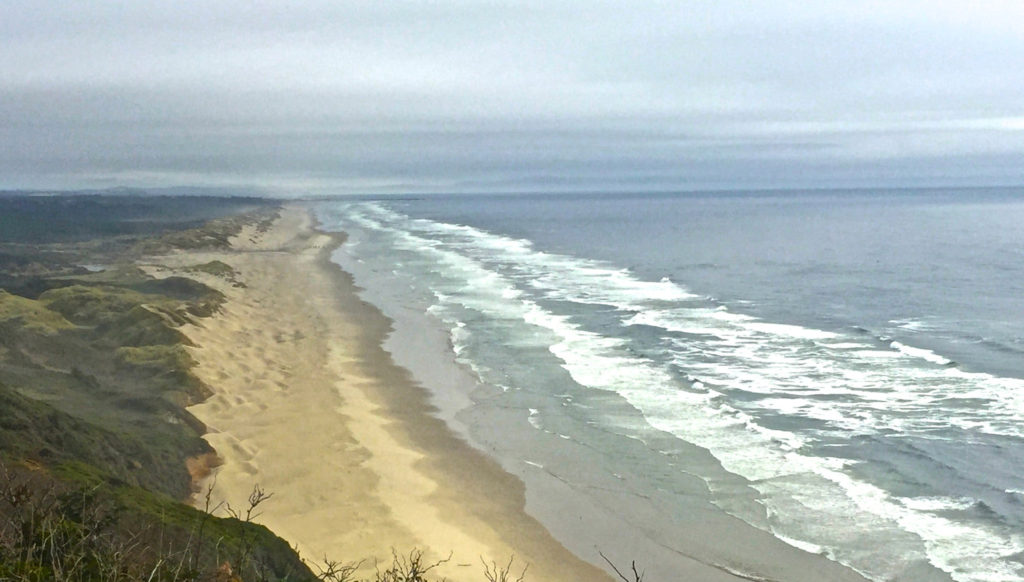 In general, the Native people of what is today Oregon were friendly towards the white explorers and traders since they afforded access to new goods and materials.  However, the arrival of Euro-Americans was to affect the Native peoples in ways that no one could foresee.  Along with increased trading possibilities, such as never before seen weapons, horses, sheep, and cattle, the newcomers unknowingly brought with them diseases to which the Native populations had no immunity.  Often the pathogens spread with shocking swiftness via trade routes to villages long before anyone in them ever saw a white person.  It is estimated that Oregon’s coastal tribes lost as much as 90% of their populations to influenza, smallpox, and malaria.  More lives were lost when conflicts eventually arose between Native tribes and Euro-Americans over the control of the area’s natural resources.  As settlers moved in they periodically committed acts of violence against the Native people in order to remove them from the land they wanted for themselves.  In one instance, an entire village was burned to the ground.  Tribes were forced to flee into areas that were the traditional lands of other groups, which caused territorial conflicts where none had previously occurred.  In an attempt at assimilation, many Native children were separated from their families and forced to attend boarding schools.  Missionaries, particularly Methodists, also played a role in this effort believing that doing so would make the coastal tribes less of a threat to the settlers and their efforts to take over Native lands.  In 1856 the tribes were forcibly removed to a reservation in Grand Ronde where they struggled to survive.  Although Oregon’s indigenous coastal peoples had occupied the area for thousands of years, with the arrival of Euro-Americans their way of life was changed forever. 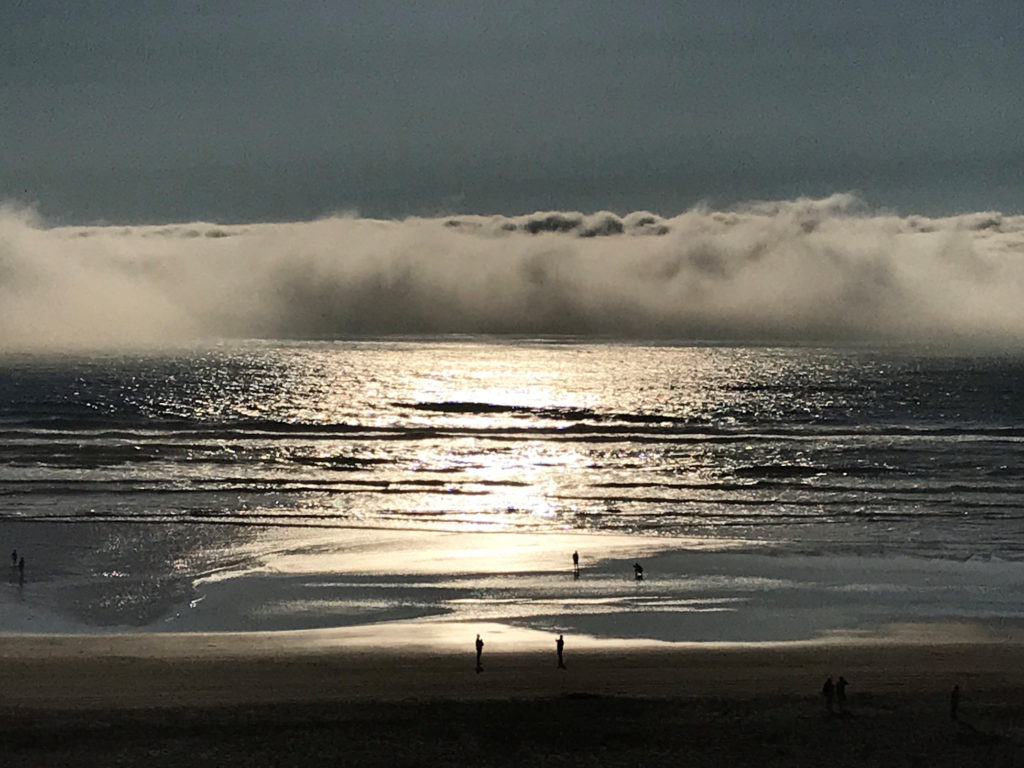 Today Cannon Beach occupies what was once the site of a Tillamook village and beach trails follow those used by the area’s first inhabitants.  Although the trappings of contemporary life hide much of the history of Oregon’s coast, with a little effort, one can discover more about the first people who inhabited the region.  In Astoria, the visitor center of Fort Clatsop, a unit of the Lewis and Clark National Historical Park, not only provides information on the Corps of Discovery but also contains details about the coastal tribes that were encountered.  Located farther down the coast in Coos Bay, the Coos History Museum contains artifacts associated with the Confederated Tribes of Coos, the Coquille, the Lower Umpqua, and the Siuslaw Indians.  Beyond spectacular scenery and great seafood, the Oregon Coast offers a rich historical bounty for anyone willing to take the time to look for it.