For those who are not Native American it may be difficult to understand why those who are, particularly Pueblo people, remain passionate about the Pueblo Revolt of 1680.  While for non-Natives this historical event is thought of as ancient history, for Native Americans it is an open wound – a reminder that their independence and all that that entails was stripped from them.  Diego Romero and other contemporary Native American artists often reference the Pueblo Revolt and the atrocities that led up to it – enslavement, whippings, amputations of limbs, and murders.  These abuses caused the pueblos to rebel in what has been called America’s First Revolution.

Beginning in 1540, the pueblos of Santa Fe de Nuevo México had been subjected to the intrusions of Spanish soldiers, missionaries, and settlers, resulting in violent clashes.  The Puebloans were pressed into service to build missions, forbidden to practice their religion, and pressured to convert to Catholicism.  The Pueblos were also denied access to fertile farmlands and water sources.  Any resistance was met with brutal force.

Also known as Po’Pay’s Rebellion, the revolt in 1680 involved most of the pueblos in Santa Fe de Nuevo México.  The plan was simple: on a specified day at each pueblo, the people would rise up and kill or expel their overlords.  Runners carrying knotted cords were sent to all the Pueblos.  Each day one knot would be untied and when the last knot was undone all of the Pueblos would act in unison.  All of the Spanish settlements and missions in New Mexico were destroyed.  Four hundred Spanish – men, women and children – were killed.  The revolt lasted from August 10 to August 21, 1680.

Pueblo Independence was short-lived, however.  Twelve years later, in August 1692, the Spanish returned to New Mexico and were able to retake it with little opposition.

depict the horrific treatment Native Americans suffered at the hands of their Spanish conquers often with the tacit approval of the Church.  The religious figure that looms large in both the drawing and the print is Father Junipero Sera, a Franciscan priest who founded missions in California and who was recently canonized by the Roman Catholic Church.  Serra has become a controversial figure among Native Americans since many believe that the Indians who built the missions were forced to do so.  Saints and Sinners asks the viewer to consider how Native Americans were treated in the name of Christ and to question just who is a saint and who is a sinner. 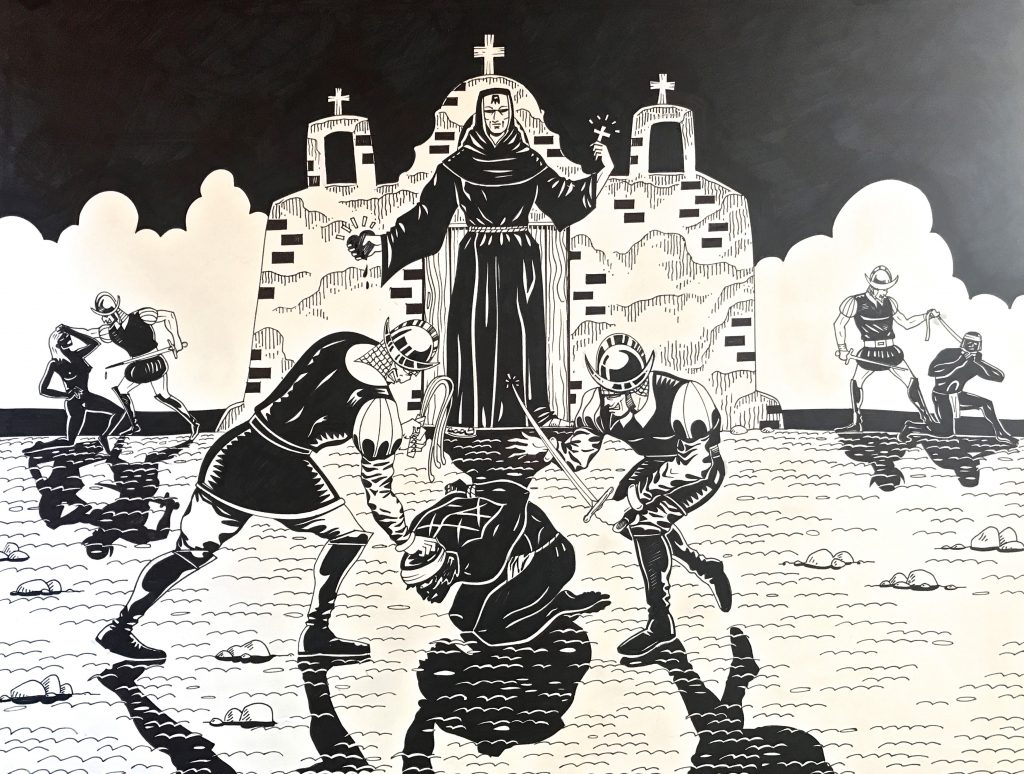 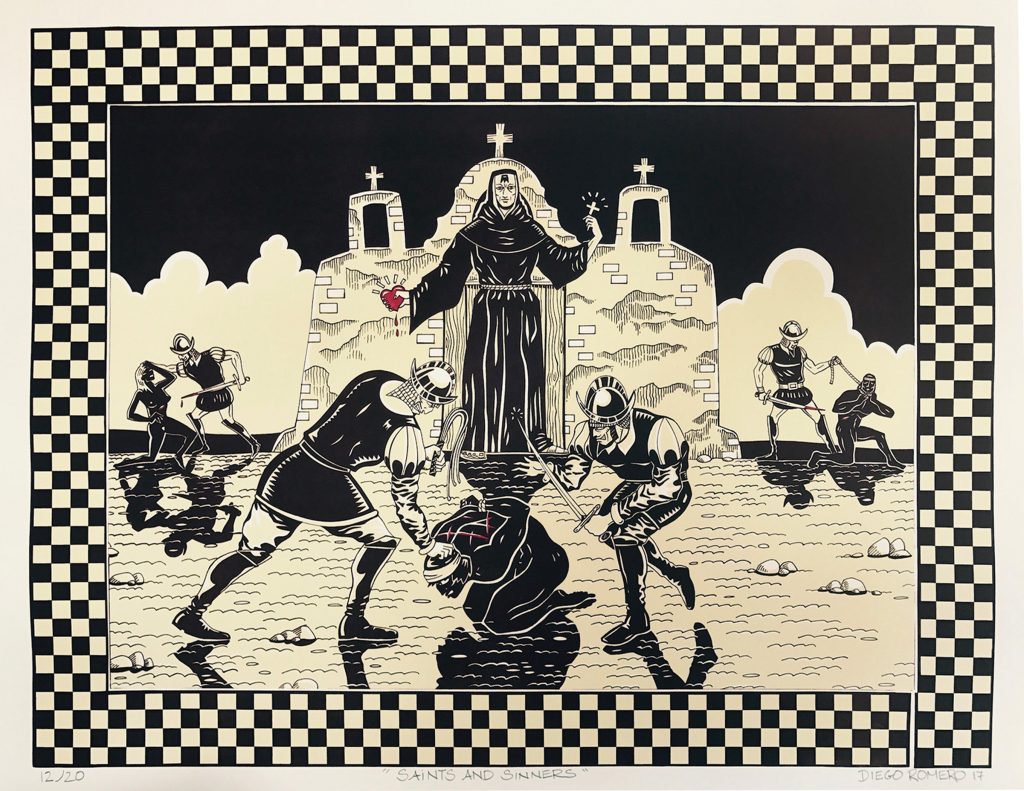 Having the drawing and print versions of Saints and Sinners in the same collection affords the rare opportunity to see the artist’s two approaches to the same subject and to consider the differences between the original drawing and the print.  This provides insights into the artist’s creative process.  The print (the artist’s largest to date) has an overall tone of black on yellow as opposed to the drawing’s mostly black on white.  Also, the artist created a boarder for the print and added the color red so that drops of blood as well as the heart that Serra holds in his right hand stand out.

In the same year that he produced the drawing and print of Saints and Sinners, Diego Romero also created three ceramic bowls that incorporate imagery seen in the works on paper.  However, the titles of the ceramic works indicate that the artist was also thinking beyond the time and place of the Pueblo Revolt.  The largest of the three bowls, like the print and drawing, is titled Saints and Sinners.  However, the smaller pieces incorporate imagery from the left and right sides of the drawing and print and are titled Rape of Gaia and Death of the Turk.   As with the print, the artist uses a decorative border as a framing device around the rim of each bowl, which draws the viewer in to the central imagery. 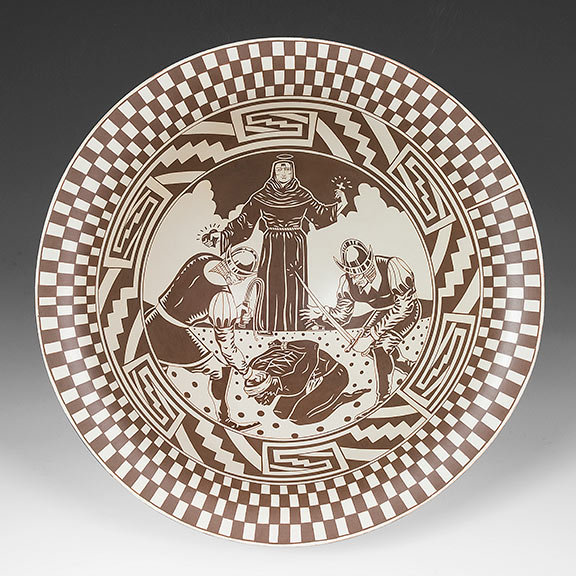 In the large bowl titled Saints and Sinners a Pueblo man has been stripped naked and is being brutalized by the Spanish conquerors.  The figure of Junipero Serra, bearing a cross and a heart looks on, dominating the scene as in the drawing and print.  As an artist, Diego Romero refuses to allow others to dictate where he may find inspiration for his work.  Although he often draws from Pueblo history, his work reflects the influence of Greek mythology, Mimbres designs, comic book art, and mainstream American and European art. 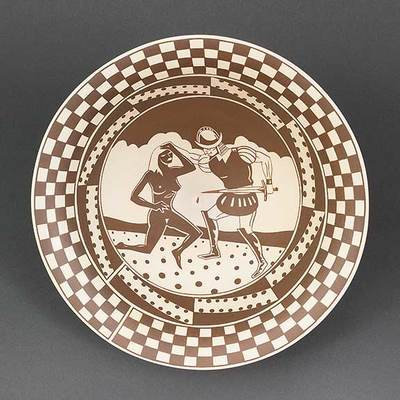 Rape of Gaia uses imagery from the left side of the drawing and print.  A naked Pueblo woman has just been run through by the sword of a conquistador.  The weapon drips blood.  Although the incident is clearly set in the American Southwest, the title of the piece references something more universal.  In Greek Mythology, Gaia is the personification of Earth.  As one of the primordial gods, she is the mother of all life on the planet.  From her sprang the Ourea (the mountains), Uranus (the sky), Pontus (the sea), and the Titans, parents of a number of the Olympian gods.  The artist is not only referring to the rape of Native women by the Spanish, but also the despoilment of the Earth by humankind. 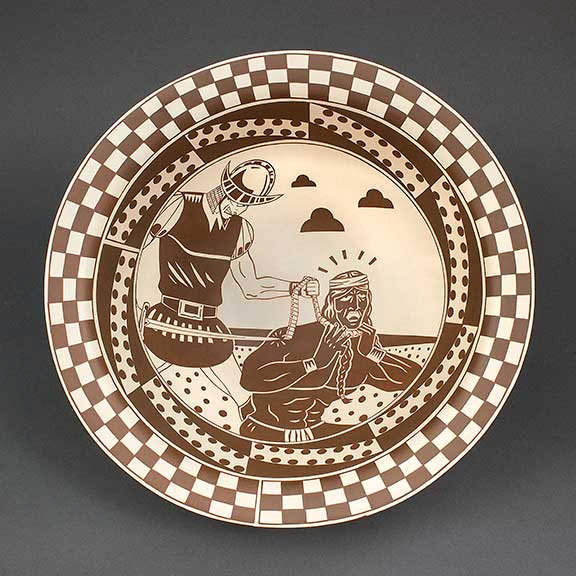 The imagery for Death of the Turk is taken from the right side of the drawing and print.  Using a rope, a conquistador strangles a Pueblo man.  At first, the word Turk seems out of place in such a scene.  However, the artist is referencing an event in Pueblo history

When Francisco Vázquez de Coronado and his army traveled north from Mexico City to Tierra Nueva in search of the fabled Seven Cities of Gold, which they called Cíbola, they eventually came to what is today known as Pecos Pueblo.  Spanish chroniclers recorded that the Native name for the pueblo sounded like Cicuyé and that the Towa speaking people of Jémez Pueblo called it something sounding like Pecush.  Consumed with their desire to find the Seven Cities, the Spanish pressed the leaders of Pecos for information about them and were told that they lay far to the east.  In an effort to get the Spanish to leave, Coronado was given a captive from one of the Plains tribes to guide him to the buffalo lands farther to the east.  To the Spanish, this man looked Turkish, perhaps because of the headdress he wore which may have resembled a turban, and so he came to be called El Turco (the Turk).   Using tales of gold as bait, El Turco lured the Spaniards all the way to the Great Plains.  Wandering as far as present-day Kansas and finding no gold, Coronado became suspicious.  Under interrogation, the guide finally revealed that his true mission had been to force the Spanish to roam the plains until they gave up or died.  Shortly thereafter the man was strangled.  Melchor Pérez, who was part of Francisco Vázquez de Coronado’s expedition, recorded that one of the Spanish soldiers “from behind put a rope around El Turco’s neck, twisted it with a garrote, and choked him to death.”  After two years, with little to show for their adventure, Coronado and his army returned to Mexico City in 1542.

Although he is best known as a ceramic artist, Diego Romero works in a variety of media, including drawings and prints.  Usually, the drawings are studies for his spectacular bowls, the form Romero most often employs to express his ideas.  Sometimes, as with Saints and Sinners, the drawings are used as the basis for a print as well as for one or more ceramic pieces.

A range of influences have shaped Diego Romero’s graphic style – Mimbres and Greek ceramics and comic book art.  His subject matter is even more diverse: Greek mythology; modern superheroes, particularly Wonder Woman; TV and pop culture such as Teenage Mutant Ninja Turtles and The Simpsons; Maurice Sendak’s Where the Wild Things Are; the work of Édouard Manet, Roy Lichtenstein, Andy Warhol, Keith Haring, and Claes Oldenburg; old movies; social and environmental issues, and, of course, the Pueblo Revolt, a theme the artist has returned to time and again.  Some of Romero’s pieces are satiric, some simply humorous, and a number are erotic and even homoerotic.  Diego Romero’s imagery is always startling and unexpected, drawing the viewer in to consider often controversial subject matter as in the artist’s Saints and Sinners series.