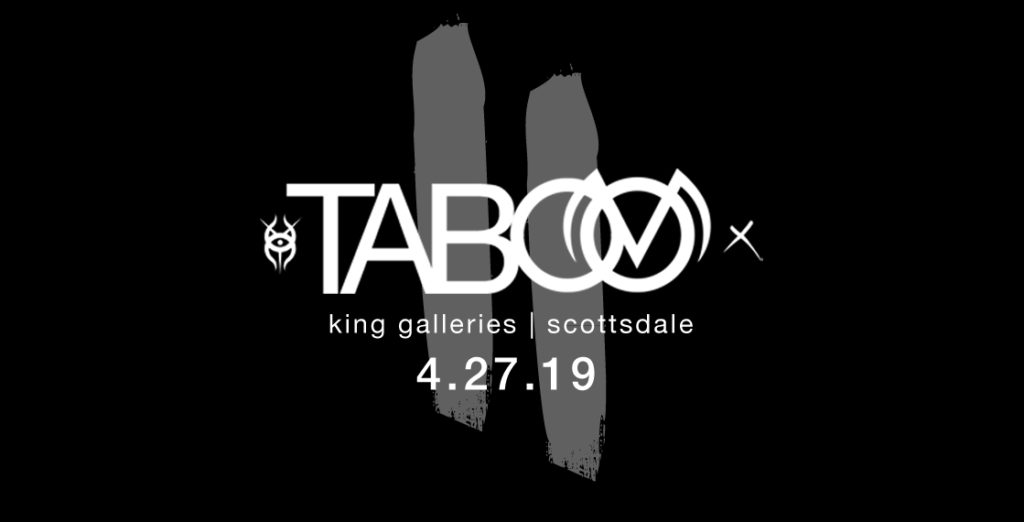 In 2017, Virgil Ortiz conceptualized his first show of Taboo.  It was a unique opportunity for him to engage the unacceptable or forbidden through his work in clay.  The success of the show reflected not only his creativity but spoke to people in a way that allowed them to explore their own feelings about these issues.  Two years later Ortiz is returning to these sensitive subjects in Taboo II.   His new work is intended to inspire dialogues concerning the difficulties and challenges faced by communities around the world and provide awareness and provoke positive change.

These are the topics we avoid in polite conversation, to that which society prescribes as outside its current social, sexual, cultural or political mores.  Many actions or even social groups, which were once considered “taboo”, are now part of the mainstream.  When does that which is forbidden become that which is acceptable?

Ortiz has spent a career engaging challenging themes through his provocative pottery figures and vessels.  He continues a century of Cochiti Pueblo potters using their clay art as a means for social commentary.  Ortiz is redefining Native art through his artistry.  His new works in Taboo II are both beautiful and at times a bit unnerving.  That’s just the way he likes it.  He challenges the viewer to take in the complexity of design and form, while simultaneously processing the content.  It may all be a bit taboo for Native art, but what is “cutting edge” today will certainly be the standard of tomorrow. 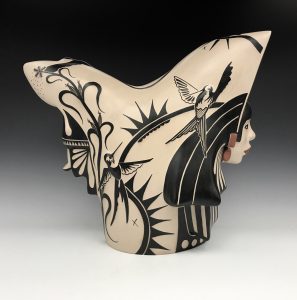 “MMIWG are the Missing and Murdered Indigenous Women and Girls.  There is an innate difficulty to grapple with the extent and impact of these missing and murdered American Indian and Alaska Native women and girls.  At a rate of 15 missing each day, they are rarely accounted for in federal statistics. The impact ranges from reservations to urban communities. This piece was created to bring awareness to this epidemic. The spirits of these missing women and girls need guidance to the next life – many of them have not been given a proper burial and send-off.  The hummingbirds, or “Miiich” in the Keres language, serve as guides and protectors for these lost mothers, sisters, daughters, aunts and loved ones so that they are able to return home.” -Virgil Ortiz This piece speaks to the internal conflicts of those living with PTSD.  For this sculpture, I honed in on my recent experience of using art to encourage Veterans with PTSD to share their stories and establish a new sense of self through healing.  PTSD is not limited to those who have been deployed but can impact anyone as the result of a traumatic experience or encounter.  The dramatic converging faces depict the internal battle of those who have PTSD.  Their daily experience can be a duality of a suppressed painful past and the attempt to find normality in daily life. The three-pointed star and the three circles represent the infinite quest for stability and balance in their thoughts and lives. On the back, I painted Rorschach inspired silhouetted images of Vets to bring balance and overall symmetry to the form and design.  The silhouettes speak to the proudest moments of Vets serving our county yet experiencing depression being away from their loved ones.”  Virgil Ortiz “Dogs.  We dress them up, we take them out on parade, we lavish them with gifts.  For many, that’s not enough and they want to enter the world of dogs themselves.  Sure, Puppy Play looks like a kink, with the leather and hoods and tails.  But it’s a world scene created by men and women and it’s one that is not about control but about love and affection. It seeks to show a way to navigate our lives away from the ordinary into the unknown.  It may seem silly to wear a tail and ears, but is it any sillier to dress up our dogs in a dress, tiara, and shoes?” – Virgil Ortiz 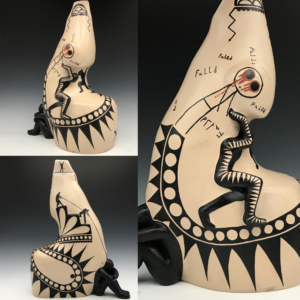 “Growing up and living with ADD, dyslexia, Aspergers, or autism is an unimaginable personal and social challenge.  During my time at Colorado College, I had the opportunity to learn from 15-year-old Foster what it’s like to live with these disorders.  As a kid, he thought he was a failure.  He showed me one of his own drawings which expressed how he felt about his failures. He saw himself as an extended figure, surrounded by the words, “falld”, meaning “failed”.  This was an intense expression of his personal feelings and perception.  He felt he had to pull himself up every day, so I put him at the top of the mountain, the apex of this piece.  He loves to mountain climb, so that seemed appropriate.  The other figures are carrying the weight of the world on their shoulders and at the same time, getting ready to toss Foster’s “drawing” away as he overcomes his feelings of failure to achieve personal success.  I see him standing tall, beginning to enter a place of non-duality where the understanding of his neurodiversity can have its own meaning outside and separate of how and what it means to others.” Virgil Ortiz Hate is a Drag

“Sometimes we stand alone.  Sometimes as a group. Gender roles and society often challenge the how we see ourselves and are perceived. I wanted to depict a man getting dressed for drag along with the three fierce drag queens.  To me it’s never about race, sex,  or gender but I just see people as people. Yeah, Hate is a Drag.” –  Virgil Ortiz