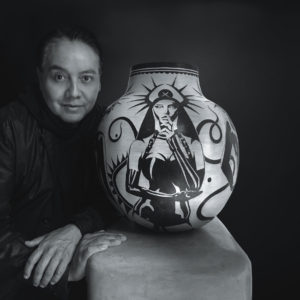 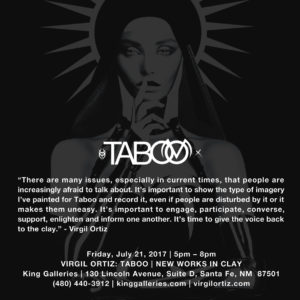 “Creativity comes to me from continuing the story of my Cochiti people and how we see the world around us.  Our art from the late 1800’s told the stories of what those people were experiencing at that time.  That opened the door for me to use Taboo topics to engage people about today’s society, culture, politics, religion and even social media.  There are so many issues that people are increasingly afraid to talk about.  It’s important to show the type of imagery I’ve painted for “Taboo” and record it, even if people are afraid of it or it makes them uncomfortable.  I want to demonstrate that Native artists can innovate while using traditional methods.  We don’t have to be pigeonholed by those who want the same piece of pottery over and over again.  It’s time to give the voice back to the clay.”   Virgil Ortiz

Taboo is the concept of the unacceptable or forbidden.  It ranges from topics we avoid in polite conversation, to that which society proscribes as outside its current social, sexual, cultural or political mores.  Many actions or even social groups, which were once considered “taboo”, are now part of the mainstream.  When does that which is forbidden become that which is acceptable?

Virgil Ortiz has spent a career engaging challenging themes through his provocative pottery figures and vessels.  He continues a century of Cochiti Pueblo potters using their clay art as means for social commentary.  Virgil is redefining Native art through his artistry.  His new works in “Taboo” are both beautiful and at times a bit unnerving.  That’s just the way he likes it.  He challenges the viewer to take in the complexity of design and form, while simultaneously processing the content.  It may all be a bit Taboo for Native art, but what is “cutting edge” today will certainly be the standard of tomorrow. 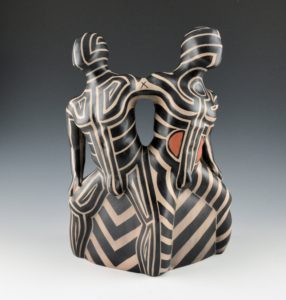 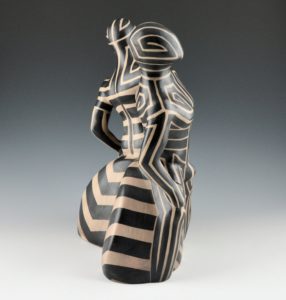 “It’s not all black or white, passion or pain, male or female.  I painted this double figure with one side appearing darker and the other lighter.  Symbolically, it represents the irrelevancy of the skin color of any person.  More importantly, the figures are a couple, joined together yet seemingly pulled apart. While they are male, the gender here is unimportant.  The key is that they are holding on to each other, fighting to be accepted. I wanted to create the feelings of passion, struggle, acceptance, love, unity, and eternity.  For the faces, they are wearing “helmets”, so there are no expressions.  The statement of this figure is about what we are, not just who we are.  About our struggles to find love, to join with another person and at times, take on the world, together.” Virgil Ortiz 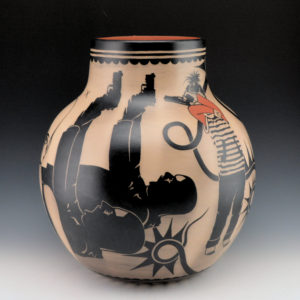 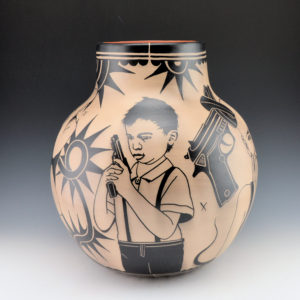 “We play with them as kids and fight with them in war. The toy becomes a weapon in the hands of a child. The weapon of war and peace becomes a tool of violence and oppression in the wrong hands.  We use them to punish ourselves and others.  Too often it is women and children who are found at the wrong end of the barrel.  The lonely and desperate seek a sad solace in a bullet.  Attention.  Prevention. A lock. A key. Therapy. Let’s keep everyone whole and alive.”  Virgil Ortiz 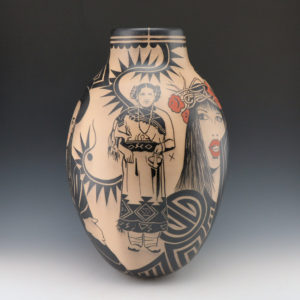 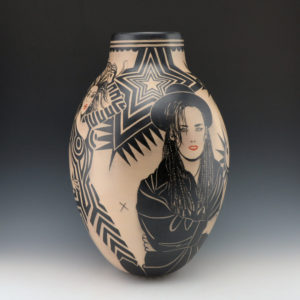 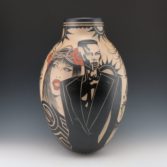 “The Zuni “princess” We’wha (WAY-wah; b.1849), as the local media dubbed her, was an instant celebrity. She boldly stepped forward in the late 1800s as the embodiment of the two-spirit, an individual who combined male and female traits into a socially-recognized third gender role. As much as she mesmerized Eastern American society, she also characterized the strength of her role in her tribal community. Natives often considered two-spirit people to be among the strongest and most intelligent. Today’s transgender issues and controversy find inspiration in the life of We’wha, and also a voice in pop culture through musical icons like Boy George, Pete Burns, Ru Paul, Grace Jones and others who are shaping and pushing forward the agenda of the LGBT rights movement.” Virgil Ortiz

Nature of the Beast 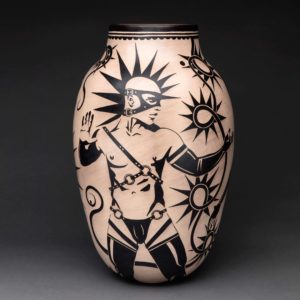 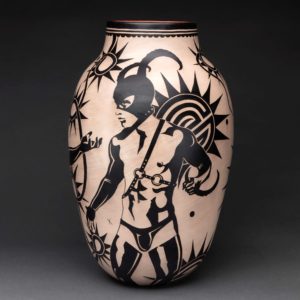 “It’s not the world in which we live our daily lives, but the unseen, underground world where people live out their fantasies that has power.  Forbidden desires and fantasies are woven into the leather straps, vinyl and bondage imagery on this jar.  Just like the men on the jar preparing to ‘wrestle’, we each wrestle with our human nature.  That’s just the nature of the beast.”  Virgil Ortiz 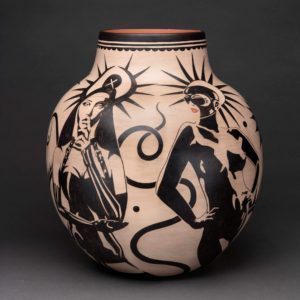 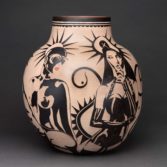 “As kids we were supposed to attend catechism classes and kept trying to run away.  I finally went to the class out of respect for my parents.  During one of the lessons a nun turned and hit me with a ruler for what seemed to be no apparent reason.  Today, I look back and think about the silence present in some religious leaders, who can often commit evil acts and go unpunished.  Like the figures on the jar, they hide behind masks of propriety but I hear a cacophony of voices asking to unmask them.”  Virgil Ortiz

Place in the Sun “Sexual themes are frequently taboo in many cultures.  I painted the lines to flow from figure to figure.  Symbolically, they reveal that whatever the method for self-gratification, the arc often runs from fulfillment to fear of discovery.  Only when that arc is broken can we each seek our own place in the sun.” Virgil Ortiz “Social media is obviously not taboo.  But, its obsessive vanity, that is the focus of this canteen.  In our rush to create the ‘perfect selfie’ for public consumption, we hide behind masks of our own creation and leave behind reality.  The back of the canteen reveals the ‘arm’ of the internet reaching out for us.  We perform and pose for those unseen, who silently watch and wait for us to post ever more revealing selfies.”  Virgil Ortiz “The taboo of how people are treated when they are diagnosed with cancer is something very close to me and my family.  The silhouette of this piece at first glance appears to be an exclamation point.  But I sculpted it so that it is also as if it is an MRI machine laid on its back. The figure is designed in a classic sculptural style with the arms cut off.  It strikes me that a person feels like their hands are tied when they first learn of a cancer diagnosis.  The painting on the body of the figure represents the endless journey to find a cure and the circles are the “mapping and markers” on the body. The figure has no hair, the impact of the chemotherapy.  I painted a blindfold to represent the lives taken and it is to be removed when in remission.  The center detail is the turkey track, the “x”.  I use this as a design on all my pottery, a symbol of staying a step ahead and not being followed.  That’s how I see us in relation to the cancer, trying to just keep a step ahead and become survivors with strength and triumph.”  Virgil Ortiz