Over the last fifty years, Cape Dorset has been the only Canadian Arctic community that has consistently been able to attract and maintain a large group of international collectors.  This is due to the support of the West Baffin Eskimo Co-operative, the marketing and promotion of Dorset Fine Arts and, most importantly, the willingness of the Cape Dorset artists and printers to embrace creative and technical innovation and experimentation.

Unlike other artists, Cape Dorset graphic artists work side by side at the Co-op rather than in isolation.  They help, inspire, and also influence each other.  Older artists often mentor younger ones.  In recent years the community has suffered the loss of a number of its senior artists, including Kananginak Pootoogook and Kenojuak Ashevak as well as the tragic murder of Annie Pootoogook.  Many have wondered if any of the younger artists will develop their artistic talents to the level of Kenojuak or Kananginak.  Fortunately, the work of a number of these artists has already caught the attention of collectors and curators.  Padloo Samayualie, Saimaiyu Akesuk, and Ooloosie Saila are among the most promising of the newer generation of Cape Dorset artists and bear watching. 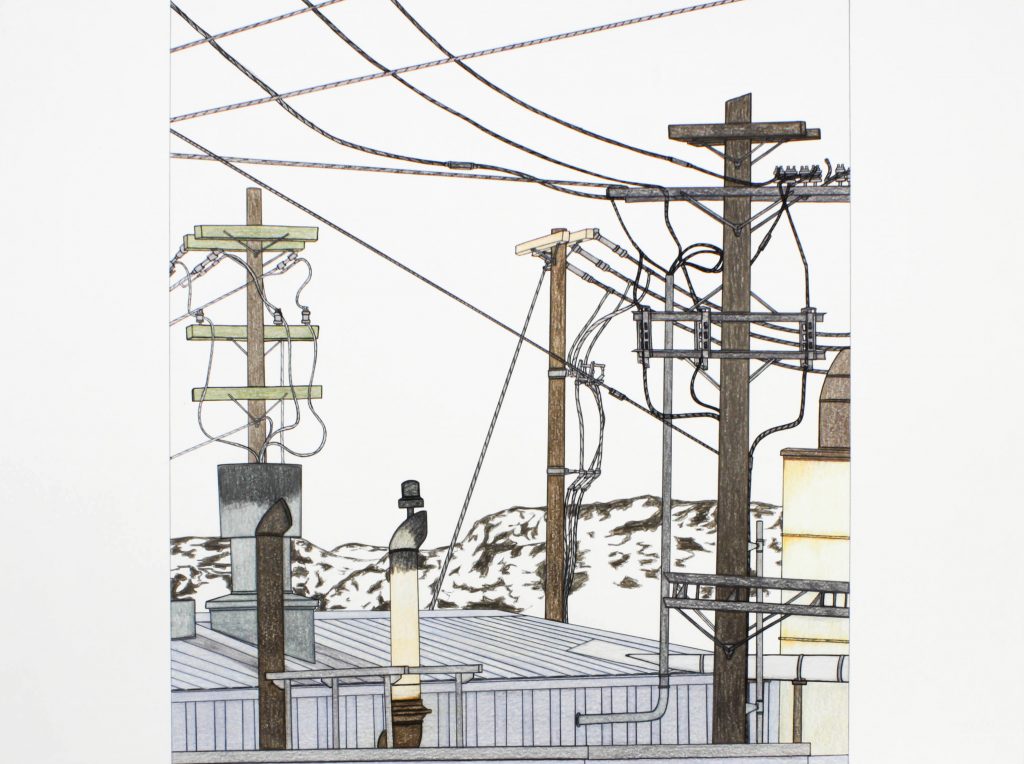 In a sense, Padloo Samayualie typifies contemporary Cape Dorset sensibilities.  Padloo, as gallerists, collectors, and curators usually refer to her, often produces images of her community and the landscape it is set in, but she is also curious about so much more, which is reflected in her art.  Padloo’s drawings of her home town and it’s surroundings examine local architecture and terrain.  These works combine an astonishing sense of color with an exploration of form and line.   This can clearly be seen in Nunavut Power Plant Here in Cape Dorset. 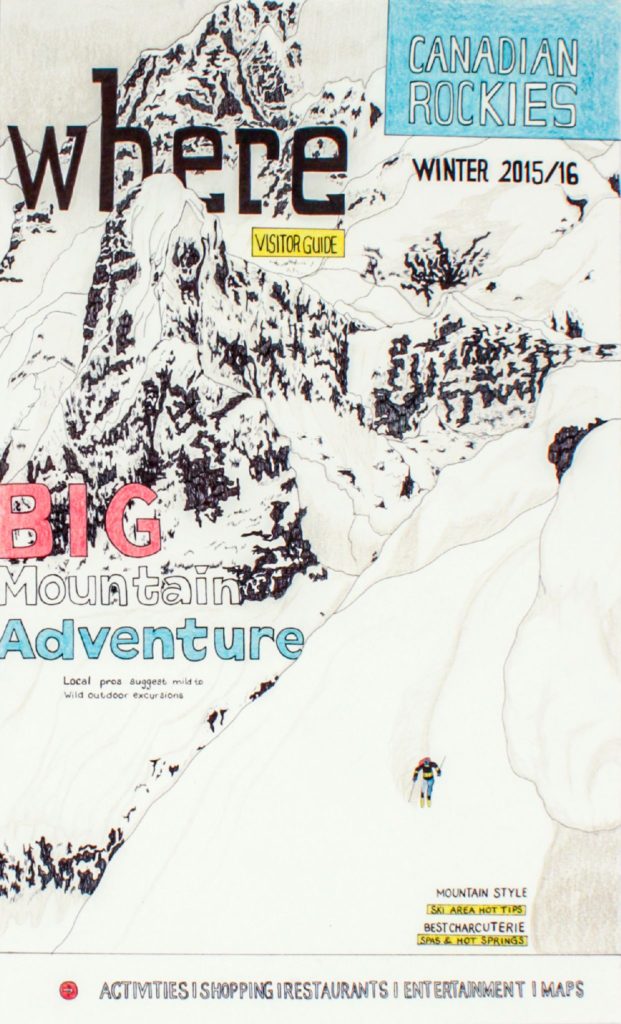 Padloo is also inspired by advertising, magazine covers, labels, and packaging for products such as Twizzlers and Maynards Juicy Squirts.  Composition (Big Mountain Adventure) and similar works reflect the artist’s interest in the world beyond Cape Dorset. 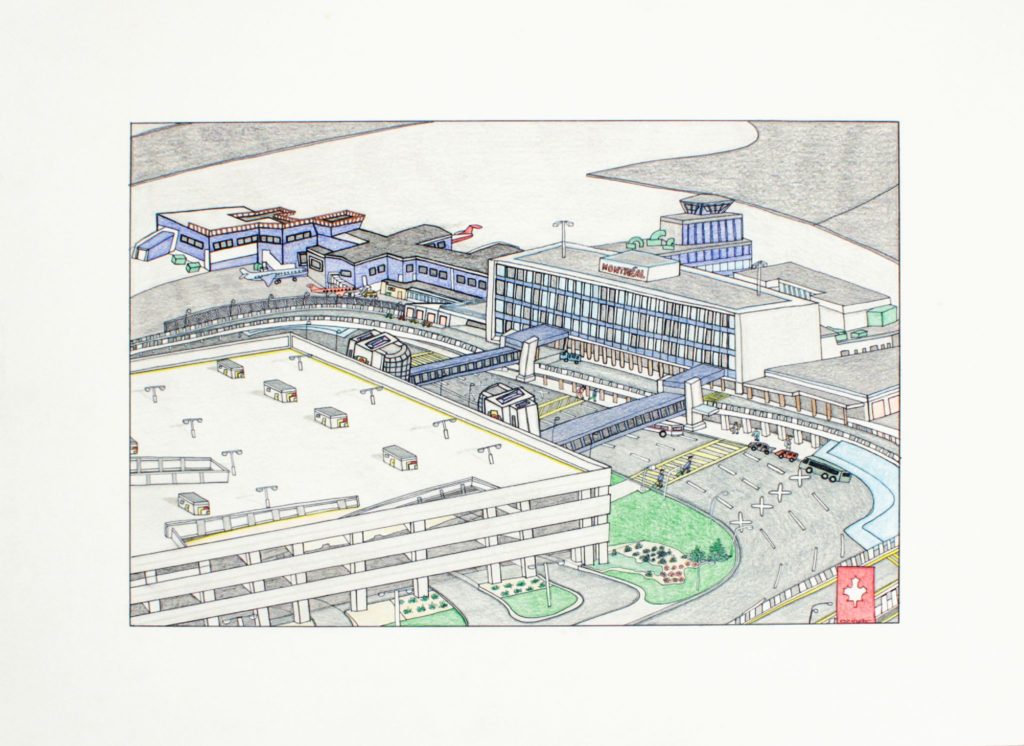 Although she resides in a small, geographically isolated hamlet located on Dorset Island in Arctic Canada, Padloo’s is not a life lived in isolation.  She has traveled far beyond Cape Dorset and works such as Composition (Montreal Airport) attest to this.  This drawing is filled with closely observed details and is evidence of the artist’s ever inquisitive mind.  The work is also an example of Padloo’s interest in architectural forms, something she would explore in detail during her time in New York City. 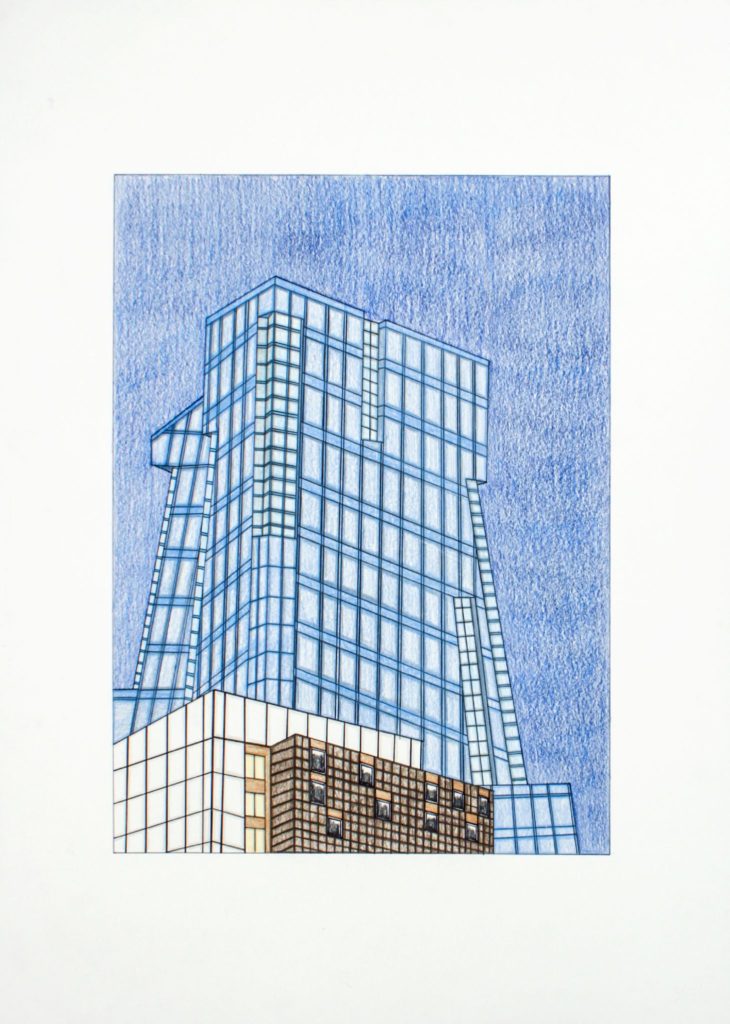 Many of Padloo’s drawings were prompted by her time spent in New York  in 2015 when she and fellow artist Papiara Tukiki inaugurated the first Cape Dorset Legacy Project, an annual creative residency, at the Brooklyn Museum.   I had the privilege of spending time with Padloo during her visit and I often noted how fascinated and a bit overwhelmed she was by the city.  She was particularly intrigued by the height and architectural diversity of the buildings.  The variety of shapes and geometric patterns held her attention and these were incorporated into her art.  When she returned to Cape Dorset, Padloo produced a large number of drawings inspired by the skyscrapers she saw as well as the many architectural elements she encountered.  Building in New York is just one example of Padloo’s interest in the architecture she encountered in Manhattan. Padloo also focused on unexpected details that she saw during her New York stay.  Pipes in New York is an illustration of her curiosity and her interest in form and line.  Plumbing is not something that would attract the attention of most people, much less that of an artist.  Yet, the geometry of the pipes clearly caught Padloo’s attention.  At forty-one years old Padloo Samayualie is making a name for herself as an artist who is creating striking, complex images. 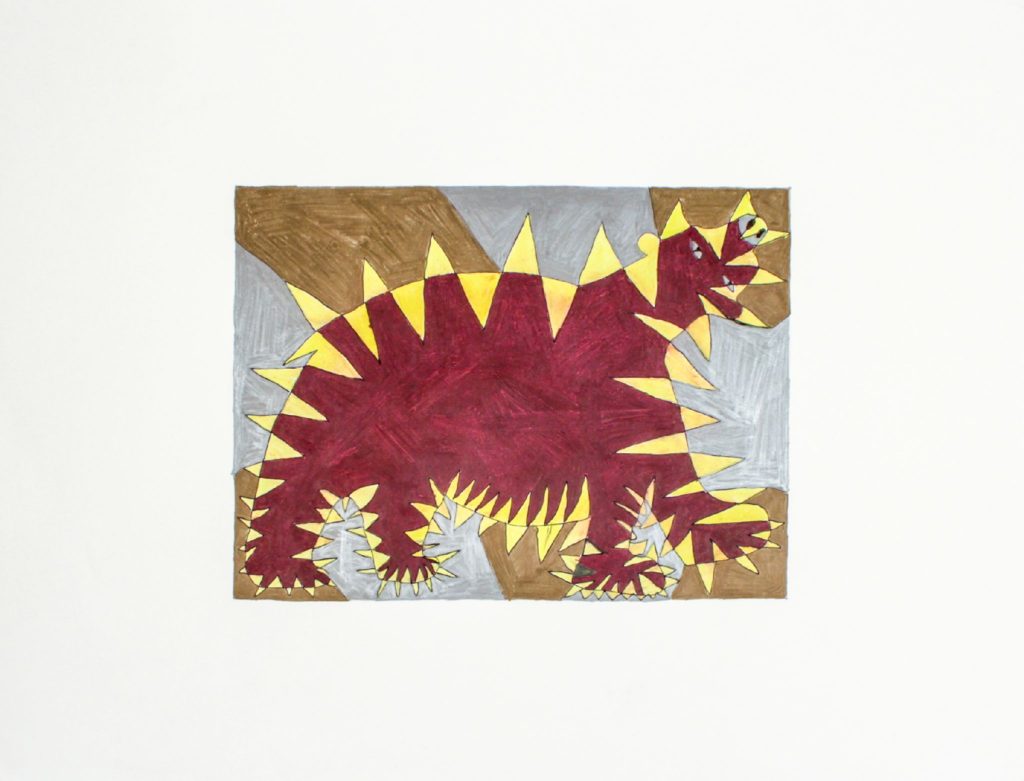 Saimaiyu Akesuk’s creative output is unlike that of any other Cape Dorset artist.  It is at once bizarre, surreal, and humorous.  Spikey Bear exemplifies the artist’s unique vision.  The bear Saimaiyu created displays little resemblance to any found it Nature.  The artist’s intention was not photorealistic representation.  Saimaiyu drew a creature that simply uses the actual animal as a starting point.  From there, she let her imagination run riot, giving her bear red fur and golden spikes, and placing it against a background of wide brown and gray streaks. 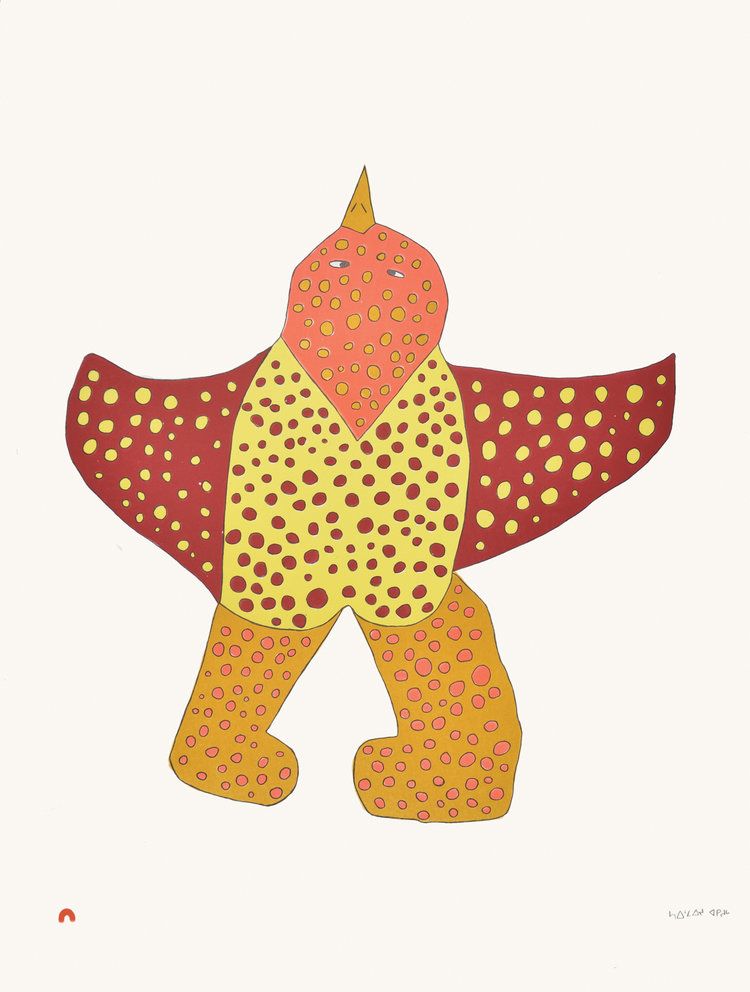 Saimaiyu, as she is known to most who admire her work, often creates light-hearted images of birds that bear little resemblance to reality.  Every one of these creations is unique, but each exudes the same wonderful sense of joyfulness.  Exuberant Spirit is one of these birds.  Following the Inuit graphic tradition of placing one iconic image on the page, Saimaiyu has created a wonderful lithograph using four colors for the bird’s body – orange, red, yellow, and ochre – and then covering it with vibrant, complimentary dots. 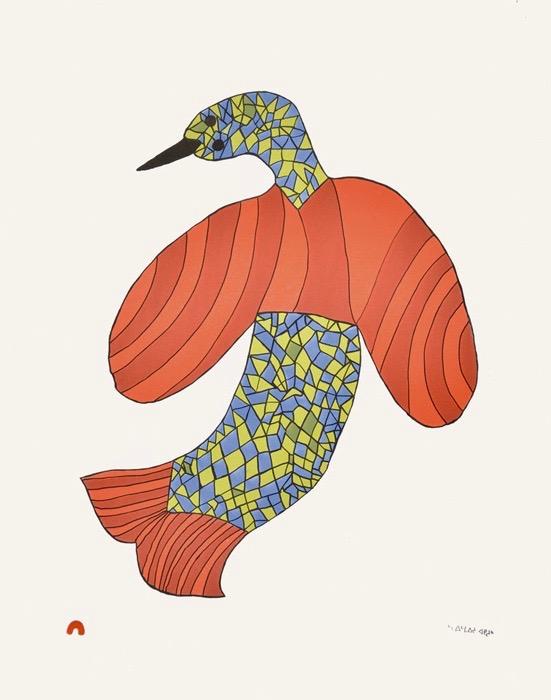 Transfiguration is an unusual title for an Inuit work.  Considering the subject matter of the piece, transformation is a word that most collectors would expect.  However, the bird in this lithograph is not changing into a human or another animal.  As the title indicates, the bird is undergoing a complete metamorphosis into a more beautiful, radiant state.  The title also suggests a spiritual component to the print. 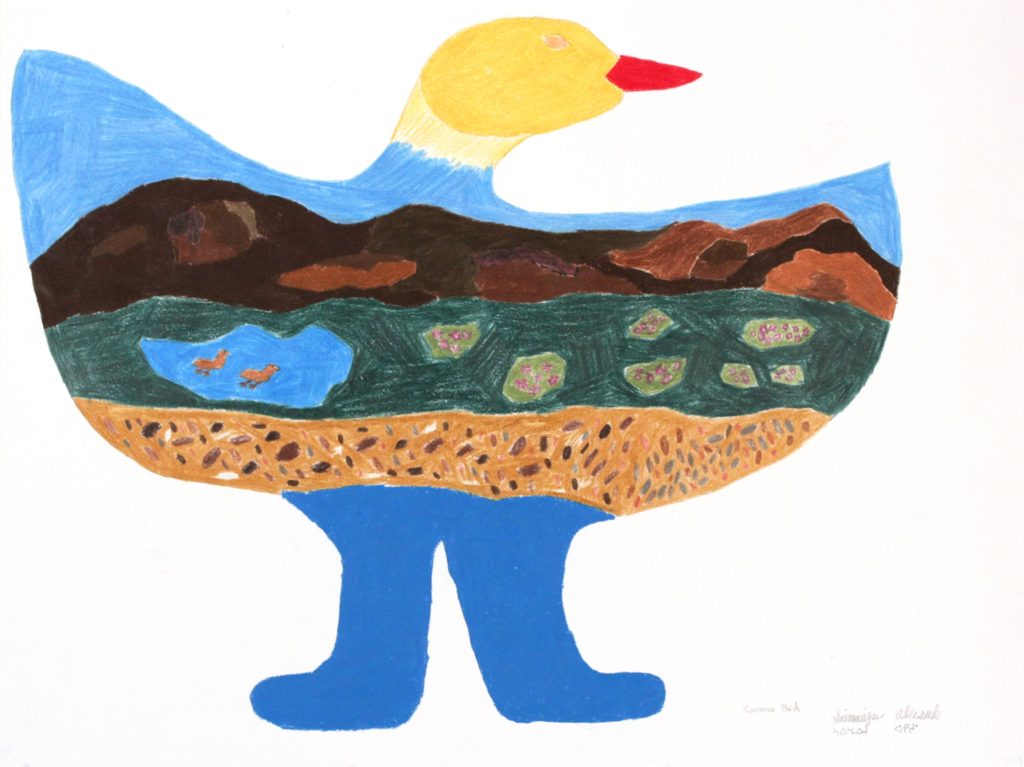 In Summer Bird Saimaiyu takes the concept of the title and makes it literal.  The bird she has drawn exemplifies summer in the Arctic.  Looking at this drawing the viewer can’t help but sense the warmth of the summer and all the good things it brings with it.  This is especially true in the Arctic where the season is brief, but filled with life.  The ice melts and the land blooms with grasses and flowers and millions of animals, particularly birds, migrate to the North to breed and raise their young before moving south again.  Summer is a time of plenty in the Arctic. One of her most delightful creations, Untitled (Blue Birds) features images of birds that the artist used in many of her other works, but in this drawing they are all rendered in shades of blue.  The choice of color gives Untitled (Blue Birds) a calm quality,  Yet the use of so many different bird shapes depicted all over the page also creates a sense of chaos, setting up an interesting tension in the piece. 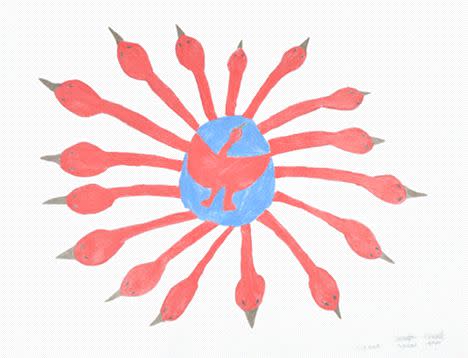 Birds are frequent subjects for Saimaiyu Akesuk as they were for Kenojuak Ashevak.  Yet, of all Saimaiyu’s work, Bird Heads is the most reminiscent of Kenojuak’s art, in particular Raven’s Entwined (see below), and it may be an homage to the deceased artist who had such a profound influence on the the artistic output of Cape Dorset Like Kenojuak, Saimaiyu is noted for her bold use of color and imaginative imagery.  Though she is only thirty years old, Saimaiyu is already at the forefront of contemporary Inuit art. 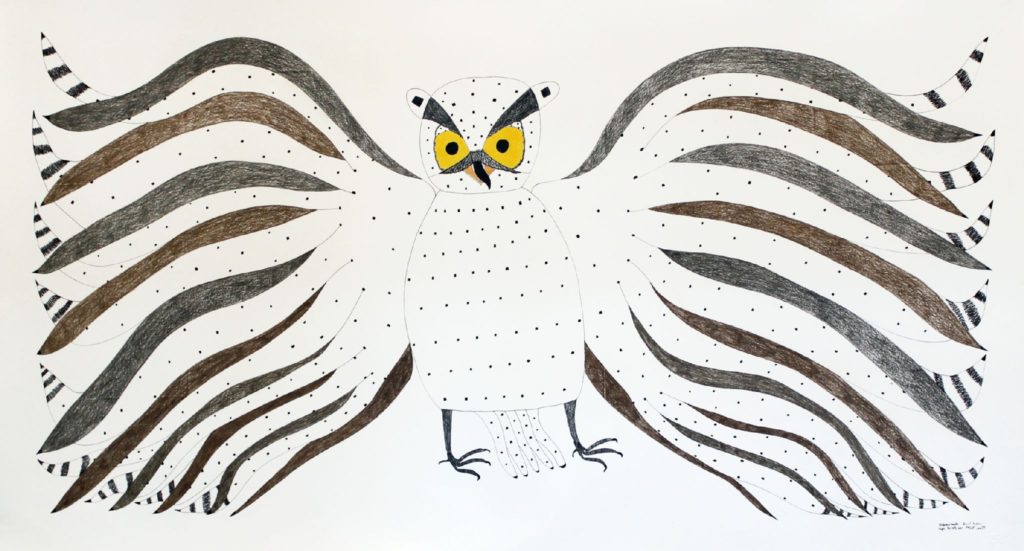 At 27 years old, Ooloosie Saila is one of the youngest artists in Cape Dorset.   She started selling her drawings to the the West Baffin Eskimo Co-operative (the Co-op) in 2015 and very quickly caught the attention of gallerists, collectors, and curators.  Among her most interesting works are somewhat fantastic images of birds and nonrealistic landscapes.

Open Wings is a striking work reminiscent of prints and drawings produced by Kenojuak Ashevak.  In fact, Ooloosie Saila may have intended her creation to be a sort of homage to the legendary artist.  Ooloosie has stated that she was inspired to draw because, as a child, she visited Kenojuak’s home where she watched her draw.  Like Kenojuak Ashevak’s fantastical birds, Open Wings is about happiness – the sheer joy of living.  Life and movement are suggested by the use of flowing, sensuous lines.  The owl’s bright yellow eyes, outspread wings, and somewhat silly expression are sure to bring a smile to the face of any viewer.  Clearly, the image is not intended to be a realistic representation but, instead, is rendered as a phantasmagorical creature much as Kenojuak did with her birds.  The owl’s feathers, delineated in black, brown, and white with black dots are more striking because the image dominates the page.

Ooloosie’s landscapes, created on a large scale, are very special drawings.  They clearly represent the Arctic terrain, but are not rigidly realistic and explore varying degrees of abstraction.  Composition (Landscape with Snowfall) presents the viewer with boulders in the foreground that are covered with multicolored patterns.  At first glance, these rocks appear to have been collaged onto the piece, but were created by the application of heavy pressure on the colored pencils used to draw them.  The drawing also has streaks of blue across it, forming water, snowy landscape, and sky with clouds.

In Landscape, Ooloosie takes her exploration of abstraction a step further.  The massive rocks covered with colorful patterns have been relegated to the background while the foreground is dominated by three streaks of color – purplish white, blue, and white.  The cloud filled sky anchors the work in representation.  Without it, Landscape would be purely abstract.

Padloo Samayualie, Saimaiyu Akesuk, Ooloosie Saila and a few other younger Cape Dorset artists have come to be called the Fourth Generation, sometimes also referred to as the Fourth Wave.  In the 1950’s when the first generation of modern Inuit artists were given paper they wondered what they should draw.  They were told, “Whatever comes to mind,” or insumanivi.  Cape Dorset’s Fourth Wave of graphic artists have all put their “thoughts” on paper, each one employing distinct a visual style, continuing what earlier generations had begun.  There work has already engendered excitement and interest on the part of gallerists, collectors, and curators.

The author would like to thank Pat Feheley, Feheley Fine Arts, Toronto and Charles Froelick, Froelick Gallery, Portland, OR for graciously supplying images for this article.