Santa Fe is so enchanting that many visitors never venture beyond it.  Rich in history, culture and cuisines, the City Different has much to offer.  However, venturing outside Santa Fe adds depth and richness to any visit.  Over the years, I have traveled to historic and archaeological sites as well as parks noted for their natural beauty that are an easy drive from Santa Fe.  One place that encompasses all of these aspects is Pecos National Historical Park.  It is one of my favorite side trips from Santa Fe and one that I hadn’t visited in quite a number of years.  While attending the Santa Fe Indian Market in 2018, I decided that it was time to return to Pecos.

The history of Pecos Pueblo is well presented in the park’s visitor center via large, illustrated panels.  One thousand years of history from the pit dwellers, the rise of the pueblos, the arrival of the Spanish and the Mexicans and later the Americans is essential in understanding the importance of this pueblo.  There is also an excellent exhibit of pottery and artifacts excavated at the site.  Finally, the trail guide is indispensable to understanding life as it was lived at Pecos.  Be sure to borrow one.

Examples of pottery on display at the Visitors Center, Pecos National Historical Park.

The story of Pecos begins sometime around A. D. 800 when humans first began to arrive in the Pecos Valley.  Living in pit housing and practicing farming, they remained in the area for 200 years and then left, though no one knows exactly why.  Within the next one hundred to two hundred years Ancestral Puebloans settled in the region and by the 1300s inhabited twenty-four small villages spread throughout the valley.  However, within one generation all of the villages were inexplicably abandoned and the people migrated to Pecos.  No one is quite sure of the reason for this phenomenon.  This population shift may have freed up more land for farming or it may have been done for defensive purposes.   Whatever the reason, by 1450 Pecos Pueblo had a population of 2,000 and stood five stories high. 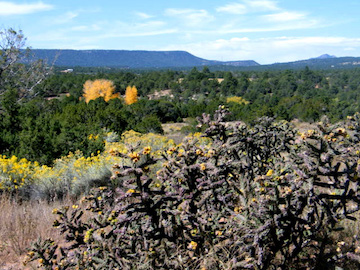 View of the Pecos Valley

Pecos Pueblo sits on top of a small mesa in the middle of a pass that cuts through the southern portion of the Sangre de Christo Mountains.  This location on the eastern frontier of the Pueblo world and the western end of the Great Plains afforded the pueblo many benefits, but it was also faced with threats from pueblos along the Rio Grande as well as attacks from the nomadic Plains tribes.  The abundant game in the area and a nearby creek allowed the pueblo to thrive.        However, despite hostile incursions into their territory the people of Pecos were able to survive through a combination of a strong defense and the formation of trade alliances.  The pueblo became a crossroad for goods and culture, functioning much like a city-state and acting as middleman between the pueblo farmers to the west and the hunting tribes of the Plains to the east.  Each year tribes from the Great Plains, in particular the Apaches, walked to Pecos to barter.  Setting up their tepees in the meadow below the pueblo, they prepared for long periods of trade, which sometime lasted weeks.  They offered buffalo meat and hides, tallow, flint, shells, and slaves.  In return they received corn and other crops, cotton clothing and blankets, pottery, obsidian, and turquoise as well as brightly colored parrot feathers traded up from Mexico.  One enigmatic group called the Teyas traveled all the way from the area that is now Texas to trade at Pecos.  However, they had an uneasy relationship with the pueblo.  In 1541 Pedro de Castañada wrote that the Teyas often visited Pecos during the winter months but that the inhabitants of the pueblo “do not dare to let them come inside, because they cannot trust them.  Although they are received as friends, and trade with them, they do not stay in the villages overnight, but outside. . . .”     Over time, Pecos became wealthy and powerful, remaining so for two and a half centuries.  However, with the arrival of the Spanish in the 1500s everything in the Pueblo world was forever be changed. 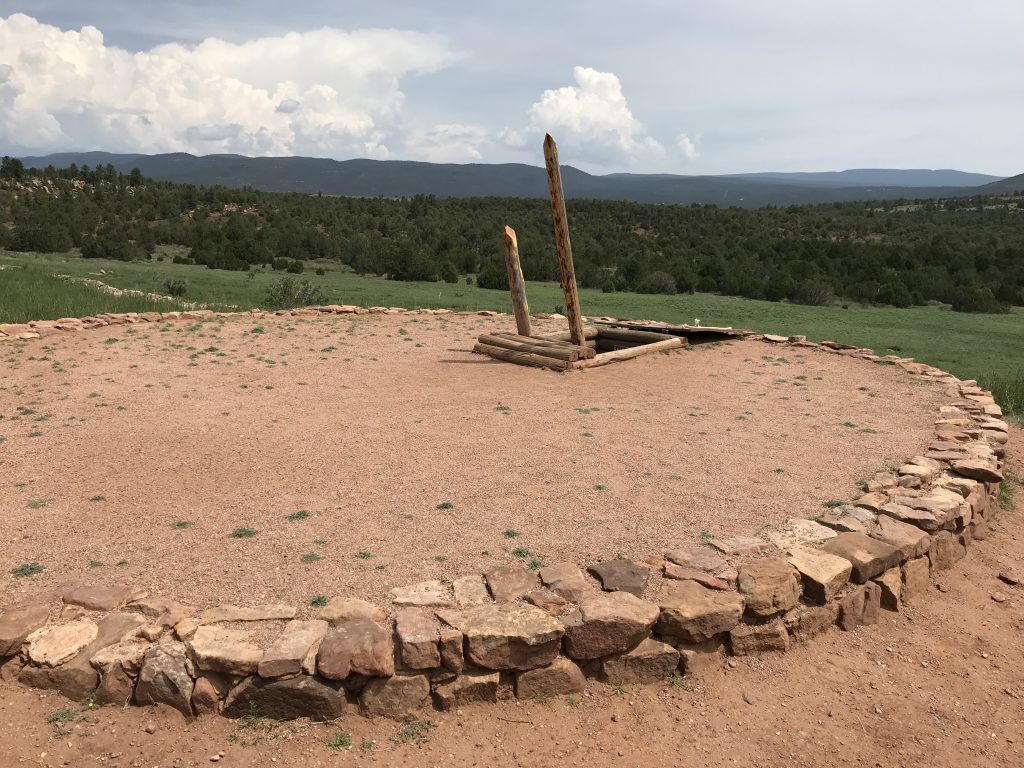 One of the Kivas at Pecos Pueblo.

Obsessed with the notion of the Seven Cities of Gold, In 1540 Francisco Vásquez de Coronado and 1,200 soldiers set out to find them, fueled by the often fanciful tales that had been related by Cabeza de Vaca who had wandered over much of northern New Spain.  The Spanish were lured on by the mistaken belief that, like Mexico, the lands to the north would also contain large quantities of gold.  By the time the Spaniards reached the pueblos of the Zuni they were starving.  Coronado ordered an attack on Háwikuh, the main pueblo, and simply took the villagers’ food stores.

Long before Coronado and his soldiers reached Pecos Pueblo its inhabitants had been informed of their powerful weapons and had sent out a peace delegation bearing buffalo robes as gifts and signs of friendship.  Fascinated by the robes, Coronado halted his army at Pecos the following spring.  During their stay Spanish chroniclers recorded that to them the Native name for the pueblo sounded like Cicuyé and that the Towa speaking people of Jémez Pueblo called it something sounding like Pecush.  Keres speakers also referred to the pueblo by a similar name.  Some believe that such words eventually became Pecos.  Others claim that the name is derived from payokona, a Pueblo word meaning “place where there is water.”

Consumed with their desire to find the Seven Cities of Gold, the Spanish pressed the leaders of Pecos for information about them and were told that they lay far to the east.  In an effort to get the Spanish to leave, Coronado was given a Plains Indian captive to guide him to the buffalo lands.  Wandering as far as Kansas and finding no gold, the guide finally revealed that his true mission had been to force the Spanish to roam the plains until they gave up or died.  Shortly thereafter the man was strangled.  Coronado and his army returned to Mexico City in 1542 after two years with little to show for their adventure.  For more than fifty years one Spanish expedition after another continued to pass through Pueblo lands, but it was not until 1598 that a group lead by Don Juan de Oñate arrived in the area with the intention of building a settlement.  Franciscan priests set about converting Pueblo people and conflicts arose among the Spanish as to whether the labor of the local people was owed to the Church or to the State. 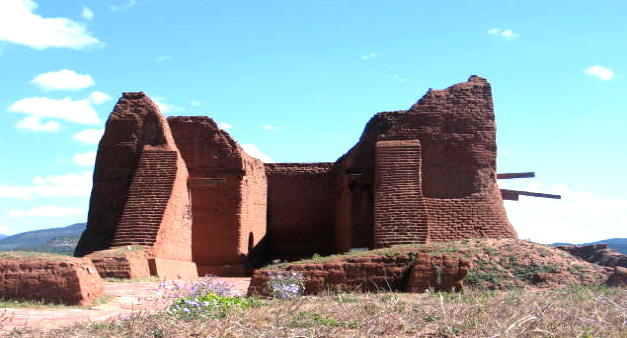 Now under Spanish control, the pueblo was designated the mission of Nuestra Señora de los Ángeles de Porciúncula and between 1617 and 1717 four successive churches were constructed at the site, the largest erected in 1625.  This church, stretching 150 feet from entrance to altar, was destroyed during the Pueblo Revolt of 1680 and was replaced by a somewhat smaller building built on its foundations. 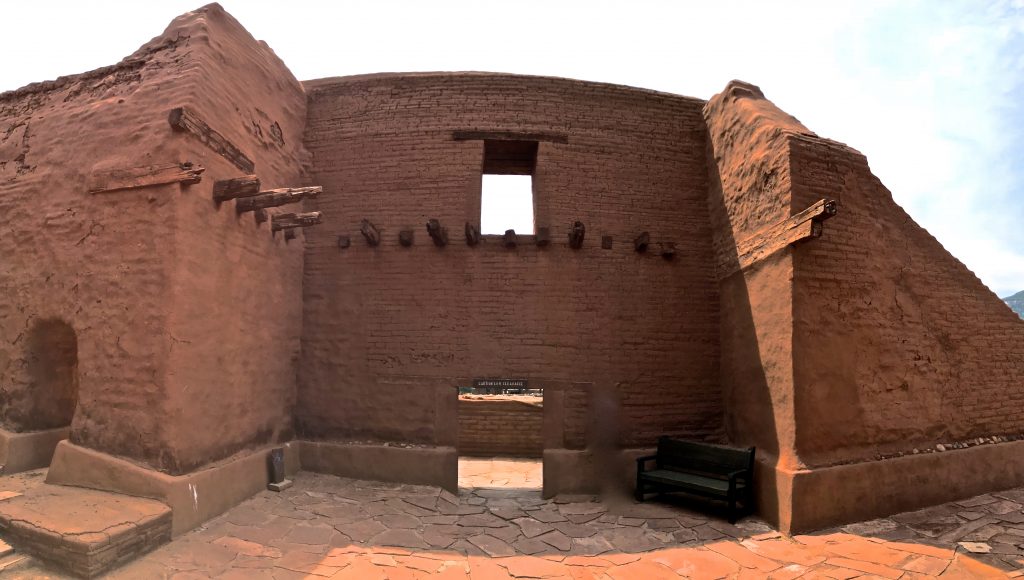 To Pueblo people the idea of worshipping in above ground structures was as foreign as the belief in one God who controlled all of creation.  At the pueblos ceremonials took place in underground kivas or in plazas open to the elements

and centered on keeping the forces of Nature in balance. 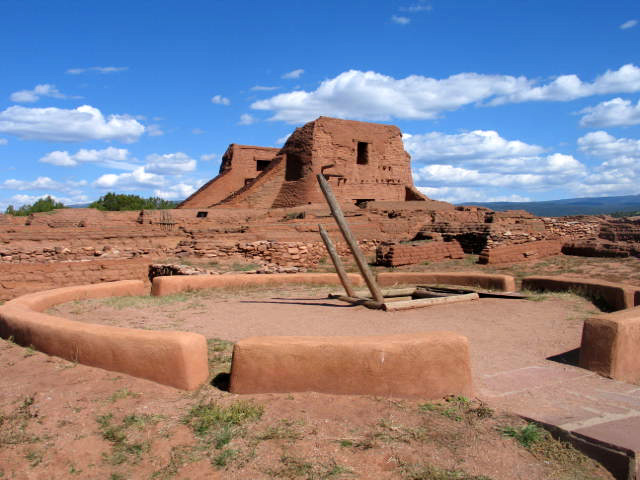 Ruins of the church, convento, and kiva at Pecos

One of the most fascinating aspects of Pecos is a kiva that lies very close to the convento, the area used by the Franciscans for living, teaching, and working.  According to Pueblo tradition the structure was built as an act of defiance in the late 1600s.  However, there is evidence that it was constructed shortly after the church had been completed.  Some archaeologists believe that the friars may have used this familiar setting to facilitate conversions, but this theory is controversial.  Since its earliest days, though, the Church has adopted non-Christian elements as its own (i.e. Germanic tree worship was transformed into the Christmas tree) and it has turned a blind eye to the blending of Catholic and Native traditions as can be seen in Guatemala and Brazil as well as in the use of kachina images to decorate the mission church at Zuni.

Ruins of the convento area at Pecos.

Not far from the kiva is the foundation of a D-shaped torréon, all that remains of a watchtower built during the mid-1700s to protect the mission from Comanche and Apache raids.  The mission settlements had disrupted delicate trade alliances and the Plains tribes, having obtained horses by various means from the Spanish, now attacked the pueblo since they could no longer obtain what they wanted through trade.  They also did this in retaliation for Spanish slave raids against their people. 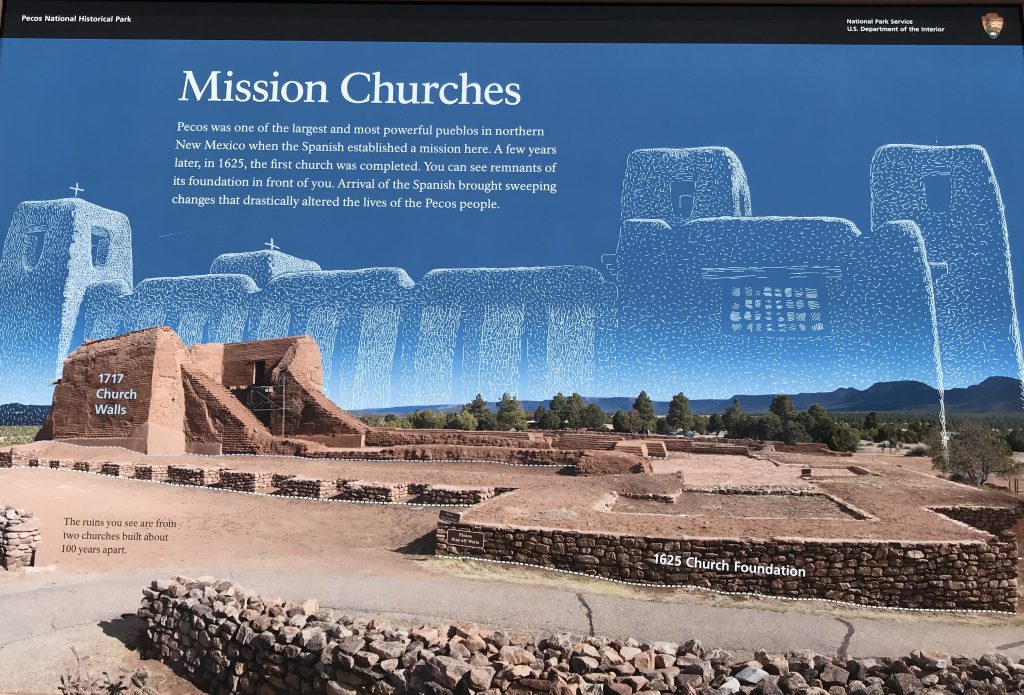 Pecos, which had flourished for so long, came to a tragic end.  The was further assailed by epidemics of smallpox and other diseases as well as severe droughts and famine in the 1660s and 1760s.  Continued divisions involving those loyal to the Spanish and those who wanted to return to traditional Pueblo ways may have also contributed to Pecos’ decline.  By 1838 the site was abandoned.  The last inhabitants, numbering less than thirty, migrated eighty miles east to Jémez Pueblo.

Like Abó, Gran Quivira, and Quarai, the pueblos of the Salinas Valley southeast of present-day Albuquerque, Pecos Pueblo had been a crossroad between the Great Plains and the Southwest and was eventually abandoned for the same reasons.  Pecos, as well as the three southern pueblos that now make up Salinas Pueblo Missions National Monument, were places where cultures not only clashed but also blended.

DIRECTIONS:  Although located 25 miles southeast of Santa Fé, in order to reach Pecos National Historical Park you must take I-25 north to exit 299, the Pecos-Glorieta interchange and go east on NM 50 to Pecos village.  Finally, turn right (south) onto NM 63 for 2 miles.

All photographs are by Jeff VanDyke.