Whenever I am confronted by the work of Sonya Kelliher-Combs I feel as if I’m on an artistic magical mystery tour.  I never know where I am being taken but the journey is always thrilling, filled with revelations, secrets, metaphors, portraits and original ideas.  Through her idiosyncratic imagery and use of unusual materials in unique ways and combinations, Kelliher-Combs forces us to reconsider such concepts as contemporary, Native, traditional, non-traditional and beauty as well as challenging our notions of what constitutes art.  As Edgar Degas wrote, “Art is not what you see but what you make others see.”  Ms. Kelliher-Combs’ art exemplifies this idea.  During the early years of my collecting I was unaware of Sonya Kelliher-Combs’ mysterious contemporary creations because I rigidly acquired only historic works, eschewing anything considered non-traditional.  The turning point was the first of the three groundbreaking “Changing Hands: Art Without Reservation” exhibits at the Museum of Arts and Design in Manhattan that introduced me to the work of scores of contemporary Native artists, setting my collecting on a new course.  Part 2 of the series, which opened in 2005, focused on work by artists from the regions west of the Mississippi River, including Alaska, Hawaii, and northwest Canada and introduced me to the art of Sonya Kelliher-Combs.  What “put me over the edge” in terms of my admiration for Ms. Kelliher-Combs was seeing “HIDE: Skin as Material and Metaphor” at the National Museum of the American Indian in Manhattan in 2010.  After seeing this amazing exhibition curated by Kathleen Ash-Milby, which included many pieces by the Sonya Kelliher-Combs, I was determined to acquire examples of the her work for my collection.  However, it was not until 2013 that I was finally able to connect with the artist. 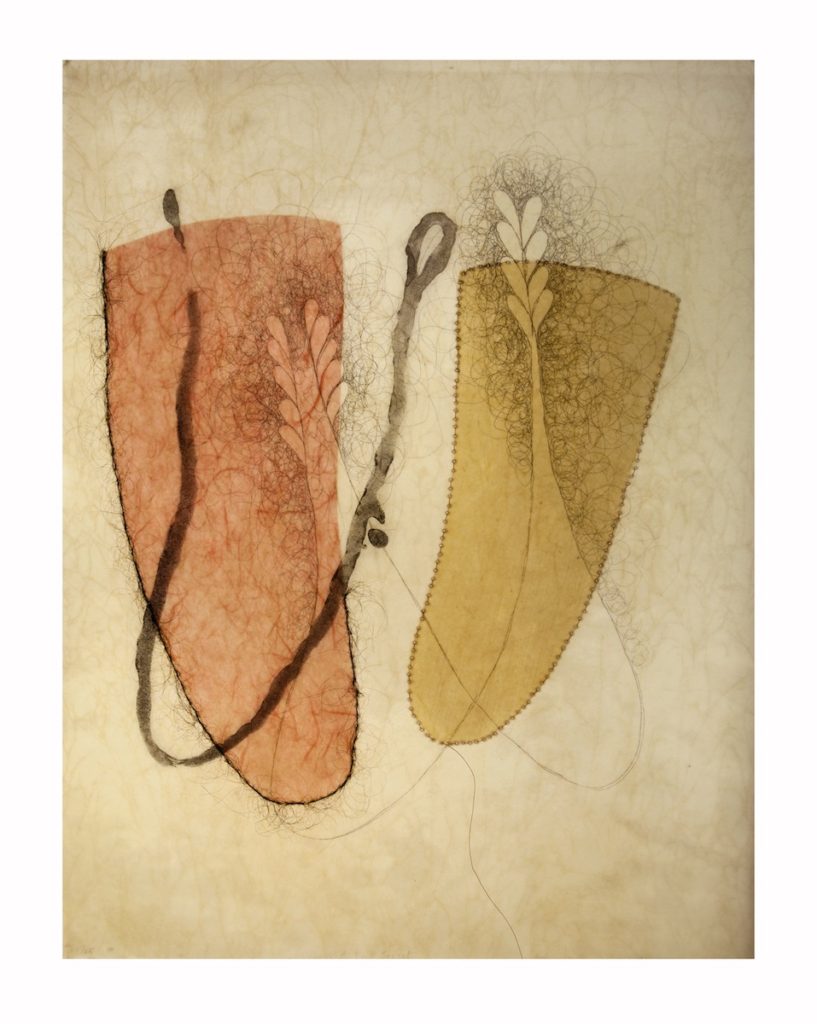 The first piece I acquired was a print titled Unraveled Pink Secret.  I had seen a photograph of it in an article in Native Peoples magazine so I assumed that the piece was perfectly flat.  However, when it arrived, I was greatly surprised because the print had a three dimensional element – hair and thread as well as beeswax – added to it, thus turning it into a mixed media work that could also be referred to as an assemblage or combine, forcing us to reconsider the boundaries and nature of printmaking. 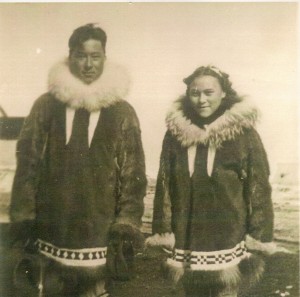 Although the imagery in Unraveled Pink Secret may simply appear to be phallic, the artist explained that these biomorphic forms were inspired by walrus tusks and represent the concept of generations.  These shapes also reference traditional Inupiaq clothing.  “. . . certain patterns adorning Alaska Native garments are linked to families and communities,” Kelliher-Combs stated.  “For generations, Inupiaq families have and still utilize this pattern on their garments.” 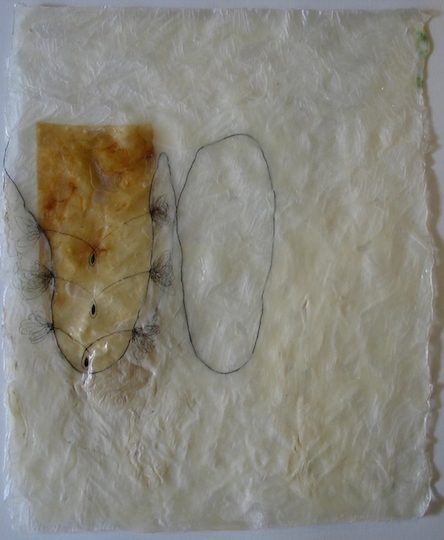 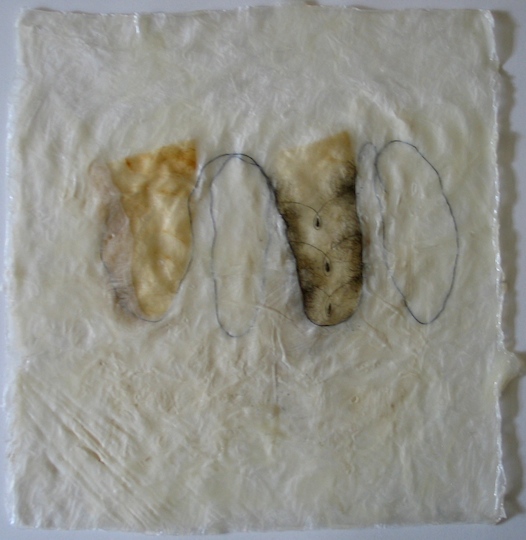 Being in contact with the artist has allowed me to acquire some of the most interesting and provocative examples of Kelliher-Combs work such as three pieces from her Unraveled Walrus Family Portraits Series, which were selected based on images seen on a computer.  Photographs of artworks rarely do the originals justice.  Subtleties cannot be seen and something, often undefinable, is “lost in translation” when one art form is filtered through another.  This is the case with so much of Sonya Kelliher-Combs work because it is so layered.  It is certainly true of her Unraveled Walrus Family Portraits in which various elements such as walrus stomach, sheep intestine, nylon thread, and archival ink, are embedded in multiple layers of acrylic polymer, creating the impression that they are preserved in ice.  Each piece is so mysterious that it creates the  feeling that the viewer is seeing a collective cultural consciousness frozen in time.  The objects “trapped” in the acrylic polymer subtly reference ancient Alaska Native garment-making traditions and the importance of females in their production.  However, this is not done in a stereotypically dainty fashion.  The diverse materials used by the artist are suggestive but extremely powerful.  The layering forces the viewer to consider not only what is being revealed but what might remain hidden. 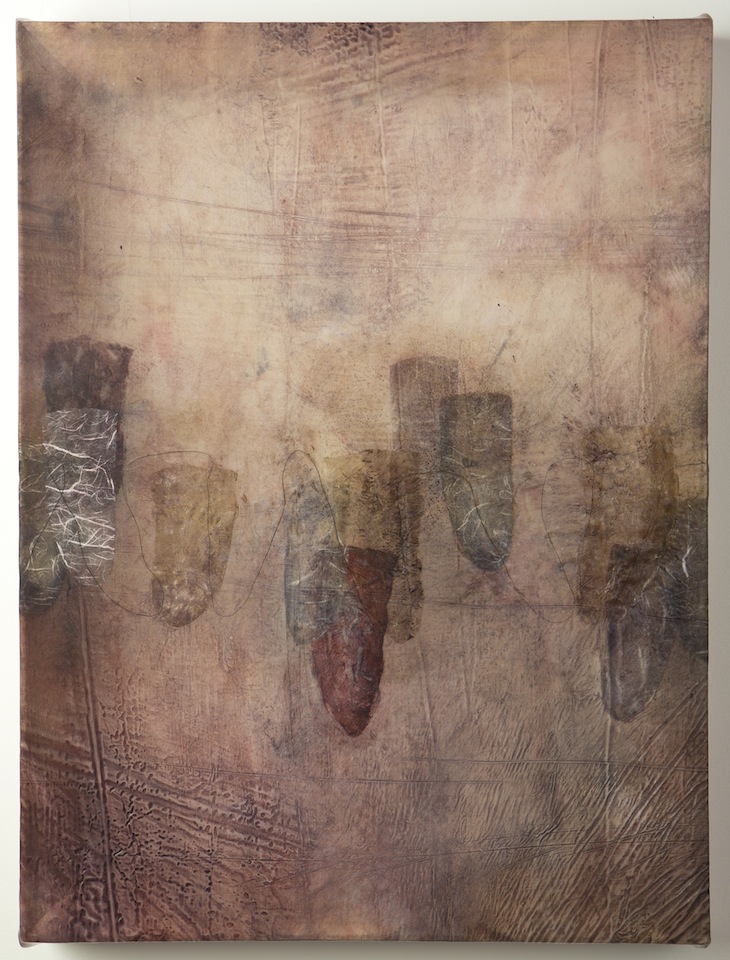 My goal of acquiring one of Ms. Kelliher-Combs’ large scale works was achieved with Plum Walrus Family Portrait.  Considered a mixed media painting, this work creates the illusion of skin through the use of multiple layers of acrylic polymer that have been stretched over a wooden frame.  The layering gives  Plum Walrus Family Portrait depth of color and shading while, at the same time, the piece seems lit by an inner glow, creating a mysterious somewhat mystical  tone.  The phallic tusk-inspired shapes, which appear to be suspended in space and time, are suggestive of brooding sexuality.  These forms are at once life- affirming and disturbing.  However, according to the artist, these same patterns have a feminine aspect if viewed as pouches, adding to the work’s sense of mystery. 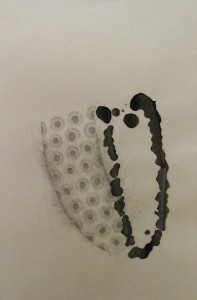 Consisting of twenty-one individual works, Kelliher-Combs’ Large Double Sided Drawings Series is lighter and more playful than many of her other works, though she employs many of the same patterns.  In a recent telephone interview the artist said that the pieces in this series are more playful because the process and the materials – graphite, ink, hair and wax – she used to produce them allowed her to work more quickly.  Kelliher-Combs also added that she didn’t want to over work or over think these drawings; she wanted them to be more open.  This is in sharp contrast to works such as Plum Walrus Family Portrait and the Unraveled Walrus Family Portraits Series, which evolved slowly with much contemplation about family, culture, history, the nature of art and other subjects that continue to hold the artist’s interest. 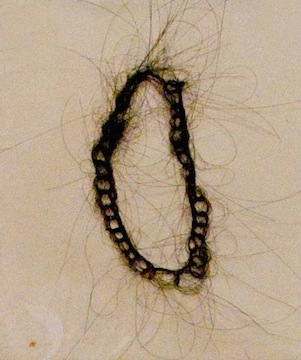 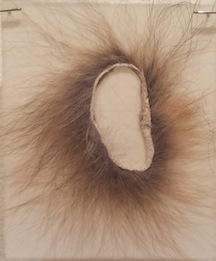 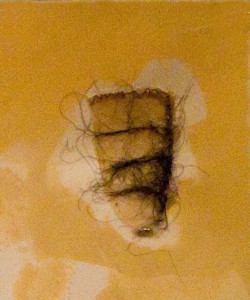 It was only through the suggestion of Andrea Hanley, Museum Membership & Program Manager at MoCNA, that I was able to acquire works from both the Double Sided Drawings Series and the Small Drawings Series by Sonya Kelliher-Combs.  While driving me to the Institute of American Indian Arts, Ms. Hanley pointed out the window and said, “You really need to go to the Zane Bennett Gallery.”  The next day I did so and added six works by Ms. Kelliher-Combs to my collection.

The Small Drawings Series, which is comprised of twenty-eight works, is different in tone than the Large Double Sided Drawings Series.  Although the works in this series also have a sense of playfulness, they appear exotic and sculptural as well.  Ms. Kelliher-Combs said that each piece in the Small Drawings Series is more like an object and that she looks upon these creations as “secret portraits” or “snapshots.”   She went on to say that all her work has a relationship to the human body and nature but because these specific works incorporate human hair it often makes people uncomfortable.  For the artist, such materials force the viewer to consider the nature of humanity.

As a collector, I remain fascinated by Sonya Kelliher-Combs’ work.  Her daring as an artist astounds me.  No technique or material is off limits for her creative process and I look forward to the next step in her enigmatic and haunting journey.