In just over ten years Annie Pootoogook went from novice to emerging artist to a star sought after on the international art scene.    Unlike many Inuit artists of previous generations, Annie does not present an idealized or romanticized version of life in the North filtered through memory.  Instead, she shows life in the Arctic as she experienced it.  Hers is a world in which traditional activities have been altered or supplanted by modern technology and one that has its share of contemporary social problems.  Interestingly, until recently the perception persisted that Inuit graphics were works that simply presented scenes of traditional Inuit life or benign images of Arctic animals.  To a point this has been true, but it is certainly not the whole story.

Pitseolak Ashoona, Annie Pootoogook’s grandmother and an icon of Inuit art, was among the first generation of modern Inuit artists to depict life as it was once lived in the Arctic.  Kananginak Pootoogook, Annie’s uncle, and her mother Napachie Pootoogook each produced a series of drawings documenting Inuit life that included controversial subject matter such as alcoholism, violence, suicide, spousal abuse, and the trafficking of women. 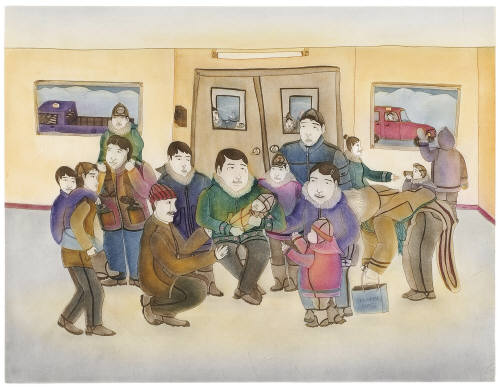 Following in this tradition Annie Pootoogook unflinchingly records on paper scenes of contemporary Inuit life.  The Homecoming, a 2006 print rich in observed details, captures a moment in time.  Family and friends, a range of emotions reflected on their faces, surround a man holding a baby.  Near him stand a woman and a toddler.  Is this the arrival of a newborn, the return of a sick child or a visit from distant relatives?  Part of the work’s pleasure is that it is open to interpretation. 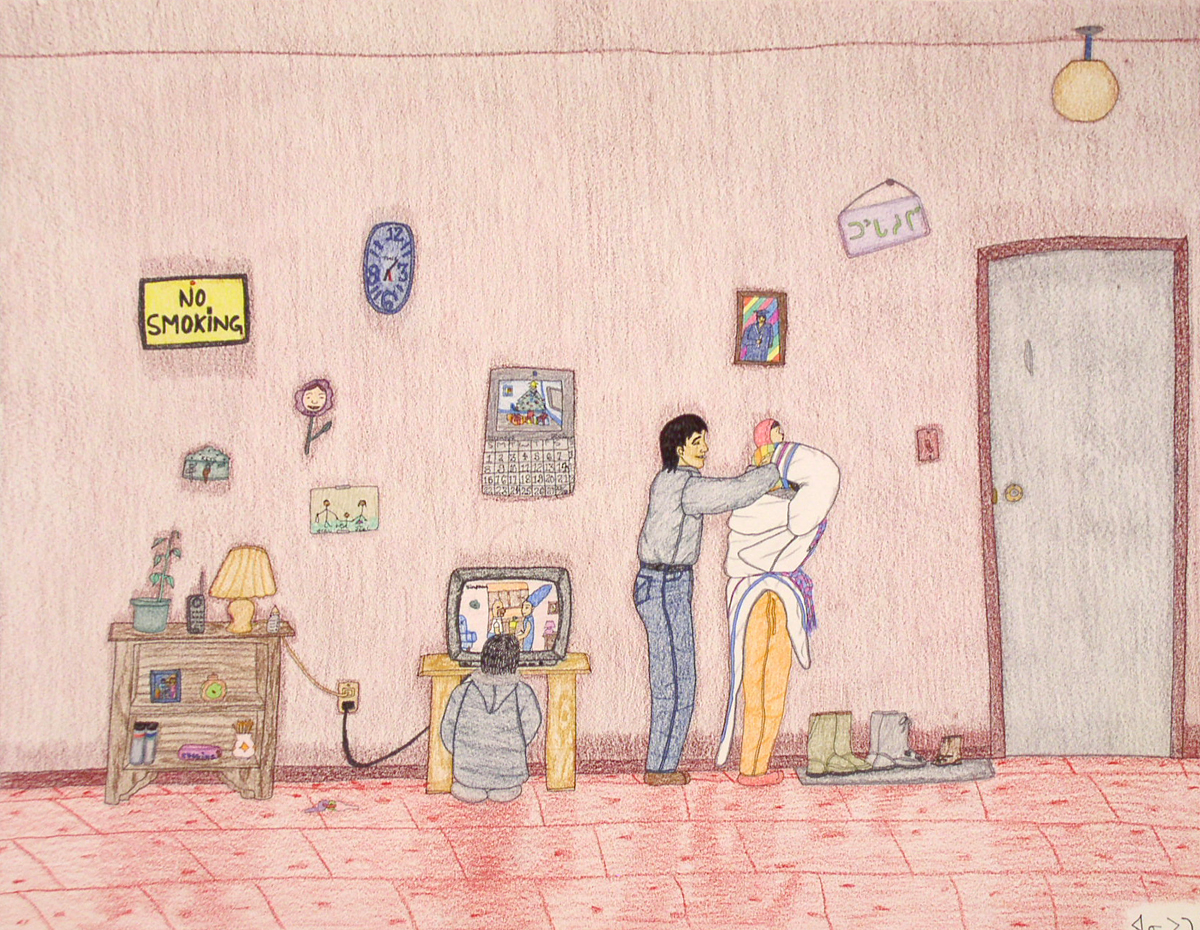 In the 2003 drawing Watching the Simpsons on TV, as in a number of similar works, Annie records the incursions made by mainstream culture into Inuit life.  Technology such as TV, video games, portable phones, snowmobiles, and ATMs frequently appear in her work.  Such images reflect the fact that Annie and others of her generation have been exposed to modern influences, something minimal or non-existent for earlier generations.  In addition to the outside world coming to the Arctic via the media, more and more Inuit artists are traveling to other countries and are being exposed to different cultures and new ideas.  This, too, is reflected in Annie’s work.

Annie is also not afraid to reveal unsavory aspects of Inuit society such as domestic violence, alcoholism, and sexual abuse.  Much like her mother, she has documented harsh realities as she has experienced them, often drawing on events in her own life and those she has witnessed.

Working in a number of genres has allowed Annie Pootoogook to cover a diverse range of themes.  Her portraits, for example, are a favorite with collectors.  Whether it is a well-known Inuit personage or an unknown, through her graphic skills Annie creates the illusion that the viewer, like the artist, knows the subject intimately. 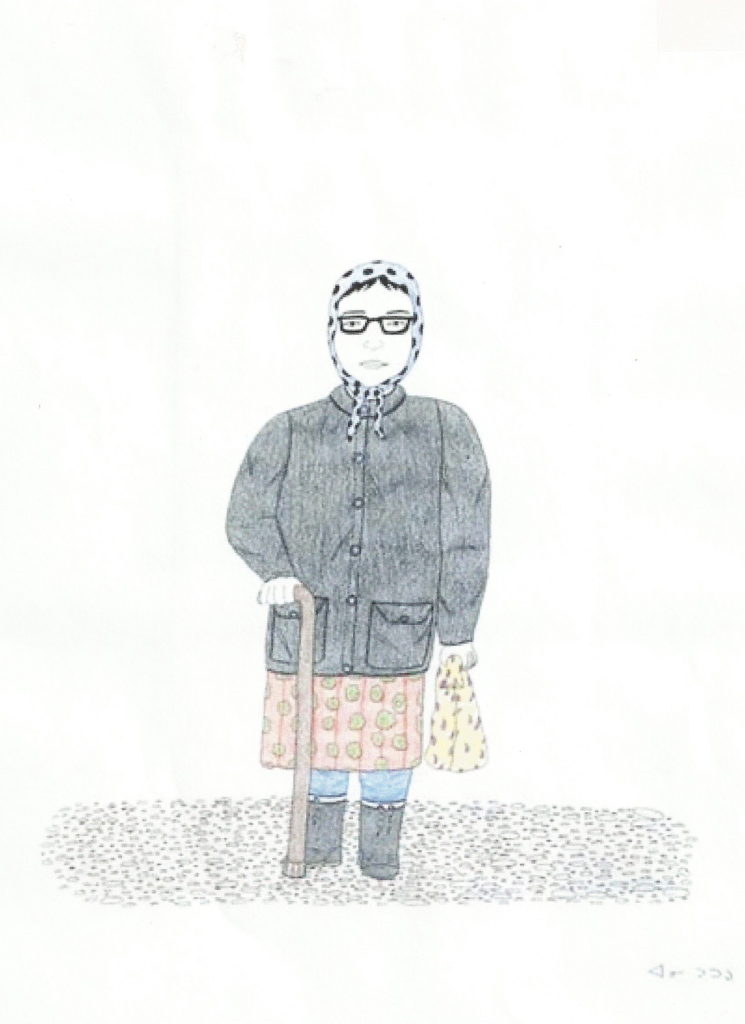 In A Portrait of Pitseolak, a 2003/04 drawing, Annie captures her famous diminutive grandmother, Pitseolak Ashoona.  Lovingly rendered, the drawing portrays the elderly woman wearing her signature back-rimmed eyeglasses.    The only image on the paper is that of Pitseolak standing on a small patch of rocky soil.  This allows the viewer to focus on the details of this individual: the polka dot headscarf, the lovely face, the black jacket over a flowered skirt, and a cane.  This work is at once a remembrance of a beloved family member as well as the likeness of a celebrated artist and a portrait of old age.

Both Composition (Windswept), a 2005/06 drawing and Windy Day, a 2006 print, present the same material and have the charm and delicacy reminiscent of Japanese prints that depict kimono-clad women unexpectedly caught by a gust of air.  However, in each of these works the subject is wearing a parka, an article of clothing emblematic of the Arctic.  We may never know the identity of the young women Annie portrays; in fact these two women may never have existed.  Nonetheless, we, too, are caught up in the moment, feeling the wind as it rushes past.  It is an exhilarating artistic experience. 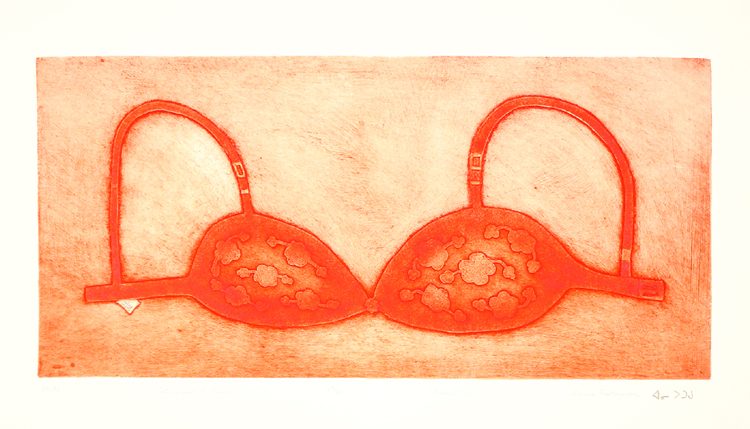 Perhaps the most modernist (and for some the most surprising) aspect of Annie’s work is her use of contemporary everyday objects as still life.  For example, the focus of 35/36, a 2006 print, is a red bra.  The image, at once surprising and humorous, confronts cultural stereotypes head on since most non-Inuit are stuck in a construct of life in the Arctic as it was lived in the past.  This print and other works like it such as Bra, a 2006 drawing, and Brief Case, a 2007 print of a series of men’s brief-style underwear, force the viewer to consider Inuit people and culture from the perspective of an insider who knows first hand the contemporary Inuit experience. 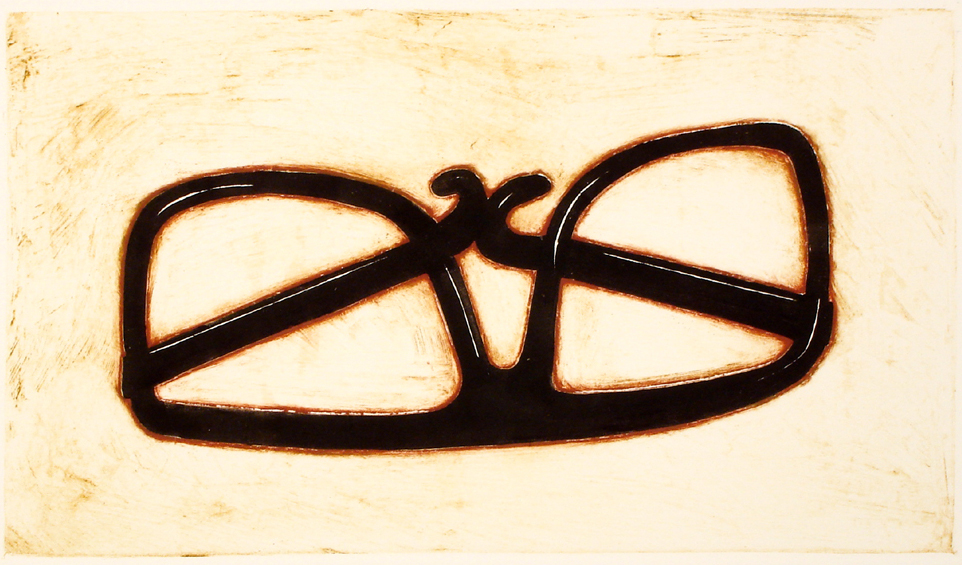 In Pitseolak’s Glasses, a 2006 collagraph and stencil, the artist once again recalls her grandmother by presenting the viewer with a large, highly detailed image of Pitseolak Ashoona’s iconic eyeglasses that is reminiscent of Pop culture and advertising, both of which have influenced Pootoogook’s art.  In this work, the artist has subverted the common Inuit printmaking practice of isolating one iconic image on the page by replacing the expected depiction of Arctic wildlife with a modern, functional object.  In doing so, Pootoogook has created a contemporary still life that is also a moving symbolic portrait of a beloved family member who has died.  All that remains behind is an object and the memories it evokes.  The work is a masterpiece, so modern in its simplicity. 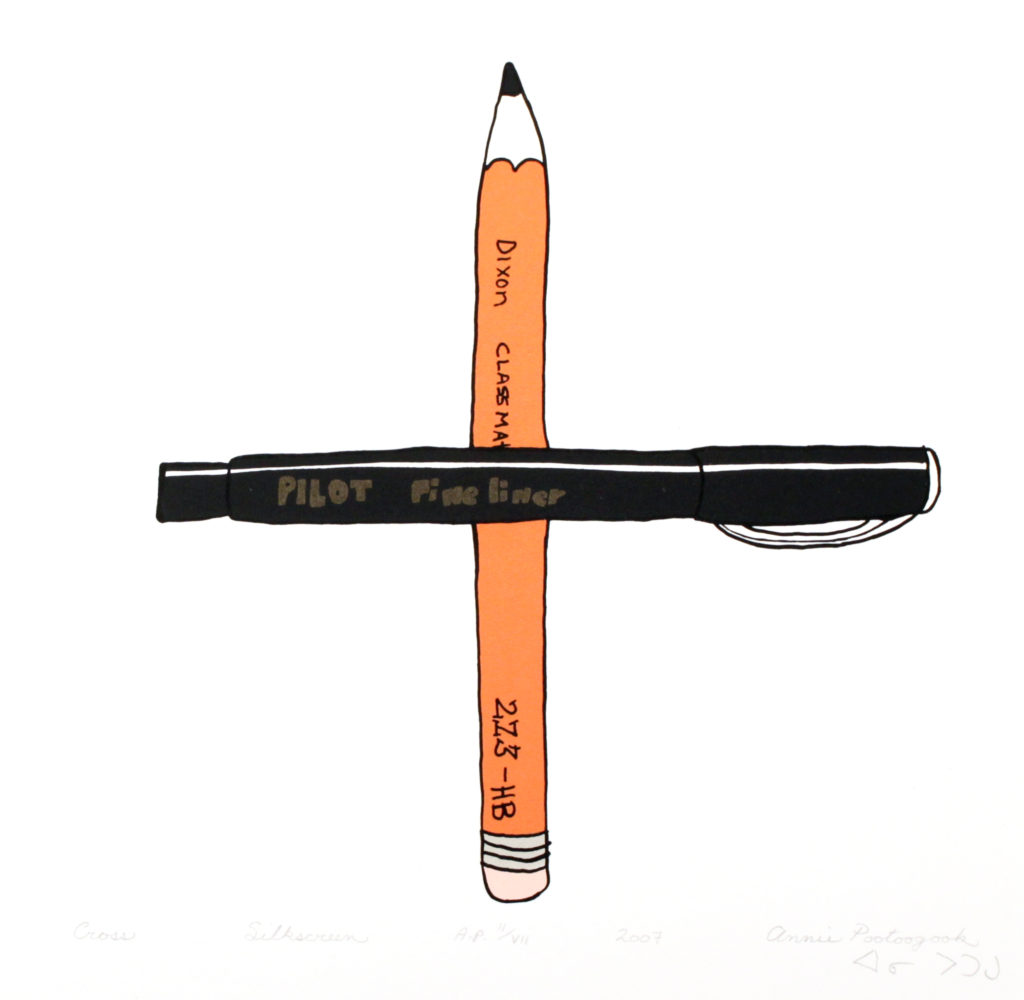 Cross by Annie Pootoogook, silkscreen, II/VII, Cape Dorset, 12” x 12” (2007).  Commissioned as part of a limited release for a book on Annie Pootoogook, published by the Alberta College of Art and Design (curated by Nancy Campbell with essays by Wayne Baerwaldt and Deborah Root).  Photo courtesy of Feheley Fine Arts.

Cross, a 2007 print, offers for consideration a Dixon yellow pencil lying perpendicularly across a Pilot fine liner magic marker.  Is this just a contemporary still life?  Is it a comment on the intrusion of Christianity on traditional Native beliefs?  Perhaps it is a reflection of the artist’s personal religious commitment.  Deceptively simple, the image evokes any number of interpretations.

In spite of her celebrity or, perhaps sadly, because of it, Ms. Pootoogook’s life has taken a downward spiral.  She now lives on the streets of Ottawa with her boyfriend, a panhandler, with whom she has had a child.  Both are dealing with substance abuse.  Pootoogook has begun to draw again and sells her work to those passing by for under $50.00.  Her drawings once commanded prices in excess of $2,000.00.

As a collector, I find Annie’s work bold, insightful, and thought provoking.  The content is often startling, sometimes even shocking, but it is never clichéd.  Annie’s is a unique voice.  Her work is neither naïve nor primitive.  Rather, it is thoroughly contemporary.  In the end, I hope she is able to make her life as wonderful as the art she produced.