The most exciting time of year for collectors of Inuit prints is the October release of the Annual Cape Dorset Print Collection, consisting of over thirty works.  Since prints are produced in editions of fifty each, with the rare exception of one or two prints with a run of one hundred, anticipation is high among aficionados in Canada, the U.S. and Europe.  I number myself among those who, each year, faithfully wait to see what the Dorset artists and printers have created.  In the past, a number of Canadian Arctic communities released annual print collections but, over the last fifty years, only Cape Dorset has consistently been able to attract and maintain a large group of international collectors.  This is due to the  support of the West Baffin Eskimo Co-operative, the marketing and promotion of Dorset Fine Arts and, most importantly, the willingness of the Cape Dorset artists and printers to embrace creative and technical innovation and experimentation.

Because the quality of Cape Dorset prints is always artistically exceptional, choosing which works to acquire is always a challenge.  Not only must the pieces selected be artistically significant, they must also fit into the rest of my collection.  Each year over thirty works must be considered.  Since, for most collectors, money is always a consideration, only a few prints are usually acquired.  After repeatedly looking at the 2015 offerings, the first elimination narrowed my choices to six prints: Sunday Afternoon by Kudluajuq, Ashoona, School of Fish by Cee Pootoogook, Polar Bear in Camp by Papiara Tukiki, Twilight Raven and Epic Whale Hunt both by Pitaloosie Saila, and Courting Birds by Saimaiyu Akesuk. 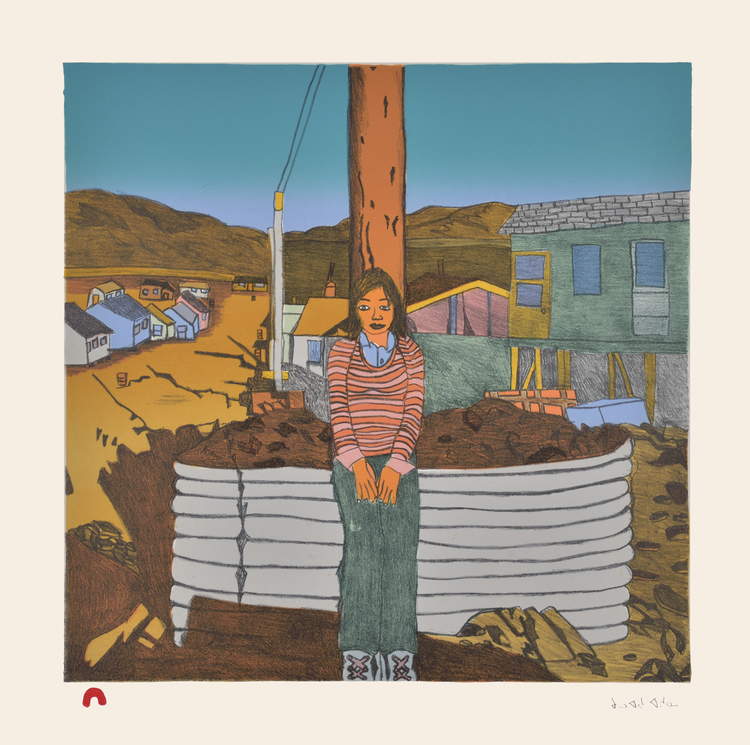 Although some bright colors are employed in Sunday Afternoon by Kudluajuq Ashoona, an air of melancholy seems to infuse this work.  The viewer is left to ponder what the woman is thinking about.  Is sitting around all there is for her to do on a Sunday?  Her posture is slightly slumped and she looks directly out at the viewer.  Although I was initially drawn to the color, charm, and intimacy of this print, I rejected it because it was too similar to works by the artist already in my collection. 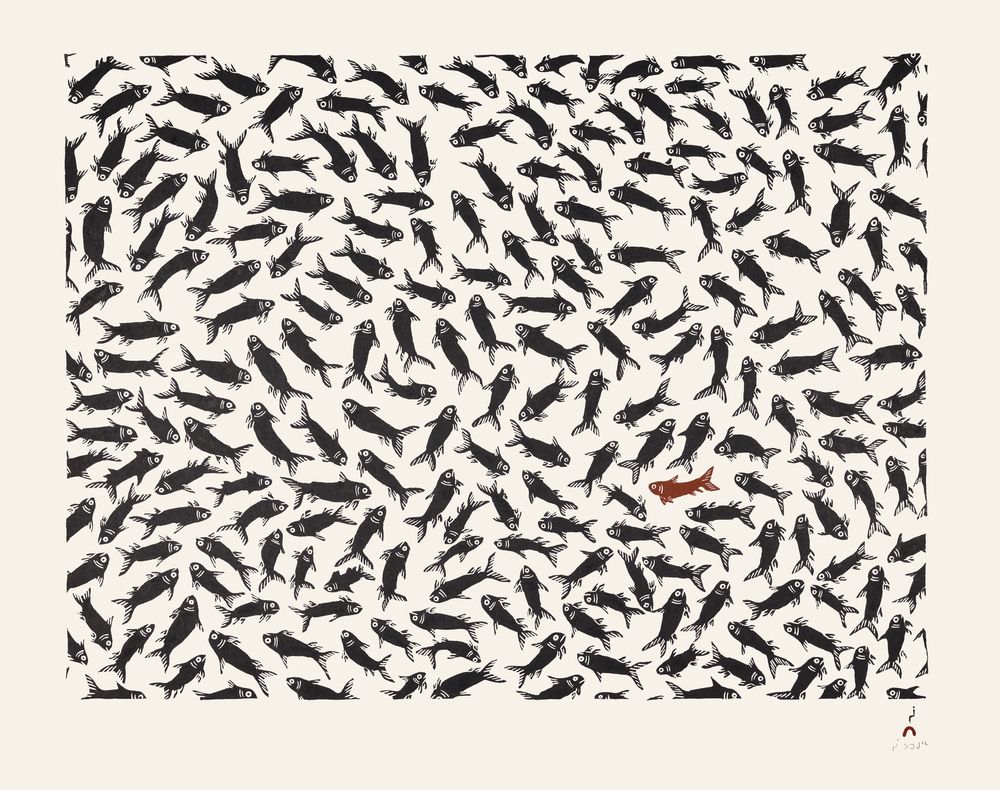 Next up for scrutiny was School of Fish by Cee Pootoogook.  I found the multiple images of fish, especially the one odd one, thought provoking and visually interesting.  It is done in an inventive and humorous way.  I particularly like how the artist plays with the viewer’s perceptions of representation and abstraction.  I was also intrigued by the fact that the artist had also printed the piece himself.  Ultimately, I decided against this print because it, too, was extremely similar to another work by Cee Pootoogook that I acquired last year. 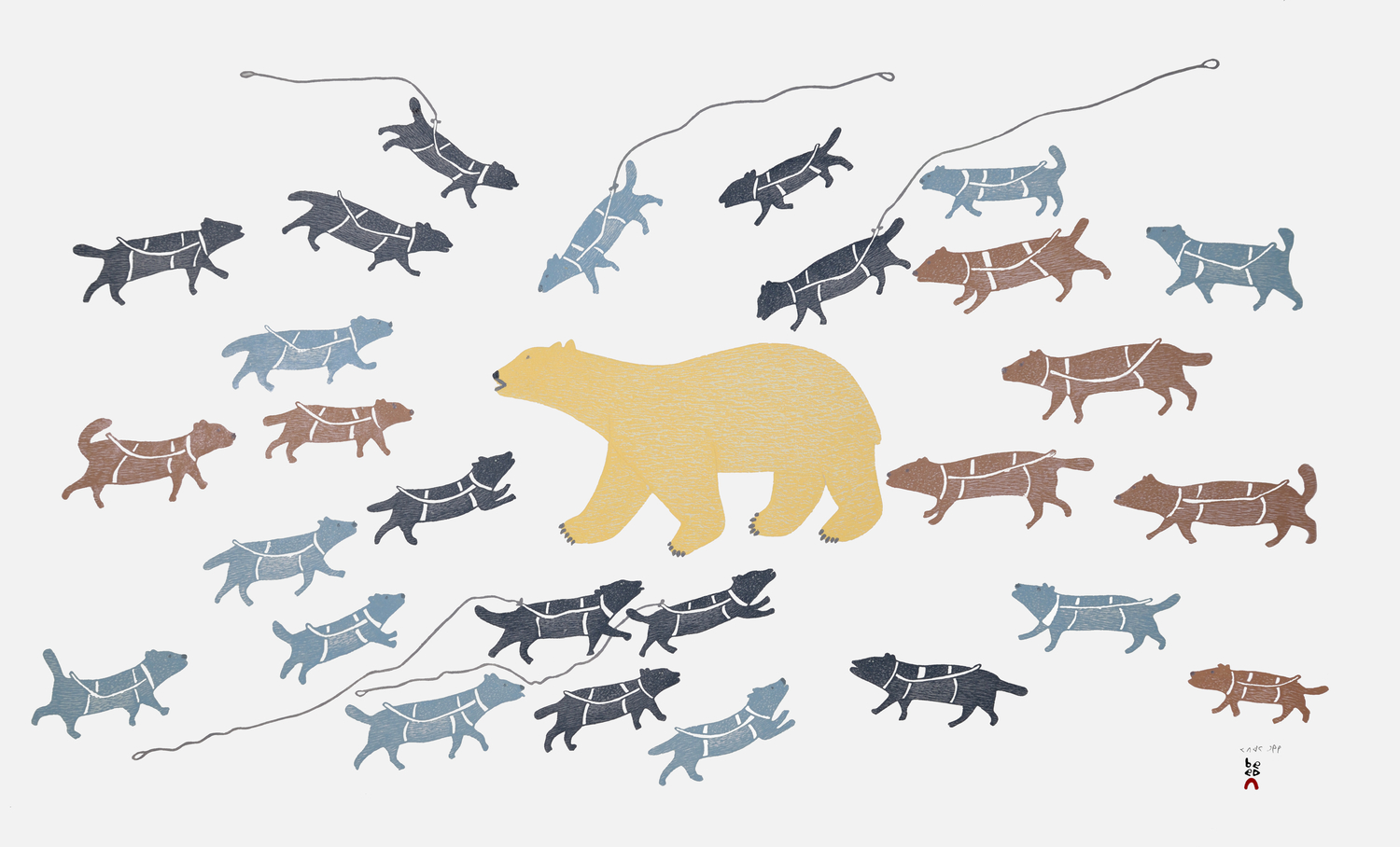 It is hard to resist Polar Bear in Camp by Papiara Tukiki.  The print charmingly reflects the artist’s memory of the nomadic life she once lived on the land.  The bear, made the center of the viewer’s attention, is dramatically surrounded by a pack of sled dogs (portrayed in non-natural colors) that have been released to keep the animal at bay.  Despite its many strengths, I decided against this print because it was reminiscent of many works already in the collection and very much like another print I was considering. 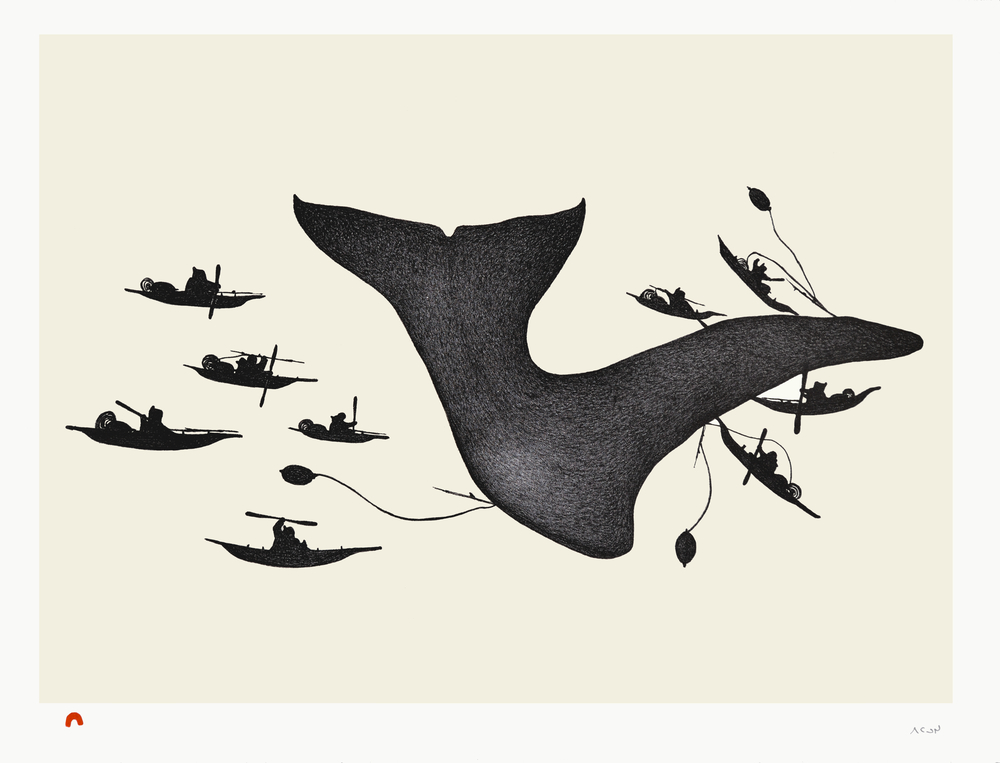 In Epic Whale Hunt, Pitaloosie Saila not only references some of the earliest Inuit prints but she is also being subtly subversive.  The scene is classic but she employs the use of positive and negative space in ways that are very contemporary.  The fact that most of the whale is below water is suggested in the way the artist has “drawn” the image.  Pitaloosie’s use of line to create the idea of ocean in the mind of the viewer is brilliant and the reason why I chose to acquire this print over others dealing with traditional themes. 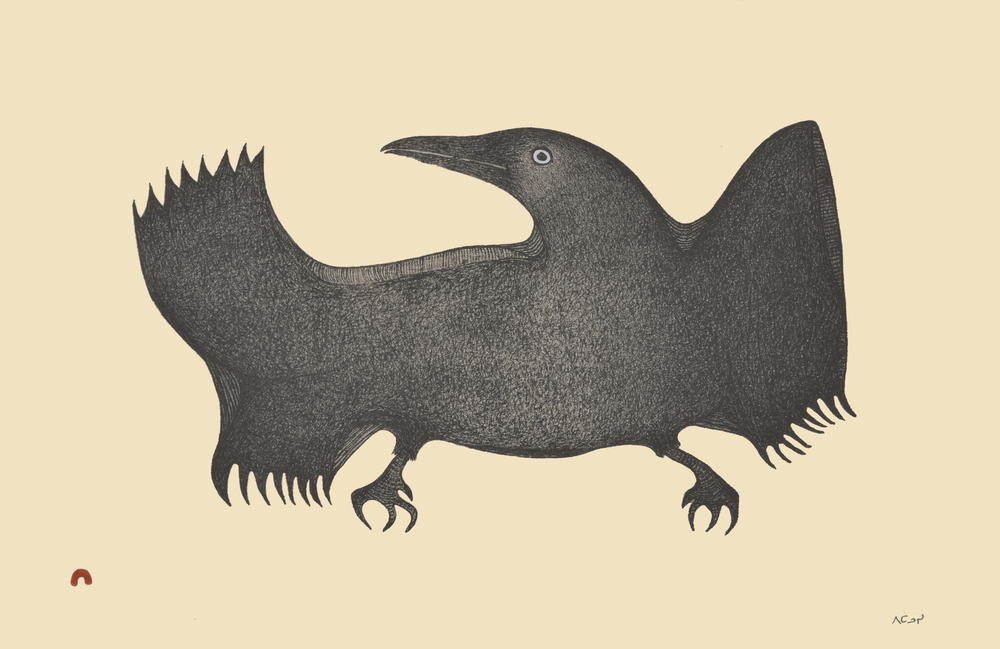 Once again, in Twilight Raven Pitaloosie Saila reveals her penchant for being an artistic revolutionary, though she does so in understated ways.    For the most part, collectors of Cape Dorset prints have tended to prefer colorful and charming images of Arctic wildlife but the artist subverts the tried and true formula of filling the page with a vibrant, iconic image of an animal.  Her raven, black against a cream page, is somewhat abstracted, with claw-like appendages at the ends of it’s wings.  It is certainly not a slavish representation of a bird.  In the end, I chose to acquire this work because it is visually interesting, darkly humorous, and undermines expectations about Cape Dorset prints. 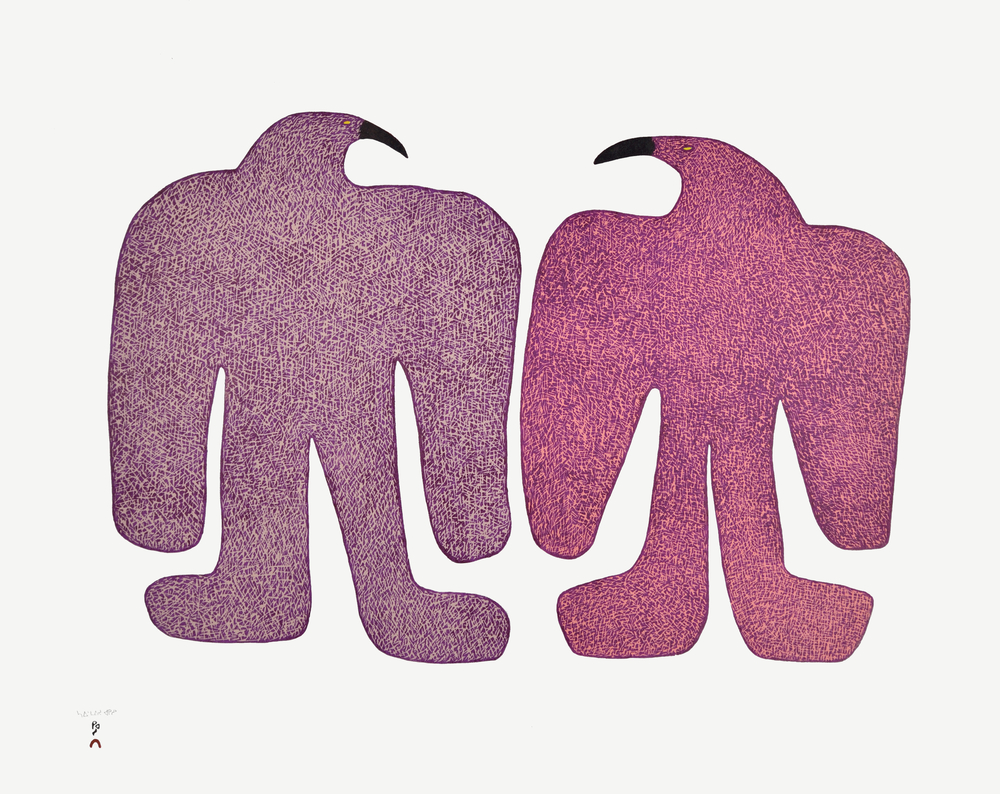 These days I am mostly drawn to abstract works.  Also,  in general, although I am an animal lover I am usually not drawn to images of them.  As a collector of Inuit art, that is an odd statement, at the very least, but there it is.  I particularly avoid images of animals that are deemed cute.  I do have images of animals in my collection but when I choose such works it is for something very specific about the piece.  Such was the case with Courting Ravens by Saimaiyu Akesuk.  The work is an abstracted representation of two brightly colored birds.  It is large, bold, and decidedly humorous, something I find irresistible.  The piece is so finely printed that it is easy to mistake it for a drawing because of the strokes of color moving in different directions that are clearly visible.  Although the title of the print suggests that it is about romance, the artist has stated in interviews that the two figures actually represent her and a good friend and is about the look they often give each other that often turns into a laugh.  It should be noted that, generally, it is not the artists who title their works.

The 2015 Cape Dorset Print Collection contains many works that are brilliantly executed as well as visually strong.  This is usually the case with Cape Dorset prints.  Such excellence is a joy but, except for the very few for whom money is no object, it makes it difficult for collectors to winnow down so many fine works to a final few choices.  I always find the process difficult, frustrating, exhilarating and extremely satisfying.  Whether or not I buy a piece greatly depends on my immediate intuitive response to it; analysis comes later  All collections are idiosyncratic; no two are alike.  Each reflects the tastes, personality, interests, and artistic biases of the collector.  Some collect in a consistent vein, acquiring art by favorite artists, pieces that typify an artist’s output or works on specific themes.  My process is more complicated, especially with regard to prints.  Since I have an overview of the history of the Cape Dorset Print Collection, I often acquire works that are atypical because I feel they are artistically significant.  Choosing from among so many fine prints in the 2015 Cape Dorset Print Collection was a difficult task.  Sunday Afternoon, School of Fish, and Polar Bear in Camp are incredible creations and it was hard to eliminate them.  However, after a great deal of careful deliberation, I feel that Epic Whale Hunt, Twilight Raven and Courting Birds are the best fit for my collection.