This is an exceptional large jar by Nathan Begaye.  He was a unique innovator among Pueblo and Navajo potters.  His ethnic connection to both Hopi and Navajo let his clay art flow between the two distinctive styles and yet find its own unique space.  His work used traditional designs, forms, and techniques, yet somehow appeared very modern.  This large jar is in the shape of a Navajo “tus”, or cooking vessel.  The narrow base on this traditional form allowed them to be put into the ground for stability when cooking.  The jar is stone polished and painted with numerous clay slips for the coloration.  Each of the colors was stone polished when it was applied before firing.  The outside of the jar has a lightning pattern and the inside has clouds around the rim.  The jar has a great story that goes with it:

I originally purchased this jar from Nathan at Indian Market in 1997.  I’m excited and a bit amazed to have it back in the gallery.  I remember being fascinated at all the various colors used on the peice.  Nathan told me he fired it upside down so that the jar would be black inside as if it had been used. He said he tried to use all the “rare” clay colors on the outside.  Check out the purple, and blue, which were always the least common clay colors and he would normally use them sparingly.  Back in Scottsdale, the jar definitely stood out for the time.  It was also the first time we go the cover of “Art Talk” magazine, which was a major art magazine at the time.  There is a photo of the cover with the jar as well.  The last photo is one that I took of Nathan when he was living in Phoenix.  He moved here for several years and I would go to his apartment to see what he was working on and listen to his stories about his pottery.  He was definitely a character!  Now..if you ever want a REALLY good story, ask me about the jar in front of him that he is working on…now THAT is a story! Charles S. King

The jar sits on a woven ring, which Nathan wove and it is tied together with leather.  The piece is signed on the bottom in the clay, “Nathan Begaye”.  It is in excellent condition with no chips, cracks, restoration or repair.  The jar has a second-place ribbon from the 1997 Santa Fe Indian Market.  Definitely one of the important pieces of his clay art! 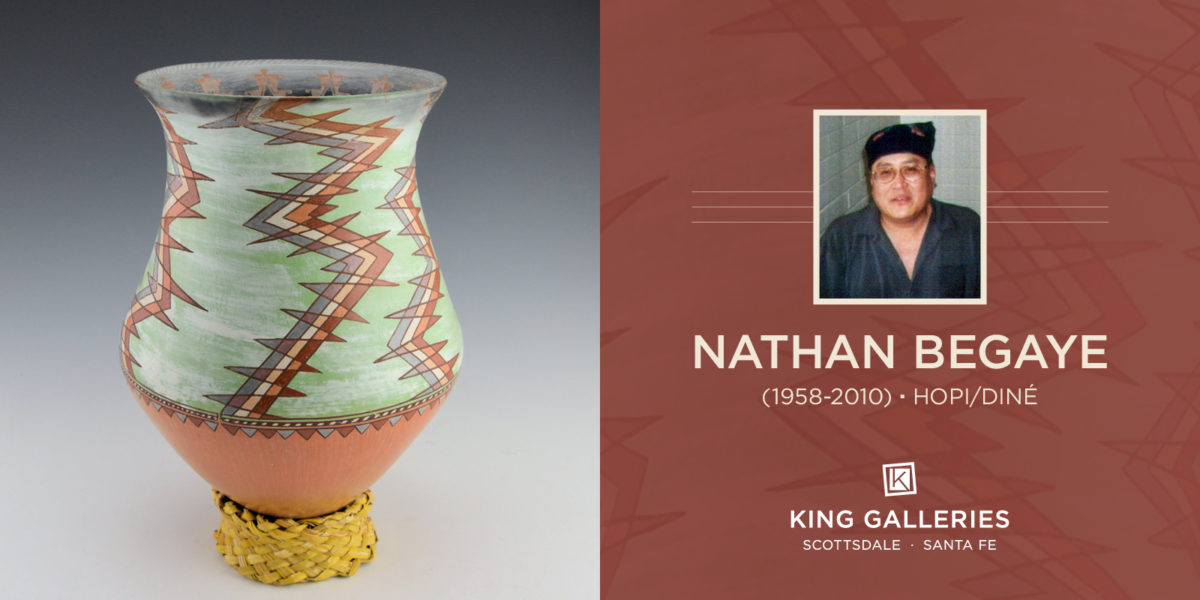 Nathan Begaye was a unique innovator among Pueblo and Navajo potters. His ethnic connection to both Hopi and Navajo let his work flow between the two distinctive styles and yet find their own unique space. His work used traditional designs, forms, and techniques, yet somehow appeared very modern. Nathan was one of the innovators of Native pottery and was featured in numerous books, including "Free Spirit: The New Native American Indian Potter", "Beyond Traditions" and others. His pottery can also be found in the permanent collection of the Heard and other museums.