This is a detailed jar Debbie Clashin.  She is a cousin of noted potter Mark Tahbo and a descendant of Grace Chapella.  Debbie has quickly become well known for her large-sized traditional Hopi-Tewa pottery. The jar has a round shoulder and sloping sides.  The short neck is slipped a deep red.  The jar is painted with bee-weed (black) and clay slips.  The designs are inspired by Hopi-Tewa ceremonies.  One section has the prayer feathers above rain and cloud designs. The separating sections have a design she says is the kivas on the mesas looking out over the fields (the diamond shapes) with the water coming up through the ground.  There are lots of thin lines and tightly painted designs on this jar!  Below the shoulder are the “sunrise mesas” with the sun coming up and the surrounding clouds and the use of two different colors of clay.  The jar was traditionally fired with exceptional fire clouds across the surface.   It is signed on the bottom “Debbie Clashin” and a pipe for her “Tobacco Clan”.  There is certainly a wonderful depth of coloration on this jar, matched by its complex painted designs. 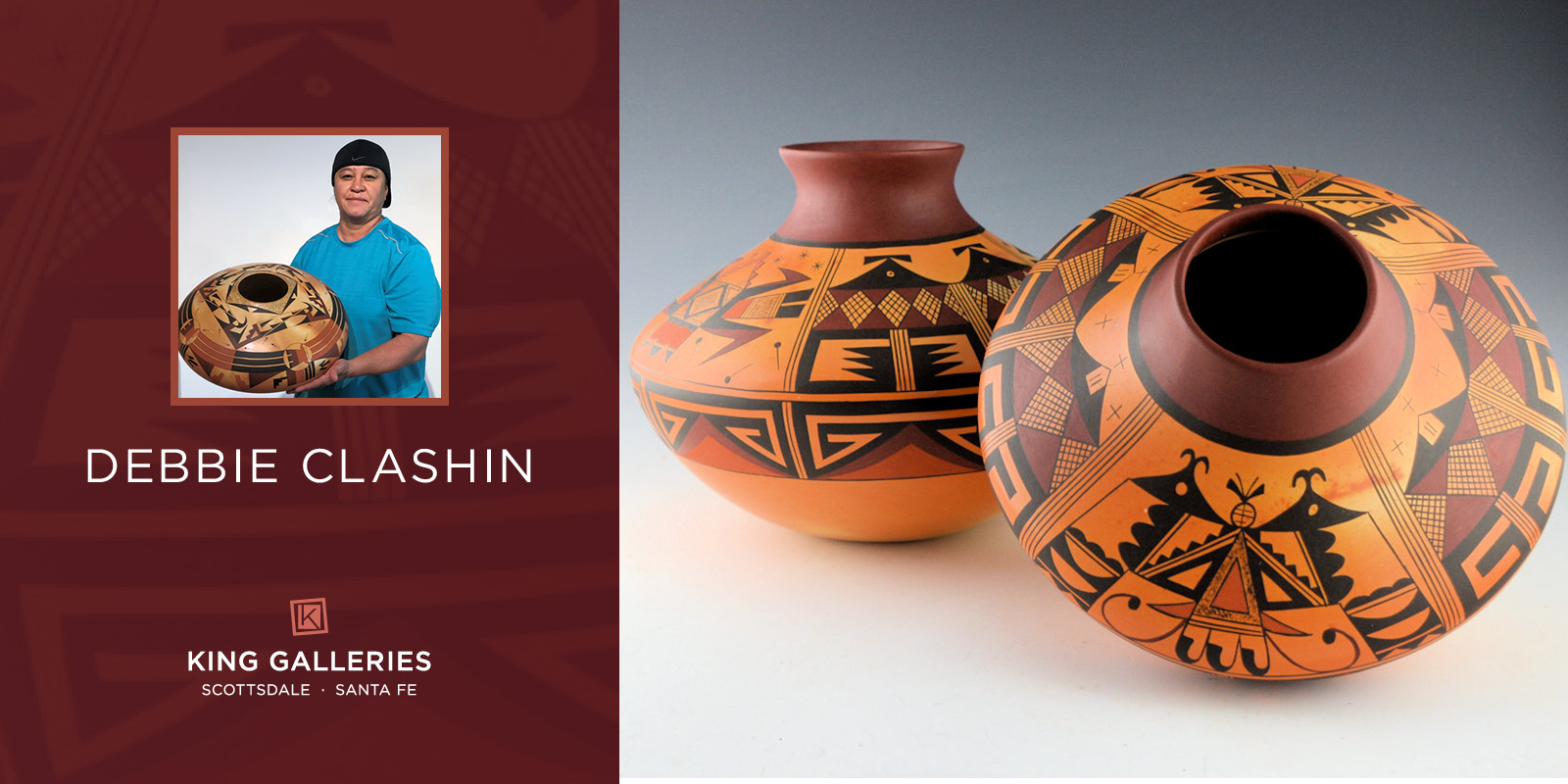 Debbie Clashin, a member of the Hopi-Tewa Tobacco Clan, was born to Lorena and Morris Clashin.  Among her cousins are Dianna and Mark Tahbo, Dorothy Ami, and Larson Goldtooth.  Debbie was exposed to pottery making for much of her life but only began to really learn the art herself around 2010 from Dianna Tahbo as her primary teacher.

Debbie Clashin has shown her work in a juried competition at the Museum of Northern Arizona in Flagstaff, earning a 1st place ribbon. She felt it was a tribute to her teacher Diana Tahbo, with further instruction from Mark Tahbo.  Debra also entered a piece in the SWAIA Santa Fe Indian Market juried show in 2015, earning a 1st place ribbon for piki utilitarian pottery bowl.
Debbie enjoys making larger jars with small openings and flat shaped seed pots. Her favorite designs are stylized interpretations of ancient Hopi symbols, bird elements, and blessing designs.