Congratulations to Max Early for the publication of his first book of poetry.  Max is a well known potter but also quickly become as famous for his poetry!

We currently have signed copies in the gallery!

“In Ears of Com: Listen, Native American potter and poet Max Early gracefully details both the everyday and the extraordinary moments of family and community life, work and art, sadness and celebration at the Laguna Pueblo of New Mexico.With in the four seasons-Ty’ee-Tro, Kushra-Tyee,Heyya-Ts’ee, and Kooka—the beauty of Early’s writing beckons the reader to accompany him on the journey between ancient and modern times.Including an historical Preface by the author,an Introduction by Simon J. Ortiz, and photographs of Early’s family and award-winning art, this debut poetry book is profound in its welcome and its teachings.

‘Early’s poems take us into the cultural continuum of a contemporary Laguna Pueblo artist. Each poem is pottery of words, complete with designs to bring rain, to remember and praise the earth and sky path we humans travel. Early’s poems are earthy, real and compelling. I keep hearing them, like songs emerging from the creative earth.”

‘We are thankful for these poems that cup us through the seasons,past the drought f a spiritual slumber. Like a weathered olla recalling the hold of cold water,we are replenished and bathed anew.We should heed our want and need to the bounty of their beauty and submit ourselves to the lessons therein. Shhh…the poems are speaking:Listen!”

-Levi Romero, “A Poetry of Remembrance and In the Gathering of Silence”, New Mexico Centennial Poet

‘Poetry and pottery are art forms simultaneously ancient and yet made for the moment. The words flow like coils of clay to surround the reader and build a vision of the mind and soul of the poet. Potter Max Early’s poetry in ‘Ears of Corn: Listen” reveals much about life in his native Laguna Pueblo. More importantly it gives a modern voice to an ancient culture making it relevant for both a new generation and also those outside the Pueblo. The poems tell his story of how, “Breaking gender taboos didn’t turn me to stone” and the delicate balance he finds between embracing modernity and reveling in the past. The use of native Laguna words adds grace to the poems, much like a perfectly painted vessel; they lyrically draw the eye, create balance and provide a connection to the viewer. Not only is Max’s collection of poems worth a read, but a second read as well. The first time they may just seem pretty, but the second time the novelty is gone and the substance remains. Much like Max’s pottery.’
Charles S. King, Author of “Born of Fire: The Pottery of Margaret Tafoya” and “The Life and Art of Tony Da”

Max Early was born into a tradition of potters and clay. He creates traditional pottery in order to help save the art of pottery making in Laguna Pueblo.When he began to focus on writing, he continued his passion for celebrating his family, culture, language,and the enchanting New Mexico landscape. 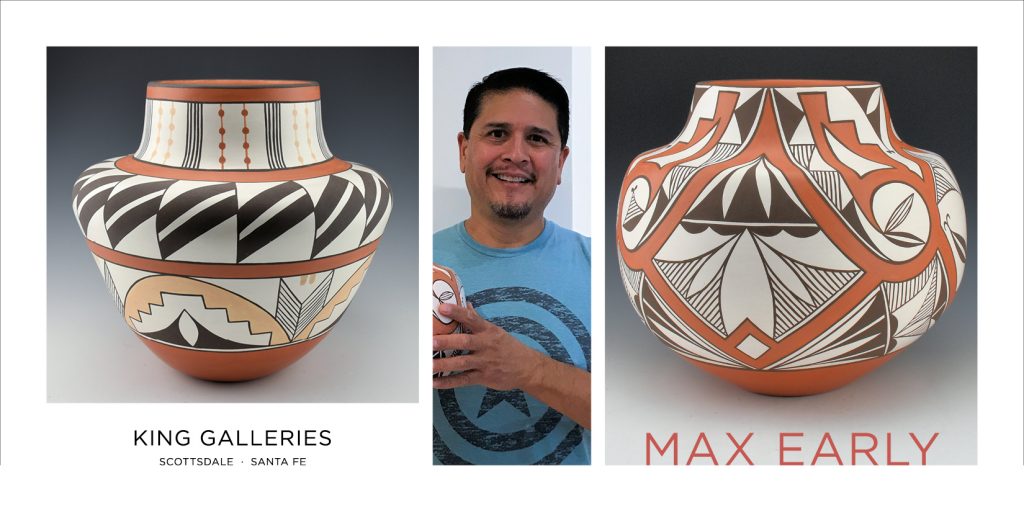 Max Early is one of the few potters from Laguna Pueblo. He is a grandson of Clara Acoya Encino who, along with Gladys Paquin, taught him to make pottery. Max is part of the Turkey Clan in the pueblo that is shown in the signature on his pottery. He is well known for his revival of classic Laguna shapes and designs on his pottery. More recently he has been creating more innovative shapes and designs on his work. Max is also a poet and has incorporated some of his poems on his pottery. He has been an award-winning potter since 1994 at Santa Fe Indian Market and he continues to push the boundaries of both traditional and non-traditional pottery at Laguna Pueblo.  Check out his book, “Ears of Corn: Listen“.