This is an exceptional large Rosemary Lonewolf.  It is a large seedpot and it is fully designed.   The large central figure is etched into the clay in a Mimbres style.  In one hand he is holding a rattle and the other a phone.  As you view the piece, the story is about Natives living in “two worlds”. The modern world (to the figure’s right) and the traditional world (to the left).  As the piece is turned there is a plane in the sky and the buildings of a city. Near the base is a lightly etched computer circuit board.  Then Rosemary has created a water design separating the modern and traditional world. She has corn, a Pueblo, and the water serpent (avanyu) at the base.  Considering that the piece was made in the 1980s’, the Modern Mimbres figure in the center is standing on the “MTV” logo.  Everything about this piece is thoughtful, provocative, and after nearly 40 years, it still remains timely!  The background is all small circles, which are very time-consuming!  The designs are highlighted with blue, green, and white clay slips. The seedpot is in excellent condition with no chips, cracks, restoration, or repair.  It is signed on the bottom, “Apple Blossom”.  Definitely an important piece from Rosemary Lonewolf. 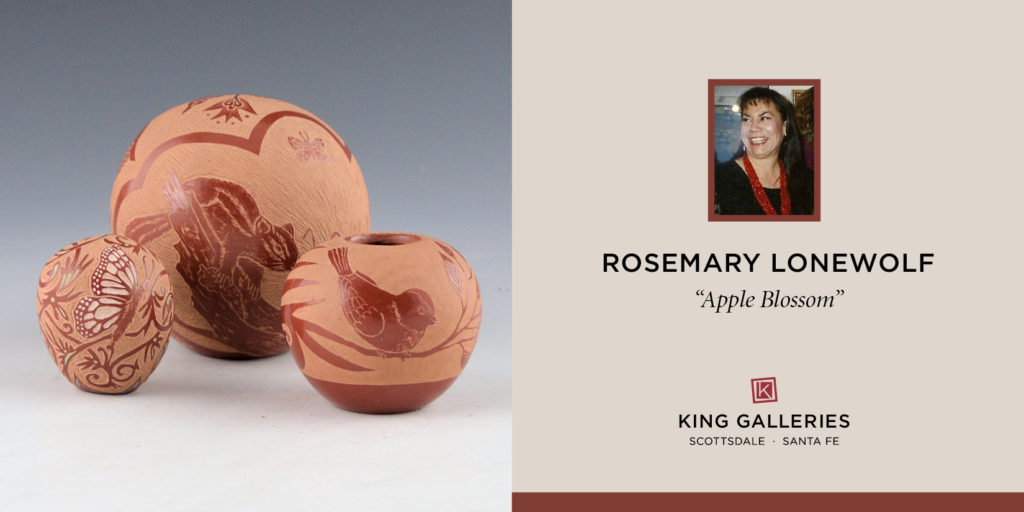 Rosemary “Apple Blossom” Lonewolf is a daughter of Joseph Lonewolf and learned to create similar highly polished and delicately etched pottery. Rosemary has been featured in numerous books, including “Beyond Traditions” and has received numerous awards for her intricate pottery and use of realism in her designs.