During the 1950s Maria Martinez made and polished pottery and signed using her Tewa name, “Maria Poveka”.  Poveka means “Water Lilly”.  This water jar is one of her classic shapes with a round body, sharp shoulder, and a short neck.  The jar has an elegance of form from top to bottom.  It is fired to a dark black coloration.  The jar is signed in the clay on the bottom, “Maria Pove’ka”.   It is in very good condition with no chips, cracks, restoration or repair. 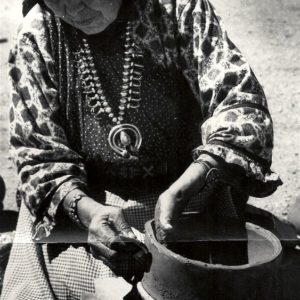 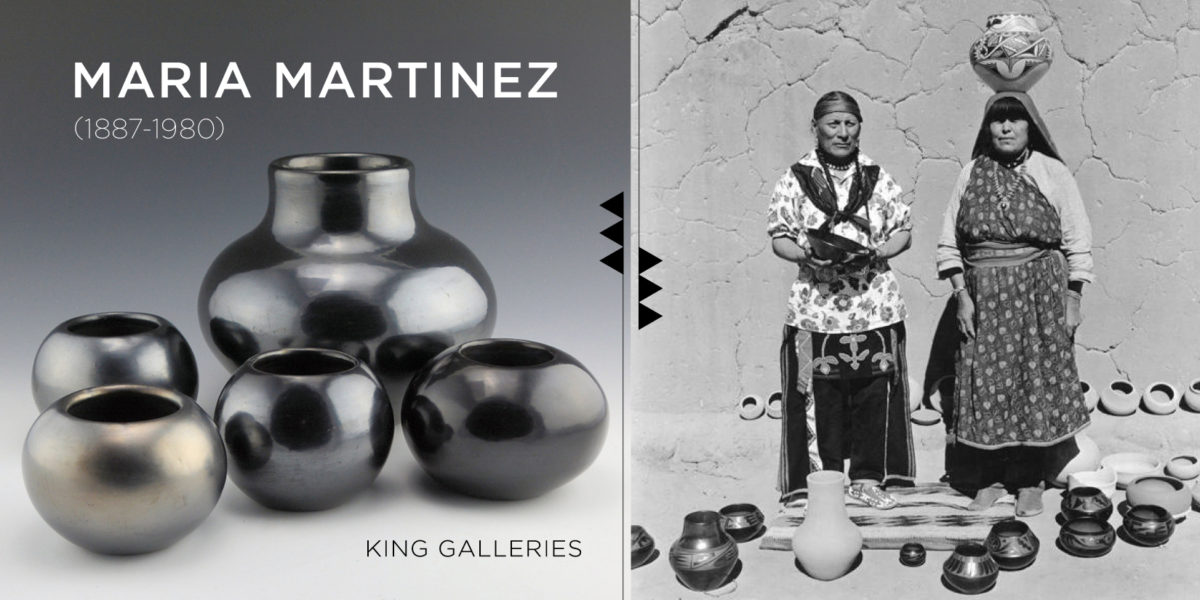 Maria Martinez is undoubtedly one of the best known and most influential Native potters of the 1900s.  She became famous for her creative pottery as well as traveling to museums, World Fairs, and other events throughout her lifetime to promote Pueblo pottery. Maria learned to make pottery from her aunt Nicolasa Montoya.  Around 1919-1920, Maria and her husband Julian Martinez, created the process for the "black-on-black" style of pottery.  This unique process allowed matte designs to be painted on a stone polished surface and the entire piece to be fired black. At the time, this unique and distinctive style of pottery quickly became a success, and by 1922 was made by nearly every potter at San Ildefonso Pueblo.  It helped to change the economy of the Pueblo as pottery became a successful career. Maria worked with Julian until his death in 1943. She then worked with her daughter-in-law Santana who was married to her eldest son, Adam.  Again, she would make the pottery, and Santana would paint the designs.  In the 1950s, Maria made pieces that were plain and signed with her Tewa name, "Pove-ka," which means "Water Lilly." Beginning in 1956, Maria started to work with her son, Popovi Da.  Maria made the pottery, and Popovi would paint the designs.  These are often considered among the best of her career after the early work with Julian.  Popovi Da worked to revive polychrome pottery, created the sienna (double-fired) coloration, and also made redware vessels.  Maria also made a few pieces with her grandson, Tony Da, whom she also taught to make pottery.  Tony was one of the first male potters at San Ildefonso and had an exceptional career for his pottery and paintings.  He was the subject of a book, "The Art and Life of Tony Da" by Charles S. King and Richard Spivey. Maria Martinez was the subject of several books during her career.  Alice Marriot wrote the book, "Maria: The Potter of San Ildefonso" in 1948.  Richard Spivey also wrote a book on her entitled, "Maria." Both were essential additions to the collector knowledge of this vital potter. Maria was also the subject of numerous museum exhibitions.  Her pottery can be found around the world in various museum permanent collections. Today, Maria's descendants include Barbara Gonzales, Cavan Gonzales, and Marvin Martinez, who all continue to make traditional San Ildefonso pottery.  Jarrod Da is known for his modernist paintings.